With more and more people taking to two wheels to get about town, the battle between cyclists and drivers has swelled. Trott though has hit out at cyclists who make things hard on themselves through their irresponsible behaviour on the city’s streets.

Cyclists are often criticised for jumping red lights, riding on the pavement and recklessly weaving in and out of traffic, angering other road users.

Trott added though that it is “not always the car’s fault” and that cyclists “should obey the rules of the road because we’re all road users.”

She praised Mayor Boris Johnson’s £913 million fund for cycling, which will introduce schemes and measures to make cycling safer such as new cycling superhighways and bike lanes across the capital.

She also called on politicians to make it compulsory for all cyclists on the city’s streets to wear a helmet.

“I think it should be a legal requirement to wear a helmet. So many lives have been saved by them and it saved my sister’s life,” Trott said of her older sister Emma’s 2010 accident in Belgium when she was hit by a car.

The law does not currently require cyclists to wear a helmet.

There were 14 cyclist deaths on London’s roads last year and six this year, the most recent being 67-year old Dr Clive Richards, who was killed when he collided with an HGV in north London earlier this month. 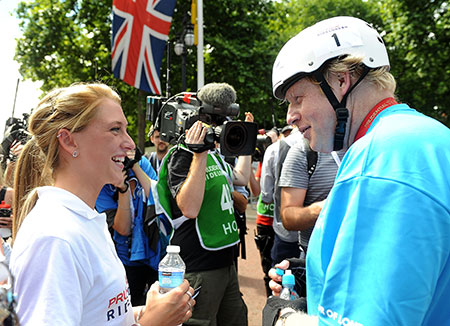 Where to hop into Easter

Nicolas Sarkozy and Carla Bruni give birth to a girl