The story of the four likely lads who conquered the world will be told by locals for years to come. But these days, a new generation is looking forward, not back, and the buzzing artistic, creative scene and quirky nightspots that have sprung up with it are worth the trip alone.

Between two imposing cathedrals on the side of a hill lies one of Liverpool’s classiest streets. Hope Street is a catwalk of Liverpool’s creative talent and a great place to immerse yourself in its unique cultural scene. HOAX Liverpool hostel is the ideal place to base yourself right in the heart of the Cavern Quarter and it’s a short walk to the Metropolitan Cathedral at the top of Hope Street.

Strolling down the street you pass the home of the Royal Liverpool Philharmonic Orchestra, the Liverpool College of Art, the Liverpool Institute for Performing Arts – founded byPaul McCartney – and the recently refurbished Everyman Theatre.

Thereare also plenty of lovely pubs and restaurants dotted around – check out the Clove Hitch for some top British cuisine and craft beers. Hope Street will be the buzzing hub of the 2014 Liverpool Biennial, a major celebration of British contemporary art running from early July to the end of October. For four months Liverpool will be alive with shows and urban exhibits far too numerous to mention, and Hope Street will be the main nerve.

At the foot of Hope Street you’ll find the formidable neo-Gothic structure of Liverpool Cathedral. Even if that wouldn’t normally be your thing, it’s worth taking a look inside the world’s longest cathedral for the stunning view its 331ft tower offers. From there, head back into town via ‘The Black-E’, a striking old church on Great George Street once coated in a grim layer of industrial grime, now a contemporary arts and community centre. Standing wonderfully contrasted next to it is the oriental arch over Nelson Street, the gateway to Liverpool’s Chinatown, where the oldest Chinese community in Europe lives.

For an utterly unique night out, you have to head to the Baltic Triangle. It is rapidly emerging as a buzzing edgy artistic quarter and a magnet for Liverpool’s hipster community. An echo of Liverpool’s industrial past, the whole area has been reclaimed as an arty district where you’ll find musicians, designers, filmmakers and entrepreneurs at work and play.

The best thing to do is head down early evening, just wander around and take it all in. Once you’re done rambling, have a nice sharpener in the Baltic Fleet, erstwhile boozer of sailors and dockers, before heading round to Camp & Furnace. A cluster of abandoned warehouses reborn as art and social space, Camp & Furnace is a rich jumble brimming with quirky features – ask about the retro caravans – that attracts creatives of all stripes. With fantastic food on offer in officially the second coolest restaurant in Britain (The Times said so), a buzzing bar where you can party until 4am at the weekend, and even the chance to sing karaoke with a live band, the whole thing makes for an achingly cool venue and a totally one-off night.

Yes, it’s a cliché, but you really can’t visit the city that produced the most successful band in history without at least giving a nod to the Fab Four, and if you’re staying at HOAX you’re already metres away from the place where it all began. The area’s become a little bit cheesy, but with the right kind of eyes you can picture those streets in the ‘50s, buzzing with the sound of four wild local lads a few years before they went and changed music forever.

From there, take a walk down to the deep wide River Mersey, past the striking Royal Liver Building towards the city’s most iconic feature: The Albert Dock. The whole area has been saved from the perils of deprivation by smart investment and superb long term planning. So now there’s plenty on offer, not least Tate Liverpool, the International Slavery Museum, The Beatles Story and a great selection of bars and restaurants for lunch. 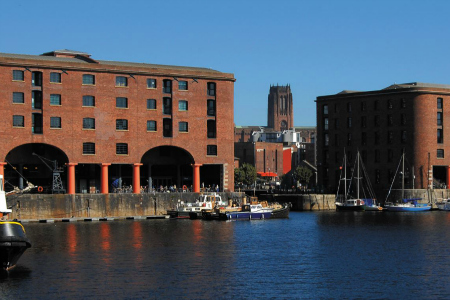 Take a nice stroll back into the city and head straight for Wood Street, a characterful part of town where you’ll find yet another buzzing arty spot. The Foundation for Art and Creative Technology (FACT) is as cutting edge as arts organisations get, especially with the current exhibition, the beautifully curated Science Fiction: New Death, an ominous, trippy statement about a world being overrun by technology. There’s also a Picturehouse cinema in the building if you fancy a nice bit of downtime.

Liverpool is a fashion-mad city, so if you like a bit of shopping you’re in the right place. Giant shopping centre Liverpool One is the city’s third cathedral to a very different religion, and along with some smaller more boutique malls and a wonderful array of indie stores, you can happily spend the afternoon hunting down some new threads for the evening.

It might not be the original, but the Cavern Club is still worth a drink. It’s often packed with tourists though so you might want to get a couple of cocktails down you before you go. Hopskotch, the bar attached to HOAX, does a great selection, as well as a nice mixed menu for dinner, and there’s often live music on in the bar (not just playing Beatles covers).

Even though it’s a recreation – the original was knocked down in 1973 – the Cavern does have a certain charm to it and it’s certainly good to tick it off your list. But there are plenty of better fleshpots in town. If you’re in the mood for a bit of a knees up, Cava Bar – where you can get a tequila shot for a pound – Soho Bar in Concert Square and Alma de Cuba, set in an old church, are all worth the trip. One of the city’s quirkiest and most fun late-night spots, Aloha, is a must, especially if you like your rum cocktails and table tennis.

Wrap your tool: Father of nine banned from procreating

London gets its first naked restaurant