So shattering is the triathlon. Jonny Brownlee collapsed and vomited after the race, having to be taken away in a wheelchair to recover before the medal ceremony.

Alistair and Jonny Brownlee set out on the London 2012 triathlon this morning in a clear bid for gold and silver medals. Their dual mission suffered a setback when Jonny was given a 15-second penalty for mounting his bike too early but there was always going to be a Brownlee on the triathlon podium today.

Alistair had wrapped himself in a British flag before he crossed the finish line as his competitors lagged behind him.

The Brownlee brothers are legends in their field and despite some bluster from opponents no one really expected anyone else to win the triathlon. In fact, so confident were the Brownlees that they had even discussed staging a dead heat to share gold. 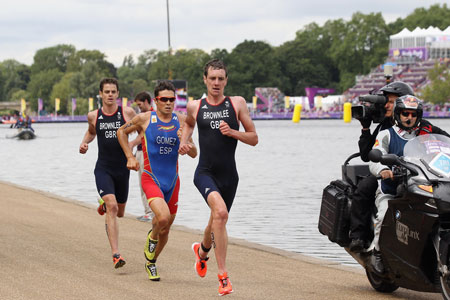 Alistair Brownlee was already the reigning world champion and his most fearsome opponent was believed to be his brother Jonny, who has had a podium finish in his 14 last races.

The third Team GB athlete in the triathlon, Stuart Hayes, was thought to provide a backup for Britain should disaster befall one of the Brownlee brothers.

However the Brownlees were not without adversaries.

Javier Gomez of Spain, Svein Riederer of Switzerland, Richard Murray of South Africa and Alexander Bryukhankov of Russia were always going to be tough opponents.

New Zealand’s Kris Gemmell claimed yesterday that other nations would actively work together to stop the Brownlees taking gold and silver.

The British have played this to an almost checkmate,” Canada’s Simon Whitfield said. “They have a team. They have the two best guys in the world and they have a team racer.

However Alistair seemed unconcerned about the plot to overthrow his family’s podium dominance.

“All we can do in the race is go out and try our best and, to be honest, doing that would be more high risk for them than it is for us. We just have to go out and do what we always do,” he said.

But Australia’s triathlon coach Shaun Stephens yesterday questioned if the Brownlee brothers have the mental composure to win today’s triathlon.

“Alistair in particular hasn’t performed that well here. Two years ago he had a terrible race here. So we will be putting as much pressure on him as possible.

Australian trio Courtney Atkinson, Brad Kahlefeldt and Brendan Sexton were gunning for a podium finish and their coach was confident.

“They have the whole country’s weight on their shoulders. There is pressure there and I don’t know if they are used to that, being such a big race.”