A Highlands road trip: The perfect way to learn about whisky and Scotland’s ‘real’ Braveheart

Our group of daytrippers hail from all around the world  – Australia, Taiwan and Germany – but we have some things in common. We’re sleepy, and not happy about being being outdoors in the cold on a Saturday morning.

As the bus begins to roll, our tour guide and Edinburgh native Don, possibly the most loquacious man I’ve ever met, kicks off with a tale so utterly vile, it makes Trainspotting sound like a bedtime story.

We drive pass the city centre’s Princes Street Gardens, where Nor Loch used to lie, and Don tells us that the loch used to serve as a sewage dump and drinking supply.

It apparently gave off such a foul stink that it earned Edinburgh its nickname, ‘Auld Reekie’. Worse still, he adds, witches were put on trial here. 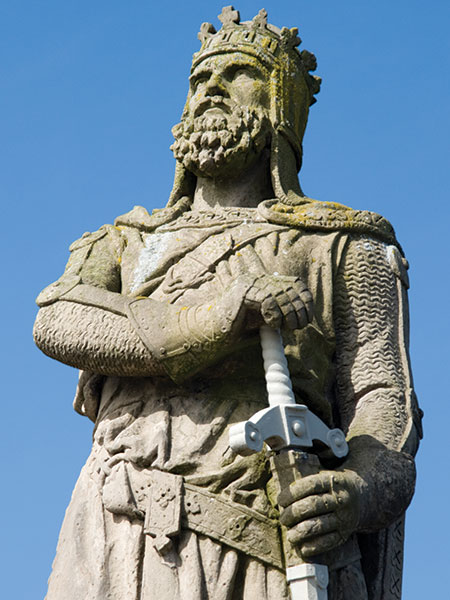 “Their hands were nailed to their knees before they were thrown into the scummy waters,” Don says with obvious relish.

If they survived, they were branded a witch. If they died, well … oops. It’s hard to believe such a grim tale of this gorgeous city, with its Gothic spires and magnificent Georgian townhouses, but one thing is for sure as we all gasp in horror – the cobwebs have been blown away and I’m wide awake and ready for some serious Scottish Highlands action.

Our first stop is in Stirling, Scotland’s capital of yesteryear, where we visit the iconic statue of Robert the Bruce.

The famous patriot played a major part in the medieval Wars of Independence against the English.

In the film Braveheart, Robert the Bruce is portrayed as a traitor of the highest order, but Don tells us – obviously disgusted at the twisted Hollywood version – that in fact there’s no evidence to suggest he betrayed leader William Wallace (played by the roaring, blue-faced Mel Gibson), nor fought on the English side at the Battle of Falkirk.

“Robert the Bruce was in fact Scotland’s true Braveheart!” he tells us. 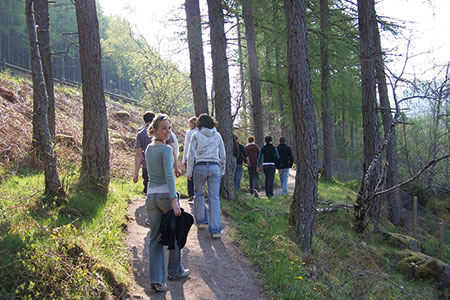 The imposing statue stands in front of Stirling Castle, atop Castle Hill, and as dramatic as all this history is, it’s more than matched by the views from here.

Dark, wet, dense green forests cover hills that stretch out as far as I can see, meeting a smoky grey sky way in the distance – the exact same  timeless scene these Scottish heroes would have seen from here all those years ago.

We pile back on the bus, where Don cranks up the stereo and soon we’re flying through the Highlands to a soundtrack of contemporary Scottish musicians. 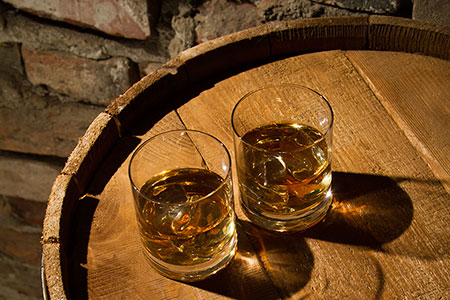 As I listen to the atmospheric strains of the Cocteau Twins, I gaze through the window at countryside that looks as though it belongs on a tin of shortbread tied with a tartan ribbon.

A soft blur of purple trees, the wide, shimmering Loch Lomond, vibrant green patches of moss and mustard-coloured bushes are all so mesmerising, I’m almost disappointed when we finally arrive at The Famous Grouse Experience.It’s the oldest distillery in Scotland and we’re here, naturally, to learn about whisky.

We’re led past the various tubs and barrels where the liquor is produced, before arriving at the most important part: the tasting room.

The distillery has always made Glenturret single malt, but was taken over by Famous Grouse in 2002. We start with Snow Grouse, a tipple aimed at drinkers who aren’t used to whisky.

I’m no connoisseur, but this isn’t for me – the gloopy coconut character just seems a bit wrong.

So I wash it down with a dram of Glenturret and everything falls back into place; with honey and orange peel notes it’s strong and satisfying.

In fact, if pushed, I’d probably even describe it as wild and sexy…

So with fire in our bellies, we start the long drive home, passing the spectacular waterfalls and woodlands of Penrith, before arriving back in Edinburgh around 6pm, just as the city’s warming up for a raucous Saturday night – good job we got a head start with that whisky.

Rihanna snapped smoking a massive blunt while on holiday in Hawaii