A royal summer: The arrival of Prince George, the opening of Buckingham Palace and more London events to get you swept up in royal fever

Celebrating the anniversary of one of the most momentous days in British history, Queen Elizabeth II’s ascension to the throne, a new exhibition at Buckingham Palace, The Queen’s Coronation 1953, goes to great lengths to capture the essence of that day 60 years ago.

“We wanted to make the exhibition about the royal family in the setting of Buckingham Palace, which was the focal point for the coronation,” explains curator Caroline de Guitaut.

The major exhibition of this year’s Summer Opening at Buckingham Palace, where you get to snoop around the royal abode, brings together dresses, uniforms and robes, works of art and more used in the coronation. And with the country still gaga for the brand-new Prince George of Cambridge, there couldn’t be a better time to celebrate all things Windsor.

When TNT visited we were struck, aptly, by the majesty of the palace. Walking through the Grand Hall and up the Grand Staircase, it’s a gold-plated tour through the British monarchy, with paintings of royals past lining the walls. 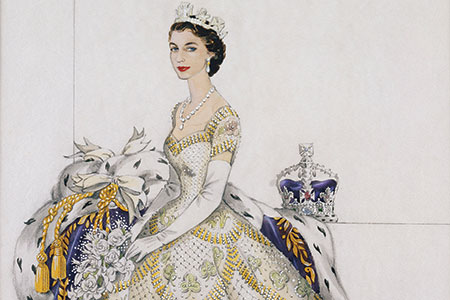 An introductory room with footage from the day itself, alongside replicas of Fifties TV sets, introduces you to the day the second-longest reigning British monarch took the throne.

Elizabeth II’s coronation was unlike any other to have preceded it in many ways, not least due to the fact it was the first to be broadcast live on TV.

“[The Queen] wanted the Coronation to be a celebration of tradition but also to encompass modernity,” de Guitaut explains.

The centrepiece is the Coronation dress. Designed by couturier Norman Hartnell, it is “full skirted, has a nipped-in waist, encrusted embroidery, and encompasses the national emblem of the UK, as well as the Commonwealth countries of which she was now head of state,” de Guitaut says.

Hartnell submitted many designs, and it was only after alterations to the eighth requested by Queen Elizabeth, that the 5.3m-long dress was finalised. 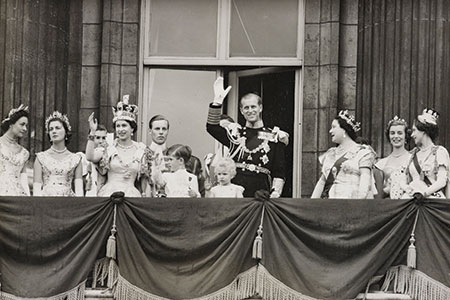 A walk through a recreation of the Queen’s Coronation State Banquet illustrates how the occasion was marked behind closed doors, and the adjoining Green Drawing Room is especially revelatory about the day.

“This is where [photographer] Cecil Beaton took the official portraits [of the royal family],” de Guitaut says. “They would go on to be the most enduring images of her reign.”

One of the most revealing aspects of this room though is not the photos, or the ornate presentation of the silk-lined walls, but private footage shot on the day for the royals – a family video on a most grand scale – which shows a four-year-old Prince Charles messing around only to be brought into line by an orderly touch on the shoulder from not a minder, but the Queen herself.

Stocking up on Prince George mugs and keen for more of royal London? Check out our top picks over the page, from crown jewels to Tudor cookery and a royal afternoon tea. 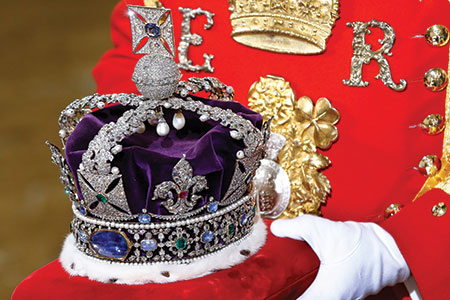 The Crown Jewels – Tower of London

The Crown Jewels are a glittering symbol of the British monarchy and an essential part of a visit to the Tower of London, a fascinating trip through royal history in itself. The Imperial State Crown (above), the Coronation Spoon and the Sovereign’s Sceptre with Cross are on display  under armed guard. The British monarchy is the only one in Europe to still use their Crown Jewels in their coronations and they’ve done so since 1066 in Westminster Abbey. 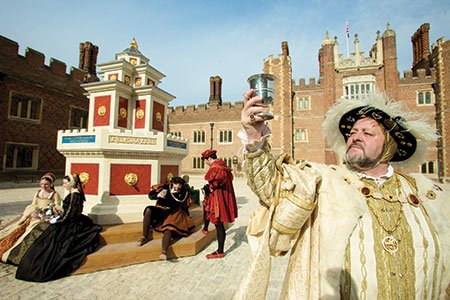 Henry VIII is known for various things – being a fat rotund monarch who went through wives like nobody’s business for one. Before he’d gorged himself into a giant, he was a dashing young man (he had to do something right to get all those lady-wife trophies) who wrote music and poetry and was ace at pretty much any sport he turned his hand to.

It is this period of Henry’s life that this exhibition looks at with paintings and interactive displays. Once you’ve learned up on the ‘pin-up prince’, you can stroll through 60 acres of gardens and take a wander through the famous maze.

Visit this small cottage in Kew Gardens which was once the informal retreat for the royal family, who would hold picnics and take long walks in the surrounding grounds here.

This Whitehall-located abode (right) was primarily for entertaining and its basement space a drinking den for James I. The character-filled spot is rented out as a unique party venue to this day.

This sweeping memorial – built using Cornish granite – was built in 2004 and opened by the Queen to honour the late Princess of Wales, who was killed in a car crash in 1997 in Paris. 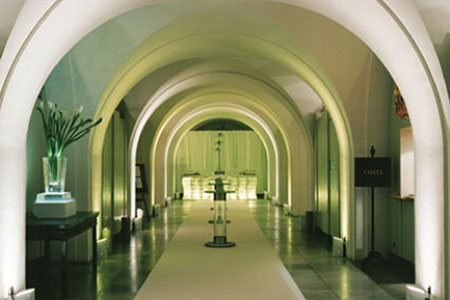 The Royal Mews is responsible for providing transportation for the Queen and royal family, whether this be automobile or horse-drawn carriage. Seven daily – and free! – tours take you behind the scenes to see how the Mews  aids Her Madge in carrying out her formal duties.

These walking tours take you to Cutty Sark, the Old Royal Naval College, the Greenwich Royal Observatory and National Maritime Museum. They’re private tours of no more than six to a group so you get plenty of attention.

Located in the heart of Horse Guards Parade, this museum looks behind the scenes at the work of the Household Cavalry Regiment. 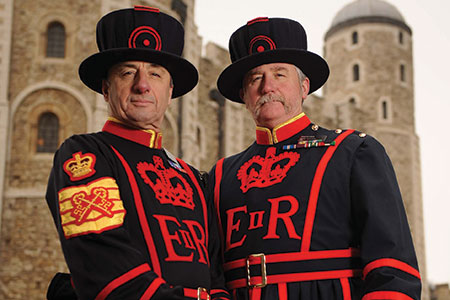 The kitchens of Hampton Court Palace are famed for their food – they were responsible for the bulging waistline of famous resident Henry VIII. They continued to feed Stuart and Georgian monarchs for 200 years after big Henry, and recently have been host to food archaeologists who’ve been experimenting with traditional recipes, food and cooking methods in these live cooking demonstrations.

This new exhibition at the palace, which has enjoyed a £12million rejuvenation recently, brings together dresses from the Queen in the Fifties, Prince Margaret in the Sixties and Seventies and future king Will’s mum Diana in the Eighties.

With 21 individual dresses spread across five rooms, the collection shows how fashions have changed over time – from the nipped-in waists of the Fifties, to the short skirts of the Sixties and Seventies and the shoulder pads of the Eighties – and how each of the three royal ladies’ style has shaped generations of women around the world.

The Yeoman Warders, or Beefeaters as they are nicknamed, are one of the most iconic symbols of London and Britain. A minimum 22 years Armed Service is required to become one of the famous royal bodyguards, who lead tours round the Tower of London regaling you with tales from its eventful and grizzly past. 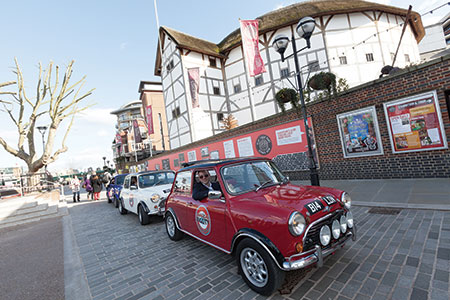 Take a tour round the royal sights of London in style in a classic Mini Cooper. These up close and personal tours pick you up outside St James’s Park Tube station and whiz round the central London royal landmarks such as Buckingham Palace, Horse Guards Parade and Whitehall, before ending up outside Big Ben, Westminster and 10 Downing Street. These mini adventures last half-an-hour.

This five-star hotel opposite Kensington Palace, former home to Princess Diana, won The Tea Guild Special Award of Excellence this year and last, making it the perfect place for British afternoon tea.

This 17th century building was the home of Charles I’s queen, it is now an art gallery and is regularly hired out for private events by the wealthy who want to enjoy its glamorous setting. 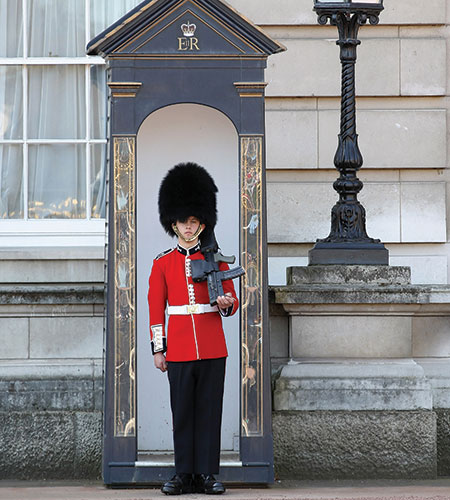 With many of her own journals as inspiration, this exhibition explores Queen Victoria’s personal life and her public, official life. Victoria was crowned queen in 1837 at the age of 18 and reigned for 63 years, longer than any other British monarch and the longest for a female monarch anywhere in the world. This exhibition has many of her personal belongings on display in the room in which she would have once lived.

Explore the private rooms where Mary II would have relaxed and walked through to reach her secluded garden retreat.

The Royal Kitchens at this west London residence have been untouched since Queen Charlotte’s death in 1818, so they give a revealing look at what Georgian life might have been like at the time. You can explore and learn who would have worked here, what their work would have been like, and just what exactly went into producing a 19th-century dinner or banquet. A visit to Kew Gardens includes entry to the palace, too.

All or nothing: Julia Gillard has called for a ballot to decide the leadership of the Labor party once and for all