A total eclipse of the sun will pass across the far north coast of Australia in November. Lying right in the Shadow Path (a great name for a punk band) will be the beautiful resort town of Cairns in far north Queensland where the nearby Lunar Eclipse festival will be held. A solar eclipse is considered to be one of the rarest and most awe inspiring of sights and the far north of Australia is being blessed with the spectacle this November.﻿

Forget for a minute the fact that some of Australia and the worlds biggest and best roots, blues and experimental bands will all be playing over seven days (which is reason enough to go) but just think how awesome an idea this really is; a festival to celebrate a solar eclipse. It’s practically the closest thing you’re going to get (other than maybe Burning Man) to an age old, pagan worship experience.

In this day and age of science and knowledge there’s something strangely appealing about the idea of celebrating a solar event like our ancestor’s would have thousands of years ago. Chances are though that stone age Druids didn’t celebrate the winter solstice rocking out at Stonehenge to the chilled grooves of indomitable Kiwi outfit Fat Freddy’s Drop and about 100 other acts from all over the world. 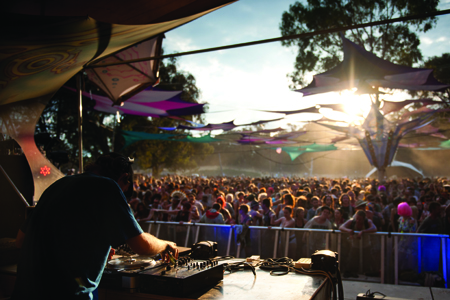 A special, purpose built village area has also been constructed specifically for the festival and offers experiences unique in terms of festivals anywhere else in Australia. The village will feature yoga and dance workshops, a healing and massage sanctuary and any number of areas to chill out and commune with the cosmic forces of the great beyond and ponder the ceaseless majesty and unfathomable vastness of space. Ponder your own role in the story of the universe however large or small it may seem… Or, if introspection isn’t your thing you could always just talk to your mates in the shade.

A whole host of weird and wonderful performance art installations and pieces will also be featured around the festival grounds. Local, interstate and international artistic talent will be on show throughout the seven day festival, with works chosen to challenge and inspire in equal measure. Opening the eyes as well as Blake’s metaphorical “doors of perception” to the possibilities of what unburdened creativity and talent can achieve when working in perfect unison. Cooky cabarets and mesmerizing fire dancers are definitely not to be missed on the Luminosity Stage.

The Eclipse festival has been in the works now for several years and has brought together the organisational talents of people from Australia, the UK and the United States of America.

Early on the morning of the 14th of the festival will rise together as one to watch the sun disappear behind the moon and cloak the world in darkness. What an experience.

For tickets to the Eclipse 2012 Festival at Palmer River Roadhouse, see: eclipse2012.com. Tickets from $250