Land of legends: getting a culture fix in Rotorua

Travelling turns you on to new experiences. Meeting new people, seeing new sights, eating new food. The whole point of leaving home and setting off to some exotic, far-flung destination is the shock of the new. But after a while, like the spoilt little now-generation folk we are, we get a bit blasé. One tropical beach looks like another. A golden sunset reflected on the softly lapping ocean? Yawn. A stomach-relocating, bank-account-draining adrenalin rush? Ho hum.

So I am pleased to tell you, fellow “attention span of a goldfish” traveller, that I have been somewhere that is absolutely nothing like anywhere else. Somewhere so unique, so unusual, so downright weird, that I sincerely doubt I will find another spot on the globe quite like it.

It’s Rotorua. Slap-bang in the centre of NZ’s North Island. If you lived in Rotorua, you might come home from work one day to discover that a small crater of steaming ooze had appeared in your driveway. And that it was trying to eat your car. If you lived in Rotorua you might have to get the repairman around every couple of months to de-corrode your TV and video. You see, the air carries gas that’s trying to eat your telly, too. It’s all very exciting. 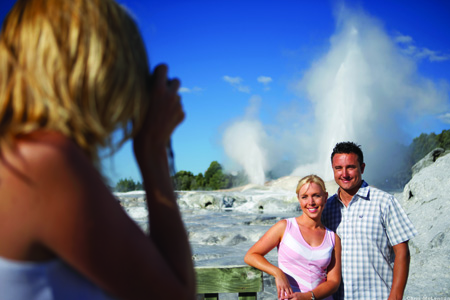 But you don’t live in Rotorua. You’re like me – just visiting. Do yourself a favour and stay a while. The smell fades, the chances of being swamped by a spontaneous geyser eruption are slim and there’s lots to do in this decidedly odd town. You can explore all the exciting volcanic strangeness at the Whakarewarewa Reserve (known as “Whaka”, thankfully) or tours of the nearby geothermal areas, but you can also test your nerve with a range of adrenalin activities, plus it’s the place in NZ to experience some Maori culture up-close. Rotorua is also something of a party town. But remember kids, that sulphury smell in the air doesn’t sit well with a hangover…

Maori legends and oral history are alive and well in New Zealand, and Rotorua is one of the best places to learn about them. According to Maori legend, Rotorua was first explored by Ihenga – although he believed he wasn’t the first to get there, mistaking the steaming geysers as signs of fire from other settlers. To learn more about the history of the area, I met up with Sonny – a descendent of the Te Arawa tribe that first settled in Rotorua – who runs a local legends tour.

Everything is covered on the trip, from visiting a marae – or meeting house – and learning the proper greetings and protocol for entering, to finding out the Hongi greeting – two touches on a person’s nose – signifies the sharing of the breath of life.

On my tour, we had enough time between Sonny’s tales to take in the Lady Knox geyser, Wai-O-Tapu thermal park and the beautiful twin lakes of Tiki-tapu and Roto-kakahi (Green and Blue lake). Taking a breather for a coffee, Sonny told me the story of the silver fern and why it became a national symbol – Maori explorers would turn it upside down in the moonlight, and the silver reflection on the leaves would point the way home. If nothing else, you’ll leave knowing more about the Maori people. 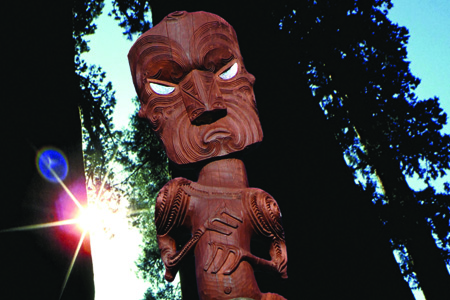 That evening I headed to Tamaki Maori Village, where we were told we would see many aspects of the Maori experience, from traditional games and songs in the recreated village to the Whaikorero, or welcome speeches, in the Wharenui. Before entering the village, however, we had to nominate the chief of our bus. Liking the idea of being in charge, I put my hand up, only to find out my duties included having to stand in front of 300 people while a Maori warrior issued a challenge to me. I was told although he would look angry, it was a peaceful challenge, and even if his actions looked humourous, I was to remain straight-faced.

Not smiling didn’t prove a problem. If you could imagine a Maori warrior descending out of the mist to the wailing of his fellow warriors, twirling his fighting stick at great speed, the last thing I was going to do was laugh at him.

Earlier Sonny had spoken of the Maori as one of the kindest and most giving races in the world, but also to be careful if you ever crossed them, as their warrior instincts were never too far away. And it was in the Wharenui that I realised what he meant. One minute the men were softly pressing noses with the visitors, the next they were issuing war cries at the top of their voices.

The only thing left was to eat and be merry with a traditional hangi, where the food is cooked under the earth for three to four hours. Chicken, lamb, sweet potato and salmon were just a few of the gastronomic delights available – eating well comes second only to singing for this lot.

A final touching of the nose and I was on my way back to the hostel, enriched with my new-found knowledge of a fascinating, welcoming and proud race. Whether you choose to believe the legends or not, you’ll leave New Zealand feeling better for meeting the people who tell them.

TNT at the movies: Godzilla

Sex advice with a health warning!

Has Kylie turned to Kabbalah?