Action in the Algarve: Surfing, biking and kayaking

Never say ‘Albufeira’ to an Algarve local. Every native of Portugal’s southernmost region to who I’ve blurted the name of the area’s most touristed city has responded with a grimace, or an unimpressed lip curl at best. They seem genuinely mystified by the millions of tourists that flock to the Algarve just to crash out on the sand, and even more so at the numbers choosing to set up in the whitewashed apartments of Albufeira, jammed together in much the same suffocating proximity as the pink bodies jostling on the city’s beaches.

“There is so much more to do here,” is what I hear from the driver who picks me up at the airport, the surfer chick who shows me how to catch a wave, the guides who take me hiking in the Algarve’s mountains – to name but a few. Over a handful of days in the region, I’m struck again and again by this bewilderment at out-of-towners’ failure to discover more than sunbathing.

The first local to show me a more active time in the Algarve is Martha. With her bleached-blonde locks, battered van and Billabong sweatshirt, it’s not hard to guess her line of work. During our short drive towards Cordama beach in Sagres, on the Vicentina coast, she chatters animatedly about a recent feature on surfline.com. “It named Portugal the best place to surf in the whole world in February,” she says. “I was so excited, I forwarded it to all my friends.”

Perhaps the best part of surfing in Sagres is that swells are most impressive throughout the off-peak tourist season. Strong winds during summer make better conditions for kite surfing, while winter swells at the west coast’s hollow beach breaks draw serious barrel-hunters and few other punters. It’s an epic destination for you and your board – miles of deserted golden sand hemmed on one side by jagged, looming cliffs, and the Atlantic Ocean’s endless royal blue on the other.

There’s also a range of beaches suited to beginners – which is good news for me. Wetsuited up and falling clumsily from my foamie in no time, I can see why this is the perfect place to take your first tentative wipe-outs. “We get lots of Aussies coming to us to learn,” Martha tells me. “Maybe they were embarrassed about being a beginner back home.” In Sagres in winter, there are no crowds to witness your shaky start.

One word of warning – growing renown here has led to plenty of shonky surf operators setting up with nothing in the way of certification or insurance. Martha co-owns the surf centre at Memmo Baleeira hotel in Sagres, which belongs to the Algarve Surf Association. She recommends you only get involved with ASA-approved outfits. 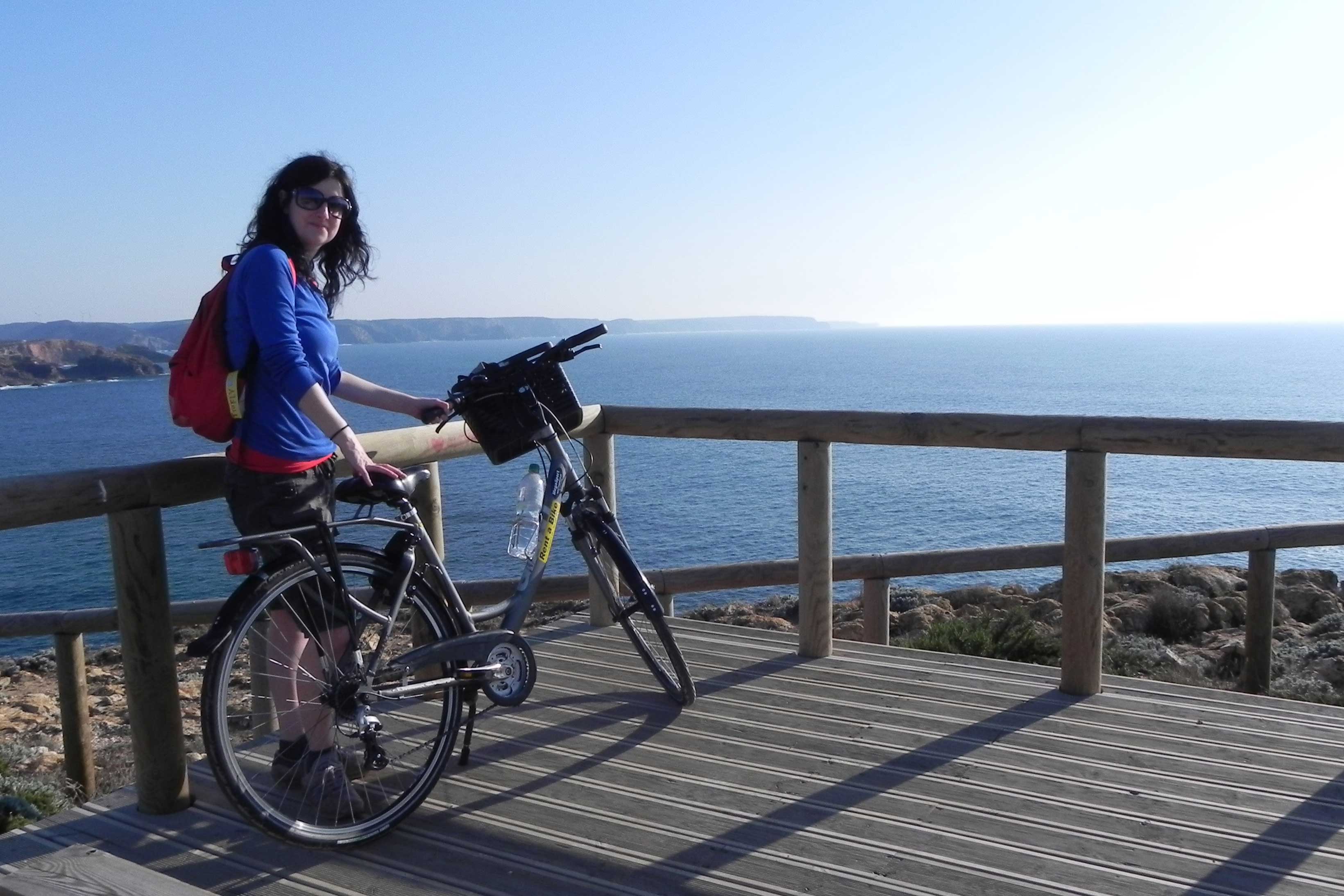 Aside from surfing, there’s a wealth of ways to be adventurous with a sea view. The Ecovia biking trail traces the Algarve’s coast from end-to-end, covering 214km from Cape St Vincent in the west to Via Real de Santo Antonio in the east. As I pedal the 27km from small town Tavira to Via Real, I find myself entertaining wild fantasies of some day riding the whole route. There’s an overwhelming sense of satisfaction that comes with being perched on my saddle, passing peaceful orange groves and the companionable big blue, while, overhead, the sky remains unsullied by clouds. I breathe it all in and smile at the idea that there’s never a beach far away if I fancy a rest.

Another day, I take a kayak out into the Ria Formosa. This protected natural park comprises a landscape of coastal lagoons, impossibly blue beneath the ceaseless Algarve sun. Out here, I get a sense of how the region must have been before package holidays bundled into town. Weather-beaten old guys pick oysters from traps as seabirds circle in the still air, and I spot a grizzled fisherman asleep at the wheel of his boat as it motors past. After about an hour’s paddling, I arrive at an empty beach that stretches further into the distance than I can see.

The region’s former life as an assemblage of sleepy fishing villages is most keenly felt around the Ria Formosa, where there’s a palpable pride in that past. See, for example, the ‘anchor graveyard’ on Ilha de Tavira, arranged in honour of the tuna fishing fleet that was based here.

Curious to find more of an Algarve untouched by time, I head inland to explore the Via Algarviana. The 301km hiking route undulates along the region’s verdant hills and valleys, passing through various rural villages. I take on a 20km section of the trail, where my guides, Ana and Cristina, stop to chat with the elderly folk who congregate in the shade of village trees. 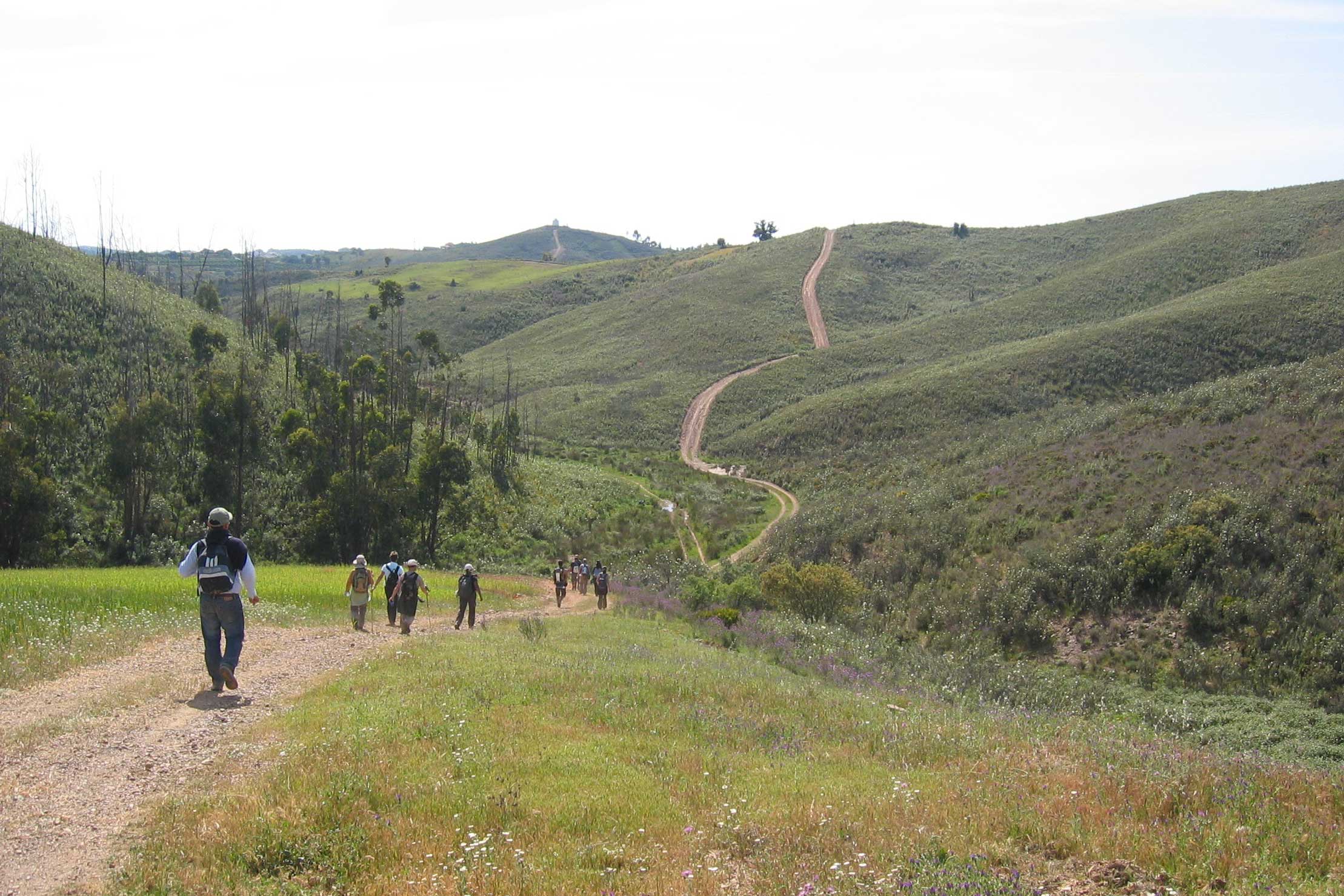 “They don’t see many people, so when we pass through they always like to talk,” explains Ana. “When they die, it will all be ruins,” adds Cristina, looking about her at the small collection of houses and crumbling stone walls. That’s the fate of country life in so many corners of the world nowadays – the young move to the cities, and the village dies with the generation that stays.

I look from the local hand-weaving a basket in the shade of his front doorway to the wild green mountains beyond. The Algarve receives seven million foreign tourists a year; how cool that even in the most well-trodden places, there’s still so much to discover.

More on the Algarve at visitalgarve.pt
More on the hiking route at viaalgarviana.org 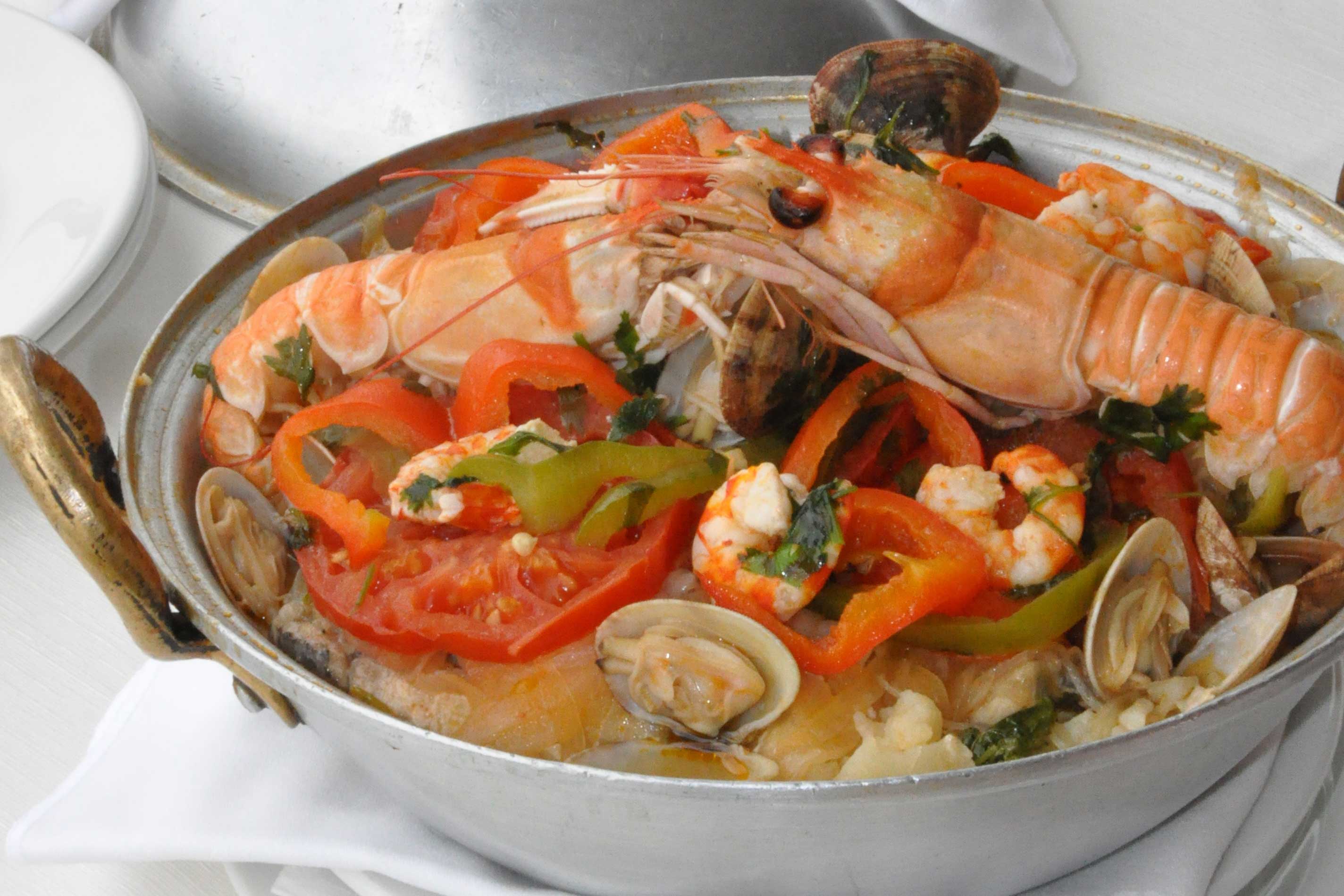 BUDGET: Right outside the car park of Memmo Baleeira in Sagres, there’s a strip of small restaurants dishing up great budget dinners. Take a peek at the menus and see what tickles your fancy. There are burgers from £2.50 and cataplanas – the famous Portuguese seafood stew – from £15 to serve two.

MIDRANGE: The colourful A Eira do Mel may be Michelin-listed, but it’s a relaxed, friendly eatery in which to enjoy a sublime lamb stew or octopus cataplana after a day surfing Sagres’ waves. Mains from £12. (eiradomel.com)

LUXURY: If you’re looking for something really special, try Henrique Leis in Vale Formoso, Almancil. Expect the likes of duck foie gras with quail breast and truffle. You’ll be laying down about £50 per head, without wine. (henriqueleis.com) 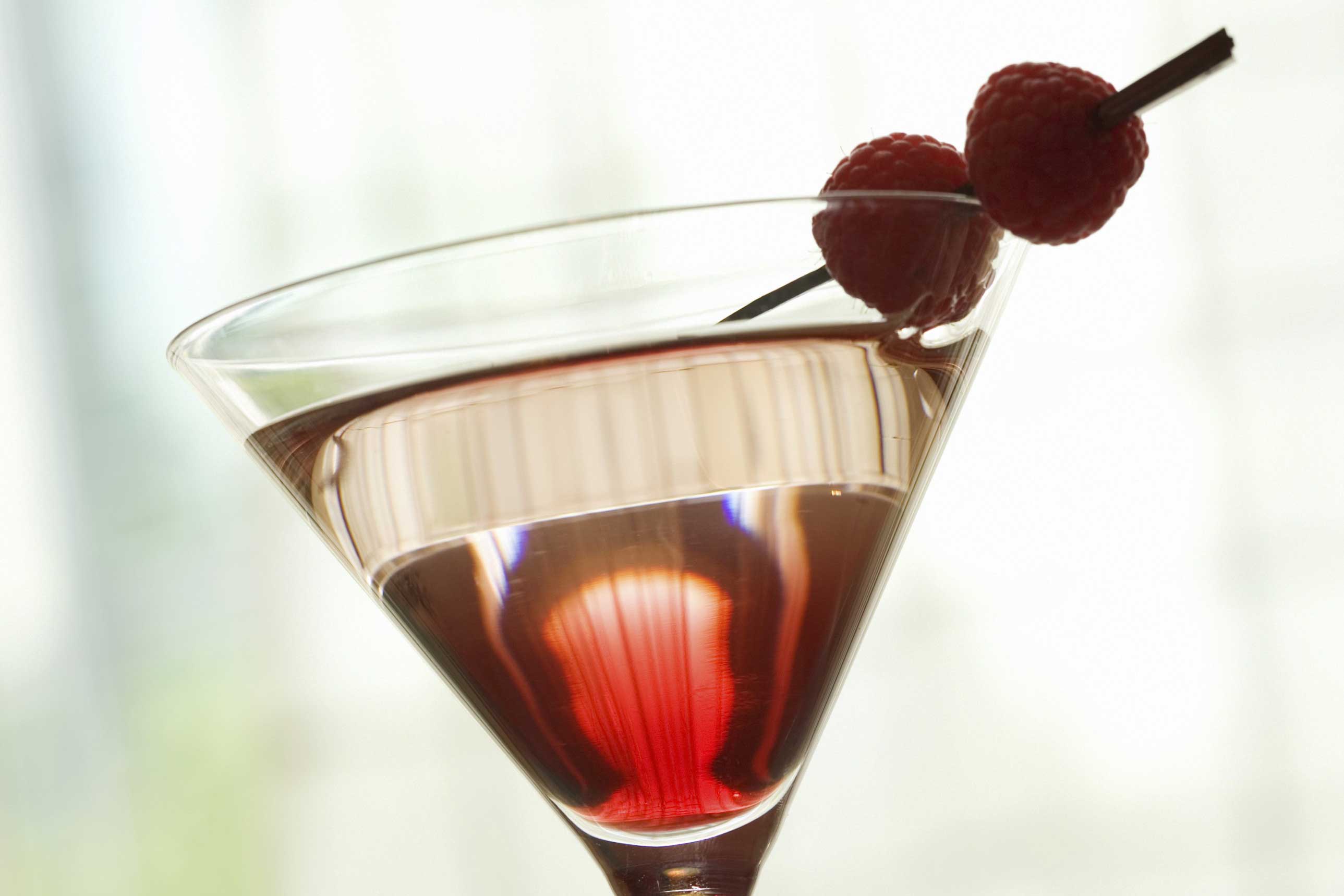 BUDGET: Warung in Sagres has cosy couches and cushions, DJs and live music, plus surfer-buddies-in-waiting aplenty. Beers from about £1.70 and spirits from about £2.50. (warung.eu)

MIDRANGE: Converted from an old farmhouse,  Piano Bar Dom Paio is a sophisticated spot in the Pedras d’el Rei resort. The bar serves up surprisingly smooth local firewater and there’s live jazz in summer. Set in Santa Luzia, the restaurant also cooks up a great octopus with sweet potato. Firewater from £2.50. (pedrasdelrei.com) 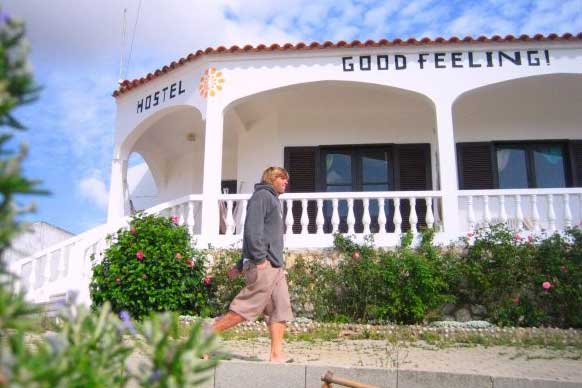 BUDGET: About 10km from Sagres,  Goodfeeling hostel is surrounded by gorgeous rolling hills and great beaches. Dorms from £13pn. (hostelworld.com)

MIDRANGE: For a rustic stay, check out Casa do Lavrador in the tiny hillside village of Furnazinhas. The two-storey rooms are huge and homely, complete with country-chic log fire and stone walls. Owner Judith speaks great English and serves up an amazing breakfast of homemade cheeses and jams. From £26pn, B&B. (casadolavrador@sapo.pt)

LUXURY: The Memmo Baleeira is an impressive all-white masterclass in modern design, with arresting sea views of Sagres and an in-house surf school. Special offers from £54pn; standard rates from £87pn. (memmobaleeira.com)

GETTING THERE: Fly direct from London Gatwick or London Luton to Faro from £36.99 one-way with Monarch, including taxes. (monarch.co.uk).

The Best Holiday Locations In 2017

TNT’s Australia roadtrip guide: Everything you need to know