All finance, no fun? Take another look at Zurich…

Despite its reputation for business, banking and suits, the Swiss city has plenty of surprises for non-corporate visitors, from hosting Europe’s largest techno street party to rock and roll-themed hotels.

In 1992, Zurich’s first Street Parade was organised by one of the city’s students and was a demonstration for love, peace, liberty, generosity and tolerance. It’s still going over twenty years later and the party now attracts up to one million people each August. The next parade’s on August 2.

Beginning at the city’s lake, the River Limmat starts its journey to the sea from the centre of Zurich. Locals and visitors stroll along the length of the river to take in the riverside cafes, shops and the Muenster Bridge, a perfect place for a photo opportunity.

Of all of Zurich’s museums (including the Swiss National Museum, Rietberg Museum and the Museum of Design), the Kunthaus art gallery is a particular highlight, housing one of the most important art collections in Europe. The collection includes works from Edvard Munch (the guy who painted The Scream) and Cubist works from Jacques Lipchitz.

In addition to its architectural and historic attractions, Zurich’s Old Town has the highest concentration of nightclubs in Switzerland. Lindenhof Square is located on a small hill in the centre of the Old Town and offers decent views over the city, perfect if you need somewhere to regroup and take a breather.

Another spot to rest and take a break from tourist duties, Zuerichhorn Park is just one of the many green areas in and around Zurich. However, this park stands out due to its Chinese Gardens, complete with fish ponds, stepping stones, lanterns, maple and bamboo trees and elegant pavilions. 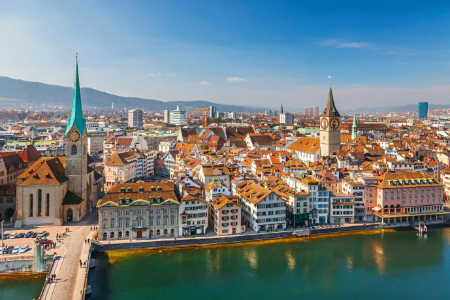 Zurich’s Grossmunster Church is a familiar and iconic feature on the city’s landscape, as the Romanesque-style Protestant church is easily recognisable due to its twin towers. The intricate exterior design is impressive – look out for gargoyles and saints sculpted on the top of the columns.

Of course, with so many finance workers with deep pockets visiting the city, Zurich would be missing a trick without a glamorous shopping quarter. Lovers of labels will revel in a walk down Bahnhofstrasse, one of the most exclusive and expensive shopping streets in Europe. 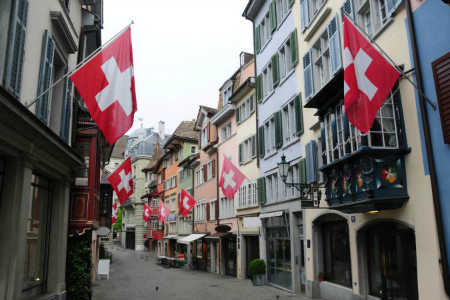 According to Trip Advisor, the Widder Hotel is the best hotel in Zurich. Sitting in the Augustiner quarter (very close to the swanky shops on Bahnhofstrasse), the hotel is made up of nine historic town houses, with rooms and suites designed around their unique period features. The hotel has some quirks too, including a Butcher Museum within the banqueting room which permanently displays butchers’ handiwork from the past century.

Another top rated hotel in Zurich, the Dolder Grand has a choice of superior and deluxe double rooms, but the real magic lies in the four exclusive and differently-themed suites of the hotel. Suite 100 is a rock and roll paradise, with the design inspired by the Rolling Stones. It encapsulates the sixties decade perfectly, with pink and black décor and a private whirlpool and sauna.

How to get there: Flights to Zurich from London City Airport take ninety minutes. Make the most of 24 hours in Zurich with this one-day itinerary guide.

Woman tricked into being getaway driver on Facebook date

Chapman trains, but no word on fitness