After losing the past two Big Bash finals, the Scorchers finally tasted victory.

Australia and Hobart Hurricane skipper Bailey was on fire as his side tried but ultimately failed to chase down the Scorchers total of 191 after 20 overs. 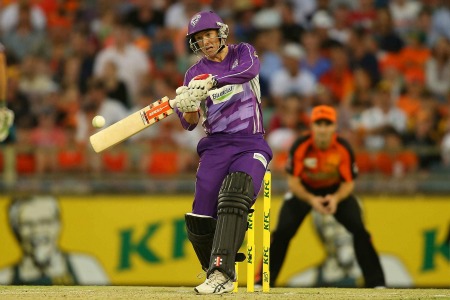 After winning the toss and batting, Simon Katich’s side played a controlled innings, compiling the competitive target with just four wickets down.

An excellent 63 from 43 ball from Shaun Marsh formed its foundation after Craig Simmons set the tempo with 45 from 36.

Adam Voges (27 from 17) and Shaun’s not so little brother Mitchell Marsh (a remarkable 37 from 12) showed what can be done with free arms on a flat WACA deck.

In reply the Scorchers bowled with miserly intent, with 43-year-old Brad Hogg again the superstar getting through his four overs with two wickets and conceding just 17 runs.

Tight bowling built the pressure and forced the Hurricanes batsmen into errors despite promise from Ben Dunk (17 from 14) at the top of the innings and Johnathan Wells (24 from 23) who was stumped after being tied down by Hoggs left-arm wrist spin. 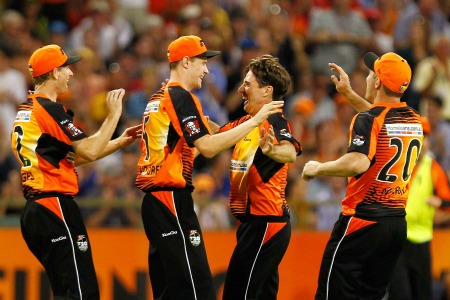 When Bailey arrived however anything was possible – he dispatched the Scorchers attack to all parts of the ground with his typical mix of invention and poise. His 58 came off just 32 balls, but with the run rate creeping over 13 an over, Cummins – who’d copped some stick to go for 47 off his four – produced a clever slower ball and Alfonso Thomas took the catch.

Although they finished the innings with a boundary to reach 7-152, from then it was a formality for the Hurricanes, who’s final may have already been played when they knocked the Melbourne Stars out of the tournament in the semis.

As consolation they’ll go through to the next ICC T20 Champions League tournament.

My song will go on: Daniel Merriweather furious with Celine Dion for stealing his track