In another picture for American Apparel’s new campaign, a girl climbs a tree in an oversized shirt with no underwear.

Another ad depicts a young model in a see-through lacy bodysuit with no knickers or trousers on. Go on, have a look… 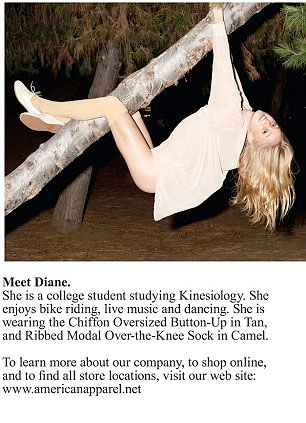 AntiSocialite wrote: “These American Apparel ads are getting out of hand.”

GunoffLabel posted: ‘When does it come to a point when it’s boring and contrived? #dislike #American #Apparel #ads …. ooOOoo something else controversial.’

American Apparel is known for its raunchy advertising campaigns, but they have been slammed in the past for using highly sexualised images.

In 2009, an American Apparel campaign featuring a model in a hoody was banned by the Advertising Standards Authority because it “could be seen to sexualise a model who appeared to be a child”.