Amsterdam by bike: guide to cycling and sightseeing

Amsterdam is made to explore by bike – its narrow streets and countless bridges make hopping onto two wheels the best way to get around. Often hailed the most bike-friendly place in the world, the city is gloriously flat with 400km of dedicated cycle paths. You can hire a bike for about €7 a day.

Stuff to see on your bike in Amsterdam

Bikes festooned with garlands of flowers, leopard print, and coloured paint, glamrock-style sparkling seat covers and luminous yellow plastic balls that move up and down the wheel spokes, not to mention a bunch of bizarrely-shaped bikes. Unicycles, tandems, lowriders and family-sized models that can carry three kids and a small pooch help to make up the city’s 550,000 bicycles.

Cycling over bridges and alongside canals, check out the plush barges and houseboats, many of which are so in demand that they cost more than a flat.

City officials have been trying to gentrify Amsterdam’s notorious Red Light District in recent years, but prostitutes can still be seen, dancing in their underwear behind floor-to-ceiling windows.

Fancying a shopping spree, I park my bike at the Nine Streets, an area flanked by Raadhuisstraat and Leidsegracht, where I discover pavement cafés, vintage shops and high-end boutiques.

The site of John and Yoko’s bed-in

Getting out of the city centre and heading for Amsterdam’s southern suburbs, I pass million-euro mansions and the Amsterdam Hilton, where John Lennon and Yoko Ono held Bed-In for Peace in 1969 during the Vietnam War.

Feeling in need of a cultural fix, I head to the Van Gogh Museum, home to the largest collection of the artist’s work in the world.

On Friday nights, the museum is open until 10pm and its central hall is transformed into a hip nightspot with a mix of live music, DJs and wine tasting. 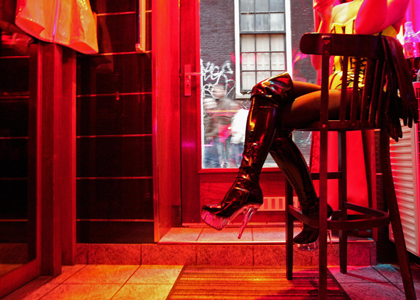 Dope tourists will find more than their bong-fill of fun at Amsterdam’s coffee shops. Top draws include Coffeeshop Sanementereng, chock full of knick-knacks and held up by tree trunks, the legendary Greenhouse where celebrities are frequently spotted, and De Dampkring, where part of Ocean’s Twelve was filmed.

For a provocative dinner with a difference, pay a visit to Supperclub. With its stark white decor, diners are served bizarrely-presented food (we ate our starters with rubber-glove clad hands) while lying on comfy beds, as scantily-dressed waiting staff (think women togged up in stockings and suspender belts while wearing pig masks) perform weird, wonderful and often sexy acts that change weekly. See supperclub.com

WHEN TO GO: Any time, but bear in mind that the summer months are hot and humid, while January and February are cold.
GETTING THERE: EasyJet (easyjet.com) flies from London Stansted to Amsterdam. Trains depart from St Pancras International (eurostar.com) or catch a coach from Victoria (eurolines.com).
GETTING AROUND: See the city by bike, on foot or by boat.
VISAS: Australians and New Zealanders don’t need a visa. South Africans require a Schengen visa.
CURRENCY: Euro. 1 GBP = 1.2 EUR.
LANGUAGE: Dutch, but everyone speaks English.
GOING OUT: A pint of beer is EUR 5.
ACCOMMODATION: Dorms cost from £17 and private rooms from £45.
GET MORE INOF AT: holland.com

Now read this:  Five things to do in Amsterdam