As dawn breaks at North Beach on the Gallipoli Peninsula, it’s not the wind whistling across the water that’s the most chilling sensation around. Nor is it the damp grass where we’ve lain all night.

It’s the refrain of The Last Post that sends tingles up the spines of the 10,000 sombre Antipodeans huddled at the foot of the hill known as the Sphinx.

The sound of the lone bugle paints the eerie silence as the sun peeks over the horizon, promising, but not yet delivering, warmth. That will have to be found elsewhere … most likely in our hearts and minds as we remember the young men who checked out of this world, guns in sweaty hands, fear thumping in tight chests, final words squeezed through parched lips, on the beaches of Galipolli.

We stand for our fallen brothers. 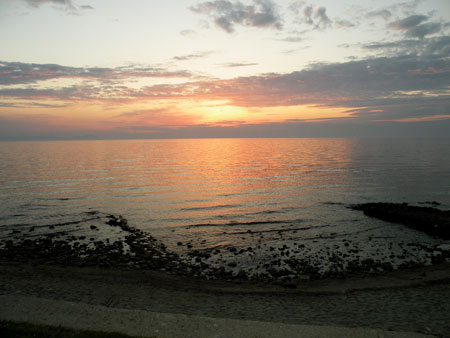 The day before, Gallipoli is a lively place while daylight is still in action. The inlet glows golden, heated by our brightest star’s afternoon caress. It’s a slice of heaven that at first glance reveals not a trace of its murderous past. However, a walk to the beach reveals rows of young men’s graves lined along a peaceful grass verge. As the ocean laps gently at the nearby shore we sit contemplatively among the last resting places of these warriors but now it seems the sun cannot thaw the unearthly chill.

The dawn service at Anzac Cove

Anzac Day – all you need to know

Back at the main site, the hordes drape their flags on every available space. There’s none of the usual raucous banter normally accompanying a band of travelling folk from Down Under. Even the most energetic party animals recognise contemplation and respect are the order of the day – the complete ban on alcohol helps somewhat.

As night unfurls its dark blanket across the bay,  temperatures plummet but it’s only the foolish and ignorant who dare complain. ‘Harden up’ is the sharp response delivered to those who do.

We’re here for the thousands of young men, tempted into the armed forces with promises of ‘seeing the world’ who sacrificed their lives in a battle they could not win. Lambs to the slaughter, destined to die on a foreign hillside, hearing the futile moans of their friends punctuated by the dull thuds of metal meeting flesh.

We’re here – fully equipped with sleeping bags, thermals, a steady supply of commemorative ‘entertainment’ and enough hot food to feed an army – for one night only. We will leave Anzac Cove. Some were not so fortunate.

Tonight we remember them all.

As darkness chokes the last living daylight, the big screen flickers, then glows with tributes to our fallen compatriots. The fresh faces of the young men slaughtered where we sit draw gasps from the assembled. It’s the face of one James Martin, the youngest soldier to have his journey extinguished, that causes the biggest jolt. The Australian was 14 when he contracted typhoid in the trenches and died soon after. Martin had lied to a recruitment officer, saying he was 18.

“I can’t even imagine going to war now, and I’m 32, let alone 14,” an Aussie voice says. Murmurs of agreement echo from the freezing hillside.

A band plays into the night – its renditions of First World War songs breath life into the images presented to us. Documentaries softly relate the stories of those who survived and their offspring; we’re reminded war affects generations, robbing families of their leaders, their mates, their lovers.

As the sun rises, the last notes of Reveille evaporate into the ether and the final prayer is delivered before we sing all three – Turkish, New Zealand and Australia – national anthems.Soon after, the migration to either Lone Pine (for Australians) and Chunuk Bair (for New Zealanders) begins.

Thanks to the rising heat, it’s an uphill struggle to get to the New Zealand ceremony but a glance at the old trenches at the side of the road makes sure complaints are never given voice.Given voice at Chunuk Bair, however, is Lieutenant Colonel William Malon’s last letter to his wife, written August 5, 1915.

“My desire for life so that I may see and be with you again could not be greater, but I have only done what every man was bound to do in our country’s need,” the words from the grave fly out over the crowd, each an unavoidable spark of pride, honour and love lost.

“I am prepared for death and hope that God will have forgiven me all my sins.”

He was killed three days later and remains one of the many New Zealanders with no known grave at Galipolli.As the dignitaries tenderly lay the wreaths at the foot of  the towering memorial the night’s chill has now completely given way to the sun’s relentless scorch. It’s yet another feat of endurance but, as we are all now fully aware, nothing compared to the suffering, the fear, the bravery of our predecessors. 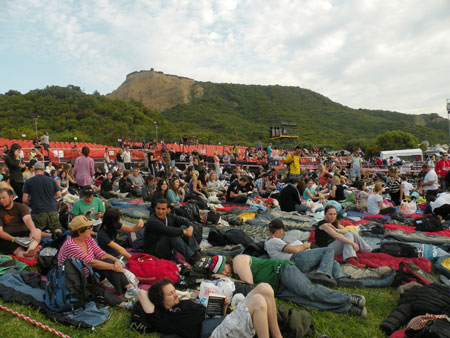 The history of Gallipoli is littered with stories about the camaraderie between the opposing sides. As boredom set in there was a “constant traffic” of gifts being thrown across no man’s land: sweets and fruit from the Turkish soldiers, and cans of beef and smokes from the Allies. There are tales of one old Ottoman batman being allowed to hang his platoon’s washing on the barbed wire without attracting fire.

At one stage, a ceasefire was declared and the two sides moved their dead and wounded. The tradition of friendship is continued today in Turkey where New Zealanders and Australians are greeting warmly and treated with respect throughout the country.

WHEN TO GO: Anzac Day is on April 25.
GETTING THERE: Fly to Istanbul with EeasyJet, BA, Turkish Airlines or Pegasus. It’s about six hours by bus from the city to Gallipoli.
GETTING AROUND: An organised tour is the only way to attend the Anzac Day services at Gallipoli. Check out options at tntmagazine.com/toursearch.
VISAS: Australians, South Africans and Britons need to buy a visa on arrival – Kiwis don’t need a visa.
CURRENCY: Turkish lira. 1 GBP = 2.38 TRY.
LANGUAGE: Turkish, but English is widely spoken in tourist areas.
ACCOMMODATION: At Gallipoli you’ll be sleeping under the stars; you cannot pitch a tent. In Istanbul, dorms start at about 20 TRY and doubles from 40 TRY.
GET MORE INFO: tourismturkey.org; onthegotours.com

» Jahn Vannisselroy travelled as a guest of On The Go Tours who specialise in locally guided adventure tours. On the Go offers ANZAC tours from four-14 days. An 11-day Bonzer tour from April 23 to May 3 (only three days off work in 2011 for the average worker) costs £599 including nine nights’ accommodation in 3-4 star hotels including breakfast, six dinners, all guiding and transportation as part of the itinerary. Excludes flights. (020 7371 1113; onthegotours.com)

6 Tips For Designing Your Dream Kitchen