With Tim Bresnan out injured, conventional wisdom had another seamer slotting straight in. Never so simple – England sent two debutants out in the form of left-arm spinner Simon Kerrigan and all-rounder Chris Woakes, who presumably replaces batsman Jonny Bairstow.

Australia had decided to name their side a day early, adding James Faulkner – a bowling all-rounder – to their squad in place of Usman Khawaja, another casualty of the three spot.

But then they all got on with it – and it was more or less the Watto show. 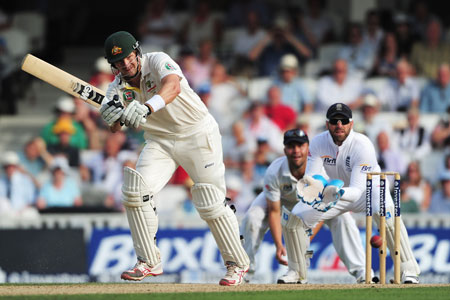 Watson, who’s been up and down the order throughout the series, came in at number three this time when David Warner went early for six, and gave the new kids in the home side a rude welcome, especially Kerrigan, whose first spell in Test cricket lasted two overs and went for 28 runs. 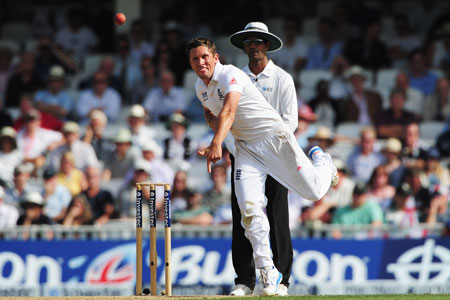 Watson added 107 with Chris Rogers, who sat back and watched the show before he was dismissed by Graeme Swann, caught by Johnathan Trott for 23 off 100 balls.

Having watched a torrid Stuart Broad spell at his skipper – and from most reports his main coach over the past week – Michael Clarke, who went for 7 off 39 balls, Watson dug back in.

It didn’t all go his way though, after scoring just his third Test century, with a Broad beauty smacking into the back of his head. He forged on though. 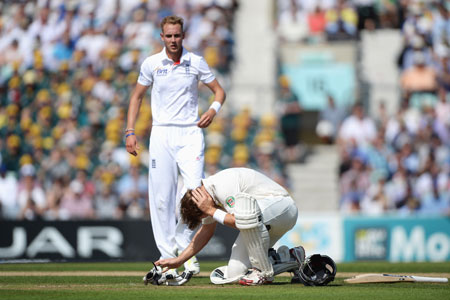 Watson’s 150 came up with his new mate Steven Smith on 31no and Australia 3-228, already happy to call it a good day.

The pair built a strong partnership, with neither of them the kind to let the scoreboard attendant get bored although tight bowling was keeping them fairly under wraps.

Smith reached his 50 at about 5.30pm, with the hairiest moment the first ball he faced that he decided he wanted to flash at – thankfully he missed it. 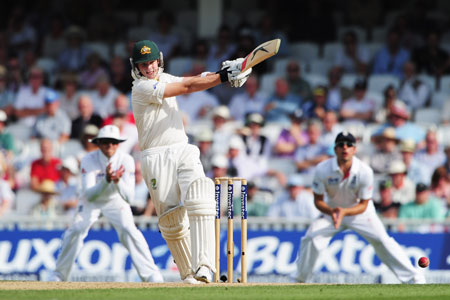 Another reason the day was Watson’s is the fact he reviewed an LBW decision … and wasn’t out. He’s been caught playing across the line throughout the series but this one from Woakes stayed low and hit him on the quad – it was flying over. That’s his first review in 10 that has been correct. He was on 166.

Soon after England took the new ball and Watson was only able to add 10 more to his score. 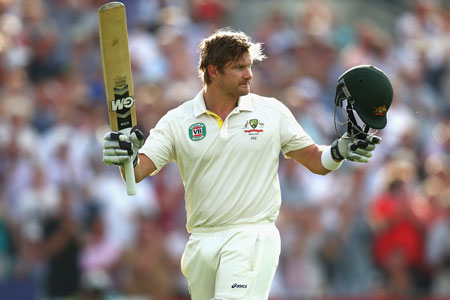 With a double-century on the cards, the big fella went after a short ball from Stuart Broad (which was a millimetre from being a no-ball) and was caught by a cracking catch from Kevin Pietersen in the deep. Australia were in the box set at 4-289.

Cue the arrival of ‘nightwatchman’ Peter Siddle, one of the five seamers at Michael Clarke’s disposal in this match – he’s 18 from 15 balls, so hardly shutting up shop.

He’s protecting the wicket of keeper Brad Haddin and James Faulkner, who while an all-rounder is more of a bowling one.

So as it stands, Australia are 4-307 after a bit of weird day one, in which both sides have played ith spirit but selections have suggested they’re both looking towards three months from today when the slate is wiped clean for another five matches, starting at the Gabba.