The US music and left wing politics magazine established in the sixties splashed the headline in this week’s issue “The Bomber: How a Popular, Promising Student Was Failed by His Family, Fell Into Radicalism.” 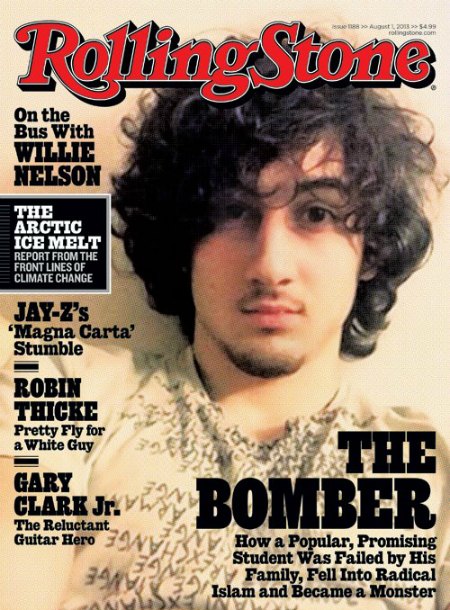 Rolling Stone’s Facebook fans were critical of the decision to give Tsarnaev the coveted cover splash.

“Oh look, Rolling Stone magazine is glamourizing terrorism. Awesome. I will NOT be buying this issue, or any future issues,” said Adrienne Graham.

“I am ending my subscription. This is bullshit. Let’s honor those who hurt innocent people. Who’s next, George Zimmerman?? Rolling Stone is a music magazine, not the Taliban Times,” said David Beck.

The hashtag #BoycottRollingStone has been widely used on Twitter.

The report in the magazine suggested that the accused killer, also known as Dzhokhar Tsarnaev, who recently pleaded not guilty to causing the Boston Marathon bombings in April, suffered from a troubled home life.

Jahar Tsarnaev’s brother Tamerlan reportedly told his mother that he felt like “two people” were inside him.

“She confided this to a close friend who felt he might need a psychiatrist, but Zubeidat believed that religion would be the cure for her son’s inner demons and growing mental instability.”

Rolling Stone published on its website ‘Five Revelations’ on how Tsarnaev ‘became a monster’.

Three people were killed by the bombing at the historic US marathon event this year with more than 260 disfigured and injured.

UPDATE 18/07/13:
Rolling Stone has released a statement preceding the full feature, Jahar’s World, on their website:

‘Our hearts go out to the victims of the Boston Marathon bombing, and our thoughts are always with them and their families. The cover story we are publishing this week falls within the traditions of journalism and Rolling Stone’s long-standing commitment to serious and thoughtful coverage of the most important political and cultural issues of our day.

‘The fact that Dzhokhar Tsarnaev is young, and in the same age group as many of our readers, makes it all the more important for us to examine the complexities of this issue and gain a more complete understanding of how a tragedy like this happens. – THE EDITORS’

Maybe I’m old fashioned but putting the Boston bomber on the cover or Rolling Stone is a terrible idea.

How to Write a Great Speech