But now Alastair Cook’s men are focussed on winning the series when the series continues with the fourth Test on Friday in Durham.

“There are no extravagant celebrations … we want to win the series,” Cook said after rain ruined the day’s play when Australia were going for the jugular to win their first match of the series.

“We are only three matches into a five-match series and are two-nil up, so we want to win at Durham.”

“The first objective was to retain the Ashes – now we want to go on and win them. We need to up our levels a little bit at Durham.”

England had to bat out the day to save the match and fell to 3-37 before lunch.

The Aussies’ chances of keeping the series alive were cruelled before an over could be bowled after lunch due to rain and by 4.40pm the game had been abandoned as a draw. 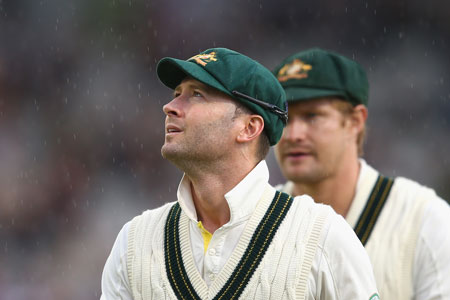 Aussie captain Michael Clarke, who scored an excellent 187 to give his side control of the game from the outset, said his team was gutted but now focussed on drawing the series with wins at Chester-le-Street and London’s Oval.

“If we can level the series we will take a lot of confidence back to Australia,” he said as they take momentum and the knowledge they can outplay England to Durham.

“I’m confident if we play the type of cricket that we have through the four days here that we will give it a real good shake.”

“We’ve got some work to do over the next few days to make sure we are as well prepared as we were leading into this Test match. We need to play with the same attitude, intent and I’m confident we can have success.”