The Baggy Greens are 180 for three at lunch with captain Michael Clarke on 55 and Steve Smith on 20.

Roger’s wicket, however inarguable was nevertheless a controversial one after the Lancashire members were moving behind the bowlers arm throughout the over.

But there was no question about the decision, the ball straightened perfectly on Rogers, hitting him ankle high on the front leg. Hawkeye showed the ball would have hit middle and off, halfway up. 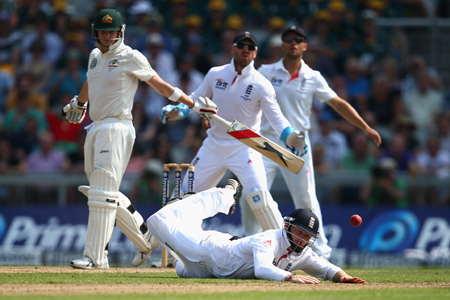 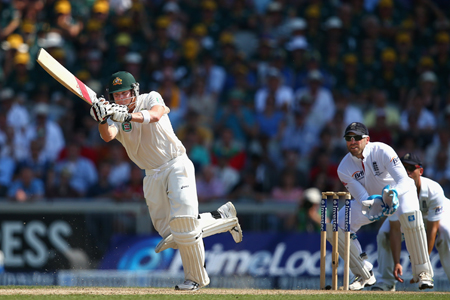 Swann almost added Clarke to his list of victims soon after. The Aussie captain, who had bumbled and slashed his way through his innings, was trapped back on his crease and hit on his back leg.

England reviewed the not-out decision, and despite Hawkeye showing that the ball was going on to hit leg stump, DRS saved Clarke with a borderline umpire’s decision verdict.

Clarke took his opportunity and began to look more assured at the crease as England’s frontline seamers failed to pose much of a threat.

Bresnan was the pick of the England pace attack while Swann and Clarke continued an enthralling battle for much of the session.

The Aussie captain used his sterling footwork to keep Swann at bay, before the England spinner began to pose more problems by attacking Clarke round the wicket. 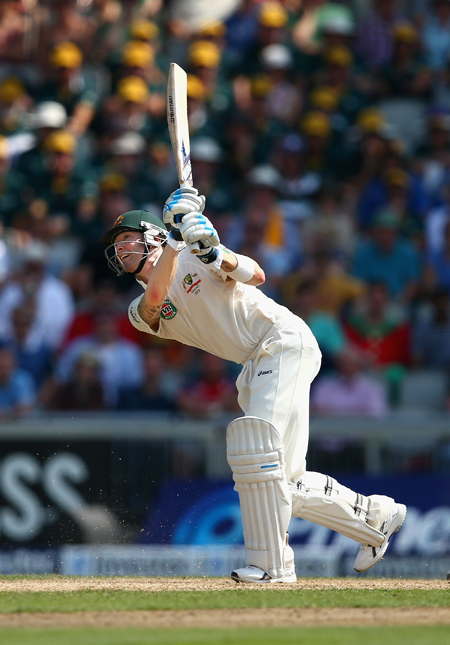 Clarke reached his half ton with a straight drive down the ground about halfway through the session.

Smith, who has at least been credited in the first two Tests as looking confident at the crease, continued that theme, taking his time to bat himself in, while showing great form and inventive shotmaking to punish anything loose.

Prior was adamant Smith had edge one from Swann but the on-field umpire was unmoved. England reviewed the decision but there was no evidence at all that the ball had hit the bat.

With Clarke yet to put together a knock of real note this series, and Smith looking assured Australia will be stressing the importance of building their partnership in the final session.

If Australia can finish the day on 250 for three, they’ll be looking for 380 or 400 before lunch tomorrow. That strikes this reporters as a well-above par score on a pitch that is already turning for Swann, looks fairly quick, and will breakdown quickly when it goes.

Thanks for coming to the 2010 TNT Travel Show