Agar, no doubt buoyed by the scalp of the England captain in the morning session, double his tally of international wickets shortly after lunch, Jonny Bairstow prodded at a tempting delivery and edge to Haddin who took a regulation catch.

Bell, under pressure coming into the test following muttering about his form, steadied the ship, with a patient innings.

Prior, who was coming into the series with fairly few runs this summer, looked solid notching up a quick fire 31, before toe-ending to mid-on. 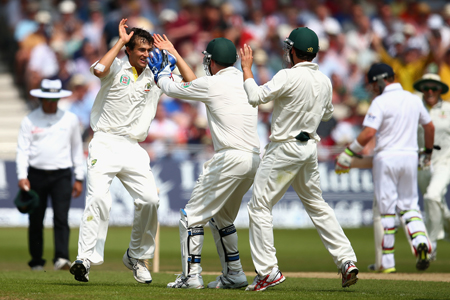 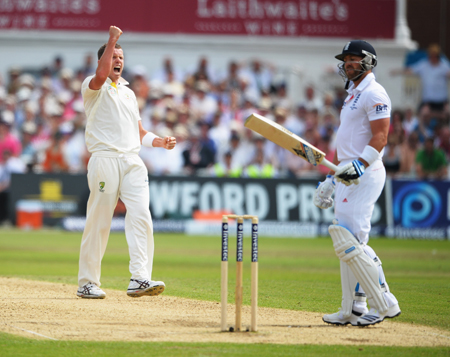 The England would-be all-rounder was duly bombarded with some sweet chin music as the Aussie pacemen looked to push him back into the crease before attacking with yorkers.

Broad blocked his way through to tea, before getting a start with some strong shot play on the resumption. He resisted the urge to pull and hook and managed to build a solid innings. 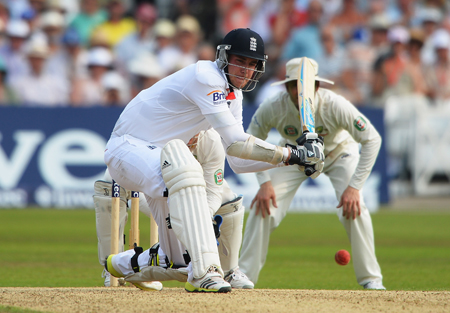 Bell pootled on to his 50, before upping his strike rate, opening his shoulders and finding the boundary rope with more regularity in the evening session.

Broad, who shall surely be known as Harry Houdini for the rest of the series escaped a nailed on dismissal, edging prodigiously to Clarke at first slip.

The only possible excuse for umpire Aleem Dar’s not-out decision was a deflection the ball took off Grant Haddin’s gloves, but the edge was plain to see.

Haddin missed a tough edge down the leg side from Bell Starc shortly after. 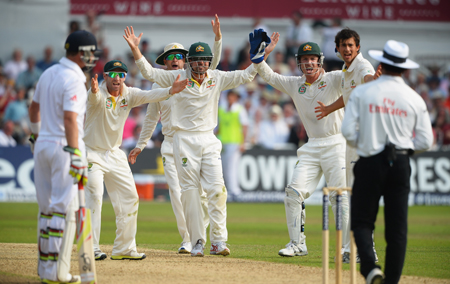 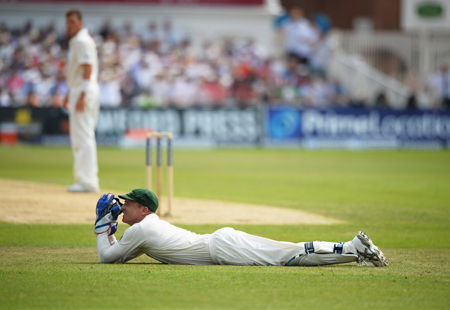 The English will say that it was karma for yesterday’s controversial decisions, despite both Trott and Root probably being out.

Broad and Bell solidified their position as the evening session wore on, frustrating the Aussie attack who looked to be running out of ideas.

Shane Watson miraculously managed to bowl 13 overs for just three runs, before a thick edge through the slips from Bell took him to seven.

Bell and Broad continued to build a partnership, pushing England into a strong position at the close of play on 326-6. With Bell and Broad just a boundary short of their ton and 50 respectively.