Watson fell lbw to Broad early on in the session before Joe Root induced an edge from Ed Cowan with the last ball before tea.

After lunch England needed a breakthrough; Cook brought Jimmy Anderson and Graeme Swann into the attack as Watson and Rogers continued to build on their partnership.

The English bowlers had very little to work with in terms of the ball. England, usually so good at coaxing reverse swing from the Duke ball, were getting nothing.

Watson continued to lead the scoring, while Rogers nudged and prodded his score along judiciously.

Watson was lucky after an inside edge disappeared between his legs, hit the ridge of a batman’s mark and turned away from the stumps.

Despite edge after edge falling short in the morning session the English slip cordon steadfastly refused to learn, as yet another edge from Watson fell short of Swann at first slip. 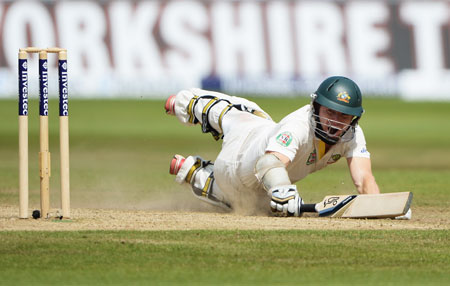 A symptom of Cook’s captaincy is perhaps an over-reliance on the by-the-book way of playing the game. Despite the obvious evidence the slips needed to move up, he stuck to the standard formation.

England were flat up until the drinks break, with Australia looking firmly in control.

It took the drinks break to wake up the crowd with Stuart Broad notching the wicket of Watson lbw with the first ball after the resumption.

It looked plum, but the opener reviewed it, and Hawkeye showed the ball was just clipping leg stump. Watson could feel hard done to, he deserved his 50, and it was the type of lbw call that often go the way of the batsman.

Hughes was given out caught behind from Swann but immediately reviewed it. There was a hint of confusion after the batsman thought for a second he’d been given out lbw. Hawkeye showed that the ball was missing leg stump and side-on hotspot, working perfectly, showed he hadn’t edged it.

It was understandable to see why umpire Dharmasena gave it, the ball looking like it had deviated off the bat when it had in fact hit the pad. 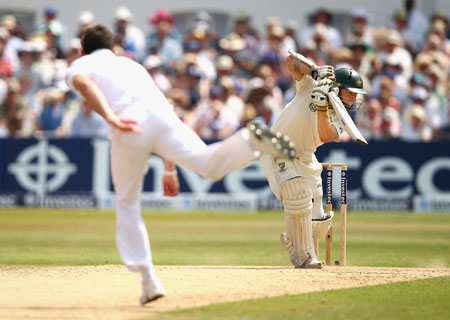 The new batsman Cowan survived his king pair ball, and despite a nervy opening began to look impressive at the crease, taking on Swann.

The Aussie stepped back and hammered the England spinner through backwards point for a four which brought up his 1000 runs in test cricket, coming in just 18 matches.

Rogers in just his second test at 35 years old notched his first 50 shortly after. It was a clever utilitarian innings on a low, slow pitch. 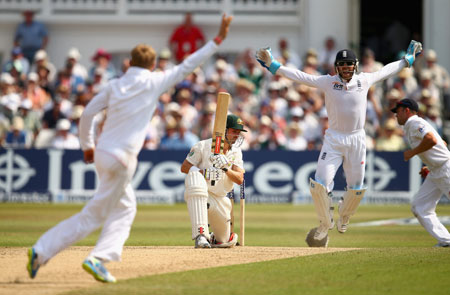 England’s attack continued to struggle, with Cook eventually turning to Joe Root to hold up an end until tea.

And the Yorkshireman, with his low, round action, claimed the wicket of Aussie dangerman Cowan; attempting an expansive drive he edged to Cook at first slip.

Weekend of peace on the Norfolk Broads