Darren Lehmann’s charges will be bullish about their chances with their long tail, and Australia’s first innings top-scorer and one of their most destructive batsman at the crease at the start of day five.

But England will know they are favourites after claiming the vital wicket of Australian captain fantastic Michael Clarke and prompting a mini-collapse in the last hour of the day.

Lehmann will be annoyed at the loss of some cheap wickets, Ed Cowan and Chris Rogers both fell making poor shots.

The session started promisingly for the Three Lions, a cutter from Anderson tricked Rogers into mistiming a leg glance, sending it looped up to Bell at mid-wicket. It was a perplexing end to the Aussie opener’s innings during which he’d sensibly nurdled the ball around.

Swann, into the attack, wasn’t in his usual fine fettle, misfiring in his second spell of the session, offering three full tosses in one over to Clarke. 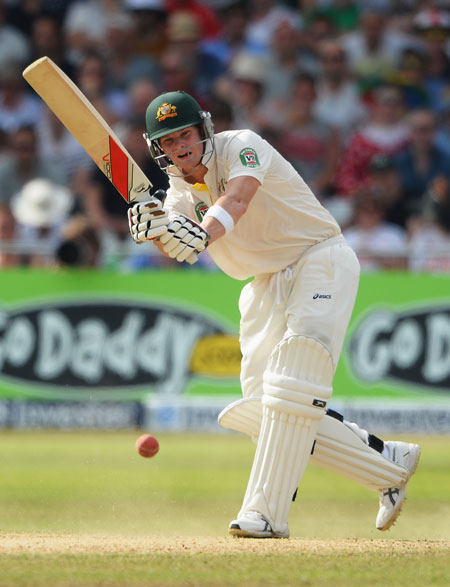 And it was only for the misfiring of the Australian captain that kept the world’s form batsman from making hay.

Finn, returning to the attack after being bowled for just three overs in the innings, suddenly looked full of vim and danger, beating Smith’s edge on a number of occassions.

A great delivery darted in clipping Smith’s pad en-route to the bat, Dar was unmoved and Cook decided not to review. It proved a good decision, despite Hawk Eye showing the ball was going on to hit middle and off, it hit outside the line.

England started to apply some solid pressure for the first time in the session, with Swann finding his length if not much turn off the pitch. 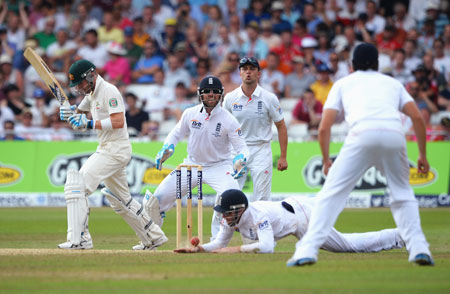 Clarke continued to play Swann with the skill he has become known for. The runs though dried up, Australia went a full 45 minutes without a boundary, and it was only a thick edge from Clarke that ended the slump.

Australia continued to inch forward with sporadic singles. Clarke prodded himself to a start and it was rewarding for all cricket fans to see him, returning from a lay-off with his chronic back problem, showing the great touch and footwork that lead him to establish his above-50 average in test cricket.

Alas, he wasn’t to reach his average this time: Late in the day he edged a skiddy delivery from Broad. Aleem Dar kept the crowd waiting, checking with Dharmasena that the ball had carried, which the Sri Lankan duly confirmed it had, before giving the Australian captain out.

Clarke reviewed the decision, but hotspot confirmed the edge. And his partner Smith joined his captain back in the hutch with the next ball, the first of Swann’s over. 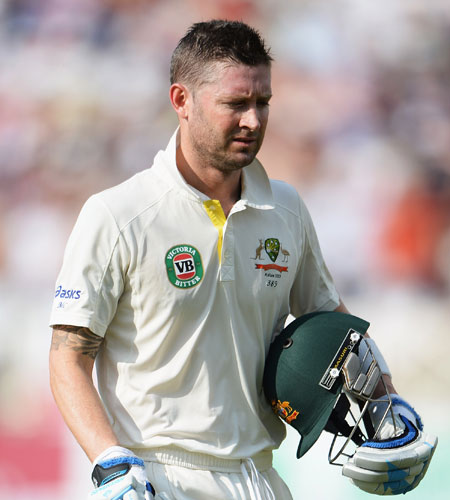 Playing off his back foot Smith failed to pick the turn, and was trapped plumb lbw. Hawk Eye showed Dharmasena’s decision was spot on, the ball going on to hit middle and leg.

All of a sudden Australia had gone from favourites to all square, needing 149 runs to win with just five wickets in hand.

And things soon got worse, with Swann turning a ripper from around the wicket to Phil Hughes who was trapped absolutely plumb on his back leg.

The only question was whether the ball had pitched outside leg. Dharmasena thought it hadn’t, England did, and referred the decision. Hotspot showed no edge and Hawkeye showed the ball had just pitched inline.

The decision was overturned and suddenly Ashton Agar, promoted to number eight was at the crease. 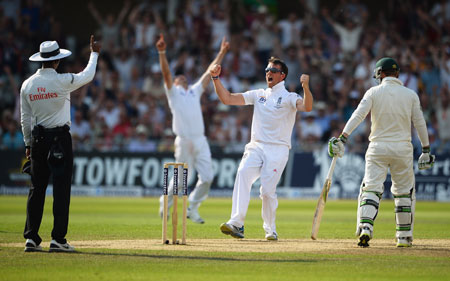 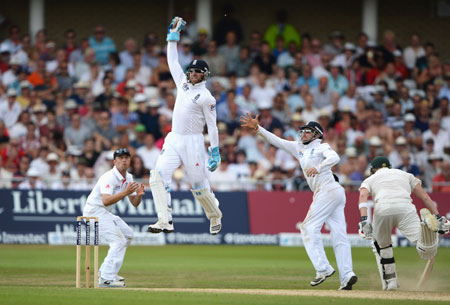 He and Haddin stemmed the flow of wickets with some judicious batting. The 19-year-old showed he’s not just a one-dimensional batsman, defending his way through the final overs of the day under huge pressure.

Australia need 137 to win, with four wickets in hand. Can Agar repeat his first innings heroics?