Broad got a thick edge early-on following the resumption that bisected first and second slip, as Shane Watson and Michael Clarke left it to each other.

Mitchell Starc had a loose opening spell which came to a premature close when captain Clarke decided enough was enough, and went to Peter Siddle to stem England’s run-rate which had crept to 4.19 an over.

The English crowd, showing what they thought of Broad’s much-discussed actions yesterday, gave the seamer a standing ovation as he left the pitch with England’s lead at 291. 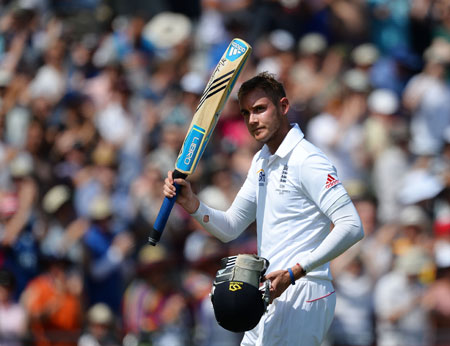 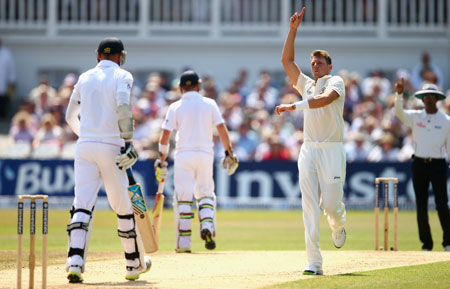 Bell was out not long after for 109, edging from Mitchell Starc to Grant Haddin. It was a vital knock from the centurion who had been criticised by some in the run up to the first test, with the suggestion England’s number five had been coasting for a while, getting starts which weren’t being converted into meaningful contributions.

But on a low, slow wicket, Bell showed tremendous concentration to build his score with runs through mid-wicket and cover.

With Swann and Finn at the crease the first mutterings of an English declaration began to be heard among the pundits and tweeters, especially given the almost opening-batsman like approach from the tailenders, who looked content to block.

Graeme Swann seemed to spend a good deal of his innings investigating the rough patches. The England spinner’s cameo at the crease was at least entertaining, after he first hit an improbable leading edge down the ground for four, before edging to Clarke who took a sharp catch at second slip off Peter Siddle.

Australia need 311 runs to win and they’ve got five and half sessions to do it.

Key to Australia’s run chase will surely be Shane Watson and Michael Clarke, and all bets are on the position in the batting order of Ashton Ager. Four perhaps?

Theatre Review: The Wind in the Willows