The London Restaurant Festival is a feast for all the senses, mainly the taste buds, with some of the city’s most celebrated eateries hosting events showing why they’re the créme de la créme, but at prices we can actually afford, and hundreds of up-and-coming restaurants proving they’re ripe for success.

Showstoppers will include ‘Gourmet Odysseys’, in which diners pack into Routemaster buses and tour along a trail of restaurants, eating a course in each.

Other establishments have compiled special menus, starting at a very reasonable £8.95pp for two courses and a bevvie. There are also tapas tours and Sunday lunch spectaculars.

At the festival’s ‘Eat Film’ evenings famous foodies such as TV host Michela Chiappa, writer Tom Parker Bowles and chef Russell Norman will create dishes based on their favourite flicks – diners will watch the movie before tucking into the meal it inspired.

Restaurateur Norman, who owns Soho’s trendy Venetian hotspot Polpo, among others, is hosting his night in the Sanctum Hotel with a menu based on 1987 cult black comedy Withnail And I.

“Despite the fact it’s a film that’s remembered mostly for booze and drugs, there are actually quite a lot of great food moments,” Norman says.

“When Uncle Monty is preparing the lamb at [the cottage] Crow Crag he talks about only being able to handle meat once it’s cooked, saying: ‘As a youth, I used to weep in butchers’ shops’. And I love the way he punctuates ‘garlic, rosemary, salt.’”

It will shine a light on London’s favourite foodie strips, including Exmouth Market, Bermondsey Street, Marylebone High Street, Brixton Village, Charlotte Street and Soho, each on a different night of the festival. 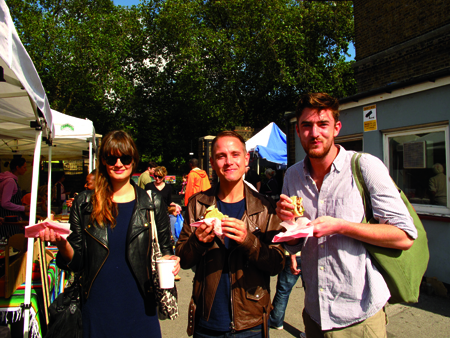 A Graze keyring (£12.50) will get diners a free glass of wine when they buy a dish from any of the participating restaurants.

“Everyone always wants to have the best of all worlds when they’re on a street with so many good restaurants,” Coghlan says. And now they can.

But there are plenty of great events that don’t break the bank, as well as food markets, sushi lessons and a cake bake-off, making the festival accessible to all food-lovers.

And keep an eye out for ‘Side Order’ events – last year’s  included the transformation of The Old Vic Tunnels into a subterranean maze by Pret-A-Diner and a ‘cockney dinner’ in London Fields’ Prince Arthur pub.

“Foodies, hipsters, families and City boys all rub shoulders at the London Restaurant Festival,” Coghlan says. “It doesn’t pinpoint any one demographic because everyone loves food!

“The London restaurant scene, in terms of diversity and ambition, is the best in the world,” he adds.

“It offers more affordable options than Paris, more variety than Tokyo and is now in the same league as New York.”