It was even more of an ambitious target after first session, which mostly featured Australia’s pacemen spraying the ball every which way and being lucky to have England two down courtesy of a poor shot from Alastair Cook (13) and a Yorker from Peter Siddle (5-50) to debut opener Joe Root (30).

But the middle session, in which the hosts lost the four key wickets of experienced batsmen who almost all got starts – Kevin Pietersen 14, Johnathan Trott 48, Ian Bell 25 and Matt Prior – and the start of the third, where they rolled through the English tail – only Stuart Broad (25) reached double figures – was a whole other story. 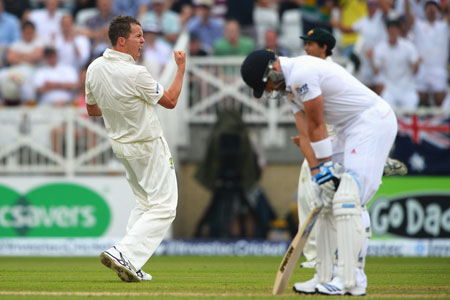 Australia were in a strong position finishing off the England innings for 215, with Mitchell Starc finishing with 2-54 and James Pattinson with 3-69.

They simply had to keep cool heads and see out James Anderson and Steve Finn’s new ball onslaught. Easier said than done though as four wickets fell cheaply.

New opening pair Shane Watson and Chris Rogers strode out and looked comfortable. Watson dispatched any loose rubbish from Finn to the off-side fence while Rogers might as well pitched a tent, such was his intent to stay there. 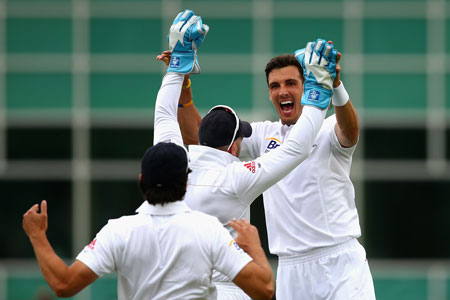 But when Finn got one to nibble off the seam to Watson (13) all the big all-rounder could manage was an edge to Joe Root at third slip.

Ed Cowan, given the coveted number three spot held by some of the greats of Australian cricket, chased his first ball way outside off stump that he’ll be kicking himself for playing at – he edged to Swann in the cordon for a golden quacker.

Clarke was never totally settled after coming in at four to perform his customary rescue mission, but irresistible Anderson produced an unplayable peach which curved slightly in and nipped back to clip the top of off stump to take the skipper for a duck.

They were pretty excited when this happened. 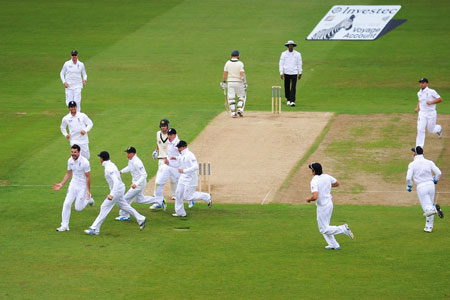 Australia was reeling at 3-23.

Rogers was still standing strong though as Steve Smith, not Phillip Hughes, came in at number five.

Middlesex skipper Rogers left anything he didn’t have to play while Smith punished anything he liked the look of.

But after an inexplicable drinks break 30 minutes from the end of play, Anderson pinned him back and got an LBW decision from umpire Dharmasena – it looked close and when Rogers went to the video umpire we saw how close. It came down to the umpire’s call (if he’d been given not out the decision would have remained that way.

Now Australia needs a big partnership and it should be from the unconventional techniques of Smith, who couldn’t have been less intimidated by Graeme Swann as he danced down the wicket and dispatched him for six (see main image), on 38 at stumps, and Hughes on seven. 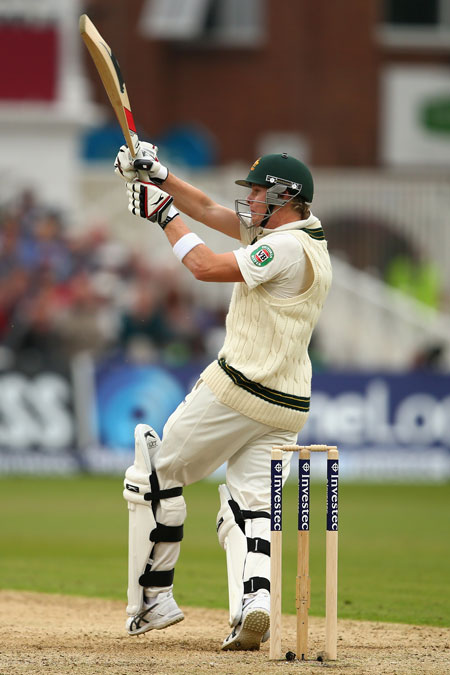 England have the upper hand but dominance is on a knife’s edge, with a good period for either side putting them on the proverbial top.

Cook will be keen to see Stuart Broad firing after the all-rounder didn’t take the field following a knock on the shoulder while batting. He was undergoing treatment and can bowl as soon as he takes the field.