‘The conditions here are quite unique. They are a bit different to what you get everywhere else.

“I think this sort of wicket will be a result as long as it doesn’t rain all the time.”

If Australia can get a result in Manchester over the next five days, it’ll most certainly be game on and help from the man who delivered the “ball of the century” here can’t hurt. 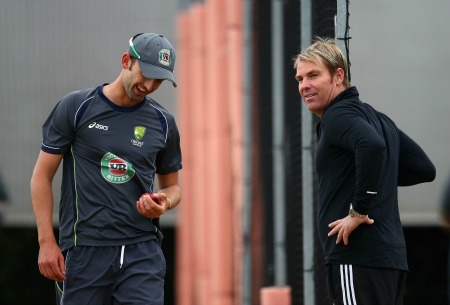 “I think Australia have a good chance and if it is 2-1 going to Durham, where anything can happen up there, they’re back in the series,” Warne said responding to the chuckles that meet Michael Clarke every time he says his team can win.

Clarke himself has called on his batsmen to stand up, protect their wicket and give the scoreboard attendant some work.

“I honestly believe we can win this series,” Clarke said.

“I know there’s a lot of people out there that will laugh at me saying that. But I wouldn’t be here today if I thought this team wasn’t good enough to have success.

“The reality is our backs are against the wall.”

Au revoir, circumflex – why is the French language changing?