Ashes 2013: OFF STUMPED – Time for batsmen to show some ticker or Aussie cliches will be lost

They haven’t just been outshone by their bowlers this tour – with the exception of the spinner who has the top batting score – they’ve put  a Mr Monty Burns-sized blocker over the sun.

Whoever lines up today, and it’ll probably include David Warner, will have to fight tooth and nail in the dark to win back some fans.

The critics are rampant, too. But the people they owe it to are the blokes who steam in for three days and keep hitting the pitch hard and are reward with not even a day’s rest by batsmen who give their wickets away too easily. 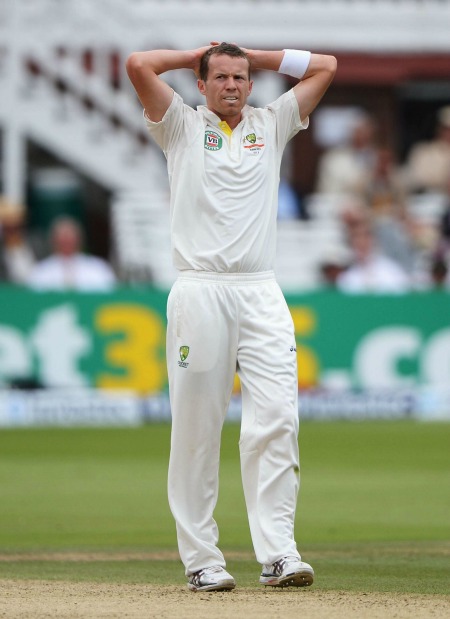 Against Sussex a few batsmen got scores, which might be good for their confidence, but fact is only Steve Smith went onto a hundred against this sub-par bowling attack. James Anderson and Graeme Swann they were not.

Warner has hunger and hasn’t been party to the beat-down so far in the series, and when he got a start for Australia A in Durban to earn his recall, he didn’t throw his wicket away, he amassed a quickfire 193.

Allan Border, one of the most measured of cricket watchers, said he’d be “embarrassed” if he was in the Aussie top three. A fair call on Shane LB Watson and Phillip Hughes, perhaps harsh on Chris Rogers given the manner of a few of his dismissals so far, but the biggest crime as a batsman after going cheaply is to not go on with it once you get a start.

The Aussies must find a way, basically, harness that Aussie fighting spirit that has been so absent so far that it’s no longer worthy of being a cliche.

Beware the wounded giant is another cliche that could work here.

Limp, defeated and giving up won’t be accepted and, regardless of the result at Old Trafford, heads will roll if they don’t show a bit of ticker.

Then they’ll be giving the bowlers a fighting chance, and those of us so keen on a close contest what we deserve.

And England will given them every chance to show it too  they’re baying for blood, two Tests up with just a draw required to retain the Ashes, a stupid term but one that really means Australia can’t win the Ashes.

Test cricket is named for a reason. The exam set for Australia is that over the maximum 15 days of cricket remaining, 35 sessions, they must play better than England in two thirds of them. Begin.

Planes, trains and tuk-tuks: Uganda to Zambia and back

The best of New Zealand at Rotorua