First to fall in the session was opener Chris Rogers, in a future what happened next clip incident, the 36-year-old swotted at a waist-high full toss from Graeme Swann, missed, and was hit on the box.

The appeal went up and it was given lbw by umpire Marais Eramus. Rogers, conscious of the paucity of the reviews left for Australia, conferred with Usman Khawaja at the non-striker’s end, but in the end walked.

Rogers would’ve been right to review as Hawkeye showed the ball was slipping well wide of leg.

Jonathan Trott then dropped an absolute dolly of an edge off Phil Hughes from Swann. But England constantly looked threatening, and it was Tim Bresnan next into the fray.

The Yorkshireman found the thinnest of edges from Phil Hughes, who immediately referred the decision. Hotspot showed a slight nick, and the stump mic recorded a sound as the ball passed the bat.

Hughes looked flabbergasted when the on-field decision stood, but there was an edge.

Khawaja never looked settled and failed to take advantage of his lifeline from Trott. The 24-year-old tried to hammer Swann over mid-on, but instead found a leading edge which sent the ball skyward, eventually finding Kevin Pietersen walking in from widish mid-off. 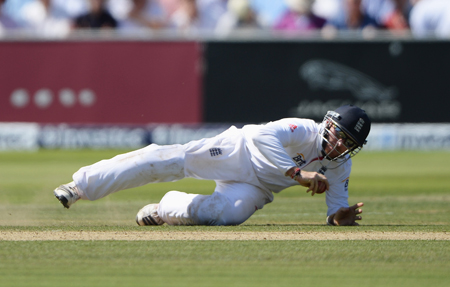 Steve Smith arrived at the crease under serious pressure and soon fell to Swann after Ian Bell took a great catch at short leg off the batsman’s glove.

Captain Michael Clarke, who’d looked in fabulous touch to notch a quickfire 28, fell to Stuart Broad in the next over.

The Englishman teased Clarke with some chin music before throwing in the yorker which trapped Clarke in front of middle and leg. 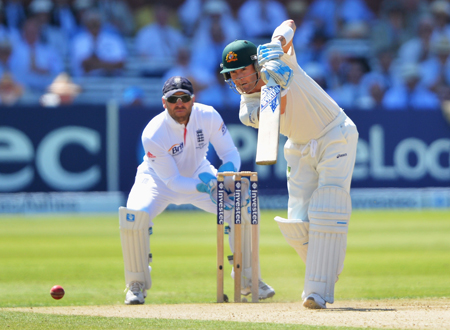 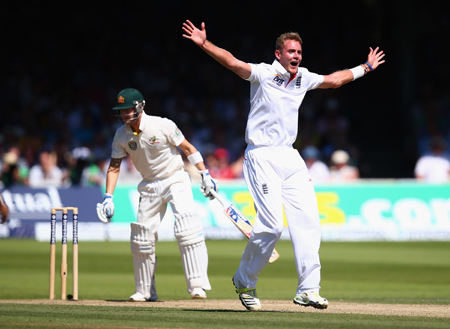 The follow-on target of 162 seemed a distant prospect but with the performance of Australia’s tail in the series no English fans would be taking the next four wickets lightly.

That’s why there was a palpable sense of relief and bemusement when Ashton Agar, carrying a hip injury, was run-out. Three quarters of the way down the pitch, on what by-rights was his call, he was sent packing by Brad Haddin and was run-out at the non-strikers end by a foot.

It was a baffling decision by the Aussie wicketkeeper and strictly speaking not his to make.

England will be buzzing at tea after it seemed that the Aussie’s had managed to restrict the Three Lions to a below par score on the Lord’s wicket.

Cook must surely be looking to clear the Aussies out by the close of play, but, given his past record, will he enforced the follow-on should Australia fall short of the required score?

Clarke on the other hand will be devastated with the performance of the top order. The weakness that every pundit the world over had picked before the series is becoming Australia’s downfall.