The easy-going hustle and bustle of Auckland has a lot in common with Amsterdam’s Red Light District. Stay with us, we’re going somewhere here…

Like the District (and its workers), Auckland spreads itself far and wide (ahem) and when visitors arrive in both, they tend to get stuck in one place, neglecting to explore the beauty and culture of the surrounding areas.

It’s probably not by chance that the Red Light District popped into our head, though, as admittedly some of the nightlife here is not a million miles away from the ’Dam’s sex-laden streets.

Spy Bar in downtown Auckland is the biggest meat market in town, open until a foot-blistering 10am. Here the musical calibre is exchanged for availability and sheer numbers of single boys and girls aged 18-25.

Auckland also has a thriving trade in dancing girls – and brothels. Showgirls, on Customs St, is strangely hip – a friend calls it “sometimes trendy”. The White House is a big ‘adult entertainment centre’ on Queen St, modelled and themed on politics and the US White House; this place shames the Oval Office almost as much as Bill Clinton. And Femme Fatale offers probably the best girls in Auckland, though we’re told that’s not necessarily a recommendation.

Auckland’s beauty is not all skin deep, though. Despite the seemingly obvious pitfalls of building a city within a bosom of volcanoes (surely Dante’s Peak should be on their curriculum?), what Auckland’s town planners lacked in common sense, the city makes up for in great scenery.

Several of these mountainous uprisings are worth visiting. One Tree Hill and Mount Eden are two nearby mounds, both offering great views only a few minutes from the city. For a cheap way to see the natural beauty of Auckland’s sprawling suburbs, head up there before dusk and watch the sun set behind the water’s edge. It’s stunning.

To truly appreciate Auckland though, you have to head off the mainland and onto its islands. Rangitoto is Auckland’s most recent volcano, barely 600 years young, and its size, symmetry and dominance over the entrance to the harbour make it one of Auckland’s most iconic landmarks.

A short ferry ride over and you’re faced with a land that time forgot. Upon further inspection, the looming green mountain behind is ominously reminiscent of Lost. The strangest, yet most appealing thing, is the complete and utter lack of noise. Due to the acidity of the soil, very few birds inhabit the island.

The next closest inhabitable Island is Waiheke. Locals talk about how much the place has changed in the last 15 years, with tales of a bourgeois elite battling hippies and backpackers to stake their claim on a treasured piece of land. Yet it’s barely touched and wonderfully reminiscent of a Mediterranean getaway.

Once you’ve got your fill of scenery, however, and are feeling suitably relaxed, there’s only one thing you can do – embrace your suicidal tendencies and take on one, or a few, of the many crazy, adrenalin-pumping activities that Auckland so thrives on. After all, you’ll never appreciate a view more than those few seconds before plunging towards the ground… 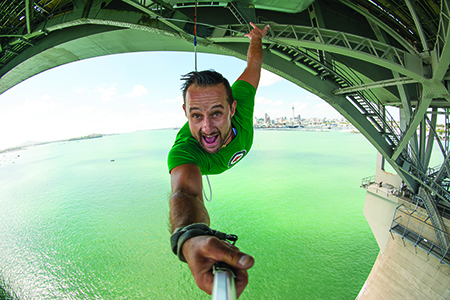 It just so happens to be one of the most miserable days of the year – raining, cold and extremely windy. Nevertheless, there are three of us up at 10am braving the elements. Walking along the purpose-built structure under Auckland’s harbour bridge, I think I must be insane. I’m about to do a bungy jump (bungy.co.nz, jumps $160). If we had not been harnessed to the railing, I’m sure at least one of us would have been blown off into the water below.

I selflessly let the two Irish guys jump before me. One of them said he wanted to get soaked in the harbour, but as he jumped, only his head got dunked in. Now, when I get nervous, I usually talk it up like I’m not scared at all, so I turned to the bungy instructor and said: “You only got his head wet! Come on, that’s nothing.” The guy just looked at me and grinned. I didn’t like the look of his expression at all. It was the kind of face the tough guy gives in a movie before he kicks some ass.

Sure enough, I got a proper dunk – almost totally under water, literally up to my shoes. I came out of it utterly soaked, but grinning like a gold medal champion.

A 1.2m wide metal grate is the only thing separating my body from the pavement below. Far, far down, cars glitter like coins at the bottom of a water fountain. They move slowly along the long white veins of winding roadways linking together Auckland’s towering skyscrapers.

This is the Auckland Sky Tower, and at 328 metres high, it is the tallest structure in the Southern Hemisphere. Today, I just so happen to be standing only a couple of metres from the top. Luckily, I won’t be doing any jumping this time (you can do a Sky Jump for $225, skywalk.co.nz), I’m just nipping out for a quick stroll along the clouds, courtesy of the Sky Walk ($145). Although I can’t help thinking that a greenie, if launched from this peak position, would catapult to the ground at the destructive rate of 150km/hr…

The wind is puffing harder than a fat man on a stair master, but a harness tethering me to the side of the building provides some comfort. I will not fall. Repeat.
I will not fall.

Confidence restored, I take in the view: I can see as far north as the Leigh Peninsula, east towards Hauraki Gulf, west to Manukau Heads and south to the Bombay Hills. Indeed, you can’t beat the view from all the way up here.

Imagine sliding, jumping, abseiling and falling into rock pools in some of the most magnificent rainforests – it’s like a playground for adults. You spend the day sliding down natural hydro slides, abseiling down mystical waterfalls and getting some airtime with the awesome jumps into deep crystal-clear pools. The Sleeping God Canyon tour offers a vertical descent of more than 300m down a steep set of waterfalls. Eek! Tours cost $360, canyonz.co.nz

Jet boating in Viaduct Harbour, in the heart of down town Auckland, is an adventure combining high-speed thrills with jet boat manoeuvres. These include 180 and 270° spins with sweeping turns, as you travel up to an exhilarating 85km per hour. If you’re quick on the eye, you’ll get amazing views of the Auckland city skyline. Tours from $85, or you can combine your jet boat ride with a quad biking session for $210, a bungy jump for $210, or a helicopter flight for $280, aucklandjetboattours.co.nz

We reckon Goat Island is the best place to go diving when you’re staying in Auckland. Off the east coast you can snorkel or dive straight from the beach to see snapper, parore, sea urchins, crayfish and stingrays, and if you’re lucky, an orca or two. It’s an hour from the city, trips cost from $110 for divers, or from $80 for snorkellers, goatislanddive.co.nz

Using just some light nylon and string, paragliding is as close as you’ll get to flying like a bird, soaring up to 10,000 feet above the earth. Sky Wings will take you paragliding any day of the week (weather permitting) and will pick you up from the city centre. Experiences from $110, nzparagliding.com

Sport view: With new chairman Greg Dyke, it’s time for the FA to stop the rot and get its game face on