The best things to do in London over the August bank Holiday Weekend.

If it’s a hot one this bank holiday weekend, don your cozzie and cool off in Hyde Park’s Serpentine Lido (outdoor swimming pool). Inflatable lilos optional.

Why leave London for a festival when Shoreditch is having its very own street party? Courtesy of The Book Club, there’ll be art installations, dressing up, live bands and DJ sets from the likes of vintage-modern spinners The Correspondents and pop icon Little Boots. There’ll also be all kinds of food from healthy Japanese to good old-fashioned meat, courtesy of The Meat Wagon. And once you’ve stuffed your face and danced your feet off, play musical bingo, check out an exhibition on the tragic muse – think Elizabeth Taylor and Brigitte Bardot – before playing your own tunes (bring your own CDs) at the Bring & Share DIY disco.

Serving Slush Puppie cocktails and decked out with Rubik’s cube tables and Sonic The Hedgehog murals, Maggie’s nightclub in Fulham is all about bringing back the 1980s. True to form, this Bank Holiday, they’re celebrating power dressing with a shoulder pads party, and if yours are the biggest, you’ll win a mystery 80s prize. 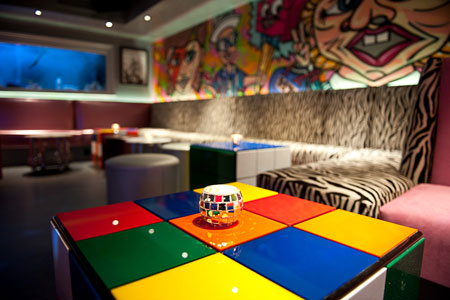 Missing the Edinburgh Fringe this month? Catch the last weekend of Camden’s hilarious version of the Scottish festie, with comedy, theatre and dance acts across the area. Highlights are Guardian Reader at The Camden Head and violent granny shocker Bye Bye Bernie at Etcetera Theatre.

The Aussie bloggers and promoters are presenting a DJ set from a secret guest who shared the bill with Pulp at Wireless.

Venture beyond the Moulin Rouge, Strand

A series of posters by iconic French artist Henri de Toulouse-Lautrec of 1890s Moulin Rouge star Jane Avril. The on-and-off-stage images explore all aspects of her life as an embodiment of bohemian Paris.

Spitalfields
For all your retro homeware, vintage clothes and vinyl needs – plus cabaret, burlesque and vaudeville – hit Judy’s Affordable Vintage Fair in Spitalfields. There’ll be 1940s style cupcakes and tea plus independent sellers and fashion experts touting vintage, re-worked and handmade clothes. While you won’t find the clothes on the high street, you also won’t find the prices there either. Organisers pledge that customers will pay up to 75 per cent less.

Party at the beach

West End
Didn’t book that beach getaway? Party with Caribbean sand between your toes just around the corner from Oxford Circus at Zebrano’s Love Island – because they’ve shipped in five tonnes of the stuff to make the place look like a tropical island. There’ll also be a BBQ and bucket cocktails aplenty.

Brush up on your pop culture and end the bank holiday on a high note by winning the Rough Trade pub quiz at The Lexington.

If you like South American partying but fancy something different, as an alternative to the crowds of Notting Hill Carnival, celebrate the Brazilian contingent in the West End. With breathtaking circus performers and some of South America and Europe’s leading live music artists and DJs (DJ D.Vyzor, Paraisso and DJ T), this is set to be a great big Brazilian-flavoured evening. Also catch some spectacular Capoeira – a martial arts influenced dance form known for its power kicks and fast leg sweeps. Tickets are usually a tenner but if you arrive before 8pm, entry is free. Now that’s something to shake your tail feather to.

Friday nights are late nights at the V&A, so not only will you be able to check out the exhibitions without pushing through the daytime crowds, you can do it with a drink in your hand. This Friday, the people at Bombay Sapphire are bringing their imagination bar, serving creative gin cocktails with ingredients like foam and almonds.

Watch or get involved in workshops outside The South London Gallery, with improvised performances inspired by architecture, dance and film.

Dance until dawn with US duo The Martinez Brothers, spinning house and techno alongside Alex Jones and Cedric Maison, brought to you by London label, Hypercolour.

Around the world in 80 days, London Bridge

See where the Queen chills out, with a sneak peek into The State Rooms. You’ll see some seriously lavish furniture, priceless paintings and exquisite sculpture, plus Kate’s much-hyped wedding dress up close.

House and techno fans won’t want to be left out of this one – held in a secret location (duh), Secretsundaze will dish out their brand of beats on both Saturday and Sunday, to celebrate 10 years of their legendary London parties. The line-up includes Underground Resistance veteran Rolando and Detroit’s Moodyman. Who said you had to wait until nighttime to dance?

The Thames on a speed boat

In what might be the last glimmer of sunshine this summer, hurtle down the Thames James Bond-style on a speedboat. Boats leave hourly, seven days a week and comedian guides provide the banter as you speed past MI5, down to Canary Wharf and back, spotting the big landmarks. This has to be the best way to travel on The Thames.

Obama calls on Syrian president Assad to step down