Aussie adventure: One night in Katherine

Well, when you were in Paris, did you make your own wine, learn about Gustave Eiffel and hang out with some burlesque dancers? Probably not. I did all of those things – in the Northern Territory sense of course. My two-day tour was gorge-less but nonetheless, gorge-ess. Poetry lessons were not included. Setting out early from our campsite, we hiked over an escarpment and into Edith Falls.

These waterfalls are located on the western boundary of Katherine Gorge. The walking trail is steep and takes about 45 minutes but as you near the top you can hear the roar of the waterfalls, beckoning you closer and closer. The waterfalls are spectacular, what they lack in height they make up for in power. The gushing water flows into rock pools where you can swim and, after a two-kilometre walk, there is nothing more enticing.

If you can manage to swim your way up to the brunt of the waterfall, cascading over the red rock, you’ll be pushed along by the rapids. In fact the whole experience is like a natural amusement park. This is nature’s Splash Mountain. Back in the centre of Katherine we are taken to a genuinely Australian restaurant, it’s outdoor and amongst the gum trees. Here we meet chef Geoff “Marksy” Mark, who entertains guests as he cooks at his Stockmans’ Camp Tucker Night.

On the lunch menu, Marksy makes barramundi with lemon myrtle, traditional gem scones, and buffalo burgers. Served with jugs of “jungle juice”, which he says will give us a natural high. The floating green particles in the drink could at least give you a placebo effect I suppose. As we’re eating, Marksy tells us how he fools tourists by telling them he knows the first names of all the wallabies in his paddock.

“I shout out ‘Barry!’ and sure enough, one of them will pop its head up,” he says with a grin. He tells these jokes with impeccable timing like an outback stand-up comic. The whole place is like a museum with campfire equipment and utensils hanging beneath the trees; petrol pumps that don’t have electronic meters and ancient Australian road signs that aren’t there for ironic novelty factor. 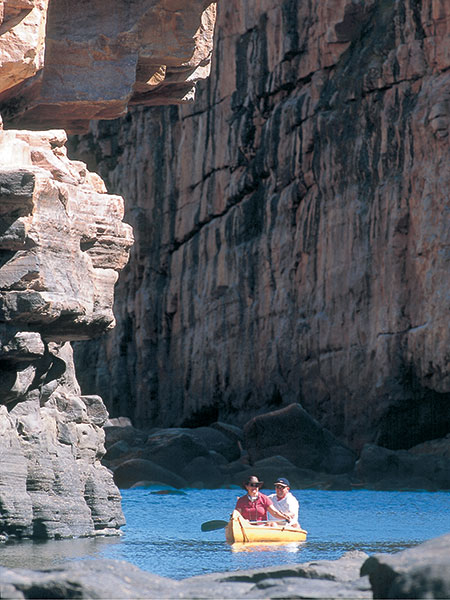 Next door is Katherine Museum which houses the original Gypsy Moth plane that Dr Clyde Fenton flew in the 1930s. Clyde is a bit of a legend because he was not only the first flying doctor but he was the only doctor who was also a pilot.

The Royal Flying Doctor Service didn’t want their doctors to be pilots too. Their men should be skilled in one skill or the other, not both (don’t even get them started on John Travolta). So he put himself through pilot school and bought his own plane. He would often fly without any navigation equipment or charts, and sometimes even without proper landing strips.

The museum itself is largely a tribute to the devastating floods that hit in almost every (recorded) decade. It’s amazing to think that there could even be floods in such a dry land. But the Katherine River runs through the north of the town and when it floods, it really floods. Chills are sent down my spine as I read the accounts of people who lost their homes and everything they owned in the flooding. I

‘m watching the news reports on the museum’s TV screens, reports that I had probably seen at the time, but had seemed so far away and simply washed over me. Now I am struggling to understand the helplessness these people must have felt. Talk about a jungle juice come-down.

Whilst the women on the tour fuss over the kangaroo scrotum keyrings in the gift shop at Katherine’s Top Didj, I walk outside to discover a bunch of people painting, led by an old Aboriginal man. Manual, as he introduces himself, is the resident artist, guide and basically a living legend who is there to answer questions about indigenous culture. He’s so placid and friendly as he teaches us about Raark painting, or crosshatching as it’s known, a technique that requires painting many parallel lines.

The host at Top Didj emerges encouraging the artists to paint a traditional Australian animal like a platypus or a kangaroo, or as she adds, “sometimes the German’s like to paint a stein of beer”. Next we are shown the art of fire lighting by Manual. I don’t know about you, but as a pyromaniac kid, I was always trying to light fires by rubbing sticks together and it would never work.

Manual gets out his special stick that has been passed down from his father. Aha, that’s it! My backyard sticks weren’t special enough. Manual rubs the stick in the palm of his hands causing friction with the other stick, but no flame. He tells us that it won’t light until we all believe in it. 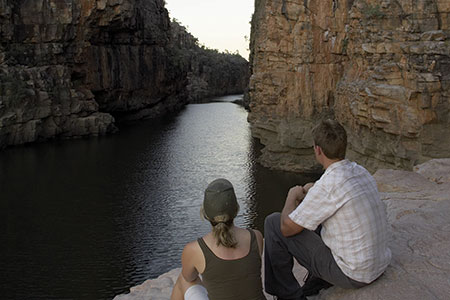 The host jumps in explaining that if there’s even one non-believer in the group, there will be no flame. I look guilty and decide to throw skepticism to the wind – low and behold- we have smoke. Another factor of life for the Aboriginal people is hunting for food. Manual grabs his spear and takes us to a field. Luckily we’re practicing on a fake kangaroo target, which he effortlessly hits.

The rest of the group struggle to even launch the spear from the woomera (the spear thrower and kind of like an extension of your arm). Some laughs are had, but the intact kangaroo ultimately has the last laugh.

We spend the night at Katherine’s Springvale homestead, which was built in 1879, making it the oldest original homestead in the Northern Territory. We pitch our own tents and everybody makes sure they are as far away from the banks of the Katherine River as they can get. Our guide bravely puts his tent nearest the water as he tells us of crocs who like to wander onto shore.

You never really know when someone is joking in the Northern Territory, so I plan on getting comfortably drunk that evening. I’m not alone on this venture. As a fire is started in a barrel (using matches, did we learn anything?) we proceed to drink beers until they run out.

Then it’s onto goon in beer bottles (“just pretend it’s cider, okay?”) and we tell ghost stories late into the night. I’m so fearful that I’m sleeping in the croc’s living room that I’m throwing back the goon like it’s water. At one point I get up and fall backwards into the fire, the barrel breaks my fall but my leg is completely scalded. The only thing to do, as someone suggests, is to go skinny-dipping.

Thankfully they mean in the campsite swimming pool, not the river, and a group of us run over, throwing clothes off and jumping in with our bottles of “cider”. Of course this wakes up the older campers who consequently remove us from the pool. Our guide, fearful that he will be reported, holds his breath under water until they go. The next day he pretends he has no idea about the late night skinny-dip.

A resident of Springvale informs me of the crocs who sometimes venture into the swimming pool and I count my blessings as I pack up my tent. Sure, I didn’t get to go swimming in Katherine Gorge, but I can say I’ve learnt a lot, taken a midnight dip in a crocodile’s wading pool, made my own liquor, almost got a guide fired, learnt how to start a fire and set my leg alight. All in 24 hours in Katherine.

The details: Alex travelled around Katherine with Adventure Tours (Freephone: 1800 068 886)