The World Champion boxer, model and former water skier refused to leave when asked by bar staff prompting them to call the police.

Detective Inspector Shane Woolbank from Miranda police told The Sydney Morning Herald that Eagle “contentiously” argued with police when they were called to the hotel about 8.45pm.

“Officers from the Miranda Local Area Command attended where the 25-year-old woman from Peakhurst allegedly argued with them and contentiously refused to leave,” Inspector Woolbank said.

He refused to comment on whether Eagle had been drinking before her arrest. 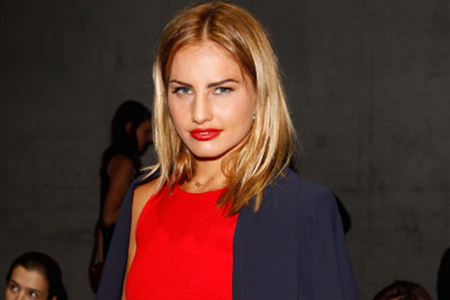 In model mode at a fashion show in April

Eagle’s management confirmed the incident in a statement issued to news.com.au.

“Ms Eagle is deeply upset at the events which occurred thereafter and the conduct of the bouncers involved,” the statement reads.

“The police were called, and Lauryn was taken to the station where she was issued with a fine after an allegation was made that she had refused to leave the Northies premises.

“Lauryn vehemently denies that she was ever asked to leave the premises and will be disputing the matter.”