It was the first time since the Thirties that England had used just two bowlers to dismiss an entire batting line up.

Things looked finely balanced going into the fourth morning of the first test. The Lord’s crowd shuffled in expecting a result, but no one could have foreseen one so emphatic.

Stuart Broad finished with seven wickets for forty four runs, a performance that showed the destructive potential of his inconsistent talent.

Conversely the ever-reliable Jimmy Anderson was on hand to hoover up the remaining wickets.

Kiwis in the crowd could justifiably have felt bullish about their chances at the start of their second innings, if the first class Peter Fulton or swashbuckling Hamish Rutherford could build a score, there was little reason they couldn’t go on to win the test.

Fulton was the first to fall, prodding uncharacteristically at a dangling delivery well outside the off-stump, sending the comfortable edge through to Matt Prior.

Rutherford soon followed him, the fired up Broad sending his off stump somersaulting. 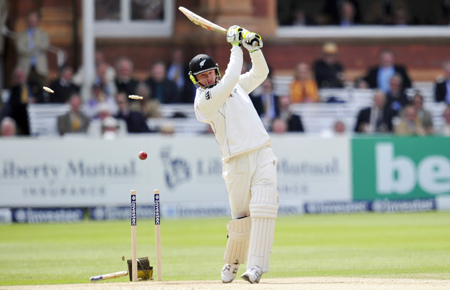 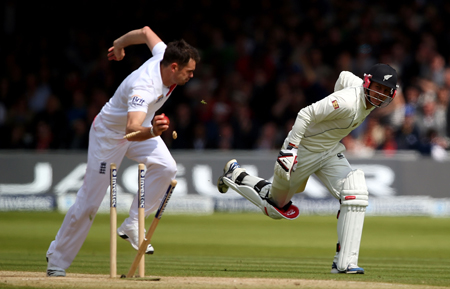 The procession continued after Broad Captain Alastair Cook took a terrific catch at first slip from a the dipping edge from the dangerous Ross Taylor.

Steve Finn took a comfortable catch at cover from Broad to dismiss Kane Williamson before, Cook was on hand again to take another edge from perhaps the ball of the innings from Anderson, sending Dean Brownlie scurrying back to the pavilion.

BJ Watling and Neil Wagner provided some resistance down the order, with Wagner crashing a pulled six over Billy Root, for the first maximum of the test. 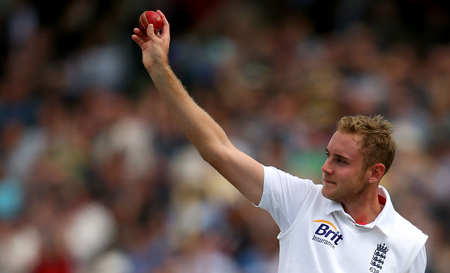 The test ended in fittingly preposterous fashion after Wagner top edged an Anderson delivery, only for Root, charging in to drop the catch, the ball found its way back to the Anderson and two batsman apparently in stasis between the stumps, the Lancashire man duly whipped the bails off and claimed victory for England.

The silver lining for the Black Caps is that they can and should write off Sunday’s events as the kind of aberration that are prone to happen in cricket.