When did you get involved with the movie A Few Best Men?

I’d lived in the UK for 14 years and had just moved back to Sydney when the script found its way to my desk.

But it was set in England when I got it, so I relocated it to Australia, which was a good chance for me to have a go at the English and also the Australians.

We like to show ourselves as the nice guys next door, but don’t often portray the other side of Australia, which is wealth – there is a lot of money in Australia, a lot of people with nice houses and clean teeth.

Was it fun making a comedy when a lot of contemporary Australian cinema is quite bleak?

Yeah, I deliberately went against it – have you seen Snowtown? It is an amazing movie, but I wanted to kill myself at the end of it. At that time, the world was just falling apart and I thought, ‘Can we try and cheer it up?’.

One of the rules on set was we are here to have a good time, and it worked like a treat.

Was there a lot of improvisation?

I usually stick to the script, but because I didn’t write this, I found it difficult.

For the last take of the day, I let the cast do what they want, but I didn’t realise the whole history with [stars] Kris Marshall and Kevin Bishop, who had worked  together since they were kids – once they went off, they were unstoppable!

As I learnt working with Robin Williams, the best way to deal with them was to just let them tire themselves out.

Did you have to persuade Olivia Newton John to star in the film?

I have known her for a long time and wanted to find something for us to work on.

The role had been written as an uptight mother-in-law, so I twisted it round to make her the one that drinks too much, takes too many drugs and loses control.

When I gave it to her, she nearly died. She said: “You have got to be kidding? This goes against everything that I stand for!”

Did you shoot in London as well?

Lots of it is set in London, but it was actually shot in Sydney. Under the Harbour Bridge there is a lot of architecture from the same period, but we had to block the sun out and make it look like it was raining.

Months after we’d finished the film, I was in London while the boys were re-recording their voices. I gave them their clothes and said: “Go stand in Piccadilly Circus and hail a cab.”

So there’s one shot that was filmed in the UK. It was the summer, though, so we had to shoot at 3am when the sun was coming up, but I forgot about the 300 drunk shirtless people wandering around the city!

I skied off the French alps and broke my back, pelvis and legs. I shouldn’t still be here, basically. I was told I wasn’t going to live, then that I was not going to walk.

It was pretty bad, to the point where I just pulled out of the world for a while. It took me three years to learn to walk again. But thank god for morphine, that is all I can say. 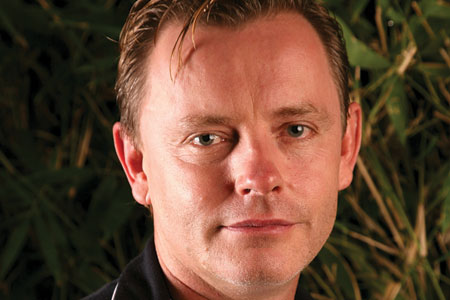 What have you been up to lately?

I have turned into a reality TV show judge. Somebody offered me a gig I thought would be fun – they wanted me to be the bad guy and Jason Donovan, who’s also on the show, to be the good guy – but it turned out the other way.

Does being the good guy come more naturally for you?

As a director, people don’t know what you do for a living. When people see me, I’m doing press, and being a loudmouth, but my job is working with people.

They wanted me to scream and shout, but I said: ‘I don’t work like that.’

You came out earlier this year. Why is legalising gay marriage not as high on the agenda in Australia as elsewhere?

It is such a complicated one. I have been with my partner for 20 years and we got a civil union in the UK about five years ago.

The Australians are very, very open-minded people, but underneath there’s a conservatism that has emerged in the past few years.

I don’t think it’s going to happen for the next two to three governments.

I was the world’s first wedding-ographer [Elliott filmed weddings from the age of 13] so I have done about 3000 of the fuckers!

My favourite has to be the one where the mother was taking control and making every decision.

Her daughter was in tears the day before and said: “Mum, it’s not your wedding”, which I used in the movie.

But the next day the mother got out of the car behind the bride in exactly the same outfit.

This poor girl walked down the aisle sobbing as her mother walked ahead of her in the same wedding dress!

A Few Best Men. Out Aug 31 via Buena Vista

Win a private screening of A Few Best Men for you and your mates. Click here for details.