Jordan Rice, the Australian teenager who died in the floods after telling rescuers to save his brother first, was mourned today at a funeral Toowoomba.

Mourners gathered to pay their respects to the 13-year-old national hero who became a symbol of Australia’s flood tragedy.

Jordan’s mother, Donna, was also killed when the pair were swept from the roof of their car.

Jordan and Donna Rice’s coffins were placed in the same grave at the Drayton and Toowoomba cemetery.

Jordan’s father John Tyson spoke at the ceremony and described his devastation at losing both his wife and son.

“I don’t think I can put into words just how much I’ll miss them,” Tyson said.

“The fire in my heart will continue to burn until my time comes to join them. But until then, all I can do is think of you both and tell anyone who’ll listen just how much I love you both and how special you are. God speed, my little angels.” 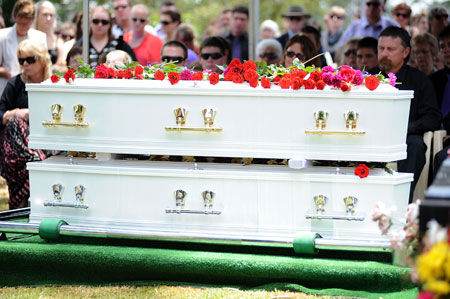 Jordan’s 22-year-old brother Chris Rice told the mourners how proud he was of his little brother.

“You were so shy, always hanging off Mum,” he said. “You were petrified of water, heights and even the dark. How wrong was I – here you go losing your life from one of your biggest fears to save your little brother.

“You made me so proud. What you did took heart, courage and love. You’re my little hero. I love you Weedsy.”

The caskets were carried to the grave to the strains of Eric Clapton’s Tears in Heaven and then Cat Stevens’ Father and Son. Dozens of balloons were released as Jordan and Donna Rice were buried.

Cost of living in USA

Claustrophilia: Where visitors to Budapest pay to be locked in a room