The challenge to cigarette plain packaging by four tobacco companies is continuing in the High Court on Wednesday.

Under federal government laws, all cigarettes and tobacco products will have to be sold in drab olive-brown packs from December.

Large graphic health warnings will dominate the packs, and manufacturers’ brand names like Camel or Winfield Blue will be written in small generic font.

Big tobacco’s legal representatives are arguing that by assuming control of what goes on the packs, the Commonwealth is effectively acquiring their intellectual property. 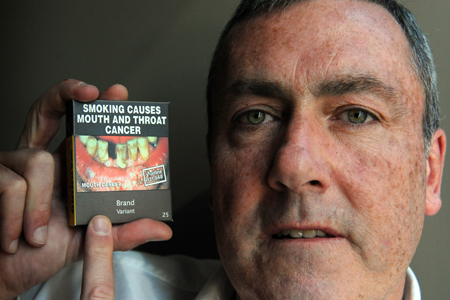 “They are certainly not using it for any personal benefit, they are just restricting its use,” he told ABC radio on Wednesday.

“My understanding is that there is grounds for that…”

While the matter would ultimately be determined by the High Court, Prof Hammond believes the federal government is “on very firm footing with respect to the constitutional challenge and international trade law”.

If the federal government wins the case, he maintains few people under the age of 20 will take up smoking.

“Marketing and its impact among young people is critically important and this really cuts to the heart of that,” he said.

“We know for a fact that removing pack branding reduces appeal among young people.”

The High Court hearing is expected to run until Thursday with a judgment due by mid-year.

On Wednesday, lawyers for the federal government will defend the cigarette plain packaging legislation.

Gary the goat has conviction for flower munching quashed