Bullet holes and bomb damage in cities and villages across the country serve as a reminder of the war that killed 100,000 people and displaced 2.2 million.

But despite the deep-seated scars of battle and genocide, Bosnia has managed to retain plenty of natural beauty and charm.

The historic capital, with its unique mix of Eastern and Western culture, contains stories that will make your jaw drop.

And, as for the countryside, its lush green mountains and clear rivers make it the perfect destination for sporty adventures on a seven-day road trip.

While many tourists head straight for the Plitvice waterfalls, those in the know say that the best cascading whitewater experience in Bosnia is at the Kravica Waterfalls.

This southern spot in the Herzevgovinian part of the country (it’s officially Bosnia-Herzegovina), has rapids, a natural plunge pool and a waterside bar where you can sit in the shade with a beer and a barbecue lunch.

It’s a baking hot day when I visit, but after dipping an exploratory toe in the water, I’m decidedly chilly. Even so, the braver members of our group dive straight in (before shrieking), but I make no secret of being a wuss when it comes to freezing water – and what might be lurking in it.

And anyway, lying on the banks under the sun and the cooling spray is far from a bad deal.

When I ask our guide, Mustafa, why he’s not swimming either, he pokes fun at me: “I survived the war, why would I want to swim in there with all the fish?” I’ve just discovered Bosnian humour, and it’s drier than the Sahara. 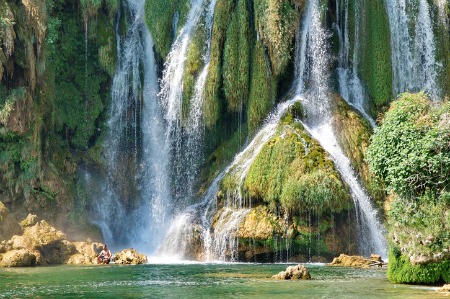 “Want to go to a bar that used to be a Communist cinema?”

That’s not an invitation I receive very often, so I have no intention of turning it down. As soon as our group arrives in the capital, we head to Kino Bosna (Alipasina 19, 71000).

Every Monday, a traditional Bosnian folk band plays on the stage where the screen used to be, while students and locals sit back on old cinema chairs or chat around tables in the middle.

The super-hip venue is part warehouse rave, part museum. Pictures of old movie stars line the walls, mostly from black-and-white flicks, and there’s also a rogue shot of Sacha Baron Cohen as Borat – but it’s still in black and white, of course.

The beers are some of the cheapest in the city, and we’re drinking our new favourite, Sarajevska, which costs only about £1.50 a pop. In every box of the brown-bottled, light beer, there’s one green bottle that’s supposed to be lucky, so we’re keeping our eyes peeled.

Before long, the band members are jumping off the stage to serenade the crowd, who are singing along at full blast – it’s a wonderfully chaotic night out that proves Sarajevo’s taste for a rollicking good time.

Sore heads are soothed by a hearty hostel breakfast the next morning, and then it’s time to find out about Sarajevo’s vast and complicated history. 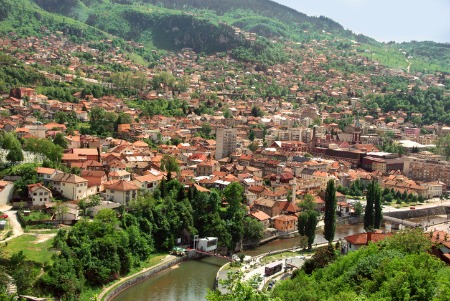 The city’s name means “castle in the field”, but now, “mountains around a city” would be a more apt appellation – Sarajevo sprawls right up to the feet, and sometimes halfway up, of its surrounding mountains.

A walk around the city shows very different cultural influences – you can hear the Muslim call to prayer and
the bells from Christian churches at the same time. The Old Town’s cobbled streets, Persian rug stores and a covered bazaar lie on one side of the city, while on the other are more Westernised buildings and malls.

Of course, Bosnia has struggled under the control of many different powers – the Ottomans, Austria-Hungary, Nazi Germany and Yugoslavia, to name a few. In 1914, when it was under Austro-Hungarian rule, Sarajevo saw the First World War begin with the assassination of Archduke Franz Ferdinand of Austria on the banks of the river Miljacka in the centre of town.

Mustafa was a teenager in Sarajevo during the war.

He remembers hearing foreign news reporters had dubbed one of its streets “Sniper Alley” when Serb soldiers were positioned in the mountains surrounding the city, and thinking: “‘Which one?’ There wasn’t one sniper alley, they were all sniper alleys.”

He takes us past the main market, which was devastated during the war when a shell landed in the middle of it. Sixty-six people were killed and 200 wounded.

Today, life goes on, and unlike other parts of the city that bear bullet holes and bomb damage, there aren’t many signs left of the tragedy here – the market is crammed with people buying their fruit and vegetables.

Shopkeepers in the Old Town have even turned copper bombshells into beautiful ornaments – people have made the best of what life has delivered.

Cool cafes and coffee houses are the big new trend. Seek out Mash (Branilaca Sarajeva, Bascarsija), which often remains open until past midnight.

Or there’s Morica Han (Saraci 49 Sarajevo, Bascarsija) in the Old Town, which serves some of the best Bosnian coffee (it’s as strong and dark as the Turkish stuff) around.

Just opposite is Ulica Bravadziluk, which Mustafa tells me makes the tastiest burek around.

He eats one of these local fried pastry pies at least every other day from various counters across the city, so I’m confident he’s more than qualified to judge.

A short drive out of the bustle are the war tunnels, built to provide an alternative route out of sniper-surrounded Sarajevo, when the airport was controlled by the UN. 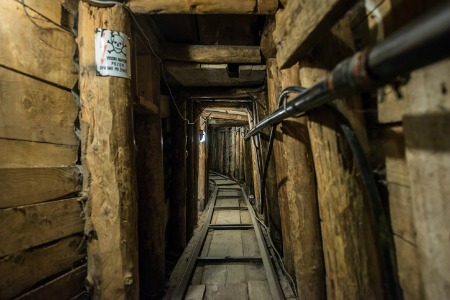 The onsite museum tells the survival stories of those who braved a journey through the narrow passages to pick up food and supplies.

Visitors can venture through one section; after hearing how many people badly bashed their foreheads on the wood and steel beams while walking through the dark, we’re super-careful.

Out of the city and into unspoilt countryside, we’re back on the road to Konjic for some whitewater rafting in the mountains. It snowed a couple of days ago, so the water is extra cold.

I knock back a few shots of rakija – the local spirit smells a little bit like paint stripper, but I’ve developed a taste for it.

Then I’m wetsuited up, on the raft and not feeling the cold quite so much.

After a relaxed drift, the river starts to narrow and our guide shouts from the helm: “Everybody paddle!” We cut our oars into the white river as the waves splash up into our faces.

It’s freezing, but the adrenaline makes up for it, and every time we pass another section of rapids the buzz grows and the waves get bigger.

When we reach the local house that’s our destination, an enormous lunchtime feast of hearty Bosnian soups, beef-stuffed peppers and roast potatoes is waiting for us.

On the drive back down south, we explore Blagaj City, the site of a pretty, powerful spring, where fresh water shoots from a cave at 330 litres per second.

It’s the home of Tekija, a Muslim monastery, also known as Blagaj Tekke, or Dervish House. The three floors of the 15th-century house are stacked on top of each other and jut from the rocks right next to the gushing water source.

We cover up with headscarves to go inside, where the floors are covered with Persian rugs and the ceilings are ornately decorated. 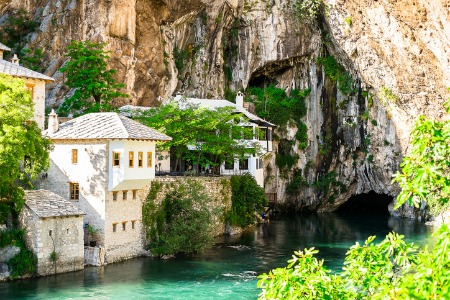 In the bathroom, stars are cut into the dome-shaped roof – you can see the cliffs from below and rain can stream in from above.

Blagaj is also famous for its freshwater trout, fished from waters just downstream. So we settle in on a restaurant terrace opposite as the blue water gushes past for a meal of trout stuffed with Mediterranean vegetables.

True to Bosnia’s generous culinary form not one, but two of the tastiest trout I’ve ever had come out on my plate ten minutes later. It’s at this point we realise we’re all going to leave a stone heavier.

Our last stop is this dark mountainside cave, which is 700m  long and close to the border with Croatia.

“The people who lived in here had the earliest form of air conditioning,” jokes our guide. It is a wind tunnel, and stays at 10ºC all year round.

Inside, stalagmites, stalactites and other swirling, gnarled and smooth rock formations hang from the walls. The floor is pretty slippery, but we’re happily checking out the caves until our guide stops to tell us a leopard’s skeleton was found just next to where we’re standing.

Looking nervously back into the darkness, we hurry on, until we reach a calm, sheltered lake which is home to the slithery human fish – a blind amphibian named so for its fingers and pinky skin. Yick.

This cave certainly isn’t somewhere I’d like to get stuck, but outside in the open air, surrounded by the towering green mountains and brilliant Herzegovinian sunshine – well, that’s a different matter entirely. 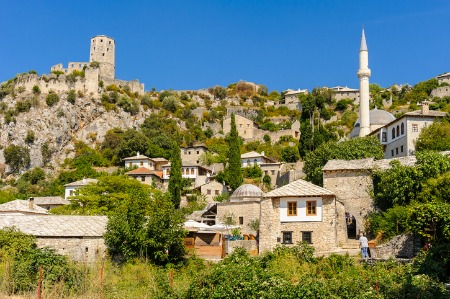 A UNESCO-protected fortified Turkish town nestled on the side of a cliff. Hike up to the top for awesome views.

These grassy structures – one with four perfectly shaped slopes pointing up – are thought by some archaeologists to be the oldest in the world.

In 1995, 8000 Bosnian Muslims were killed by Serb forces at Srebrenica in a massacre that pushed the UN to end the war. Pay your respects at the memorial.

Bosnia’s second city is surrounded by mountains, gets plenty of sun and has an East-meets-West vibe, with mosques, bars, Austro-Hungarian buildings and an Ottoman old town.

Best for … a hell of a view: Lukomir

Make the 1469m trek up to Bosnia’s highest village. In the mountains outside Sarajevo, its residents follow a traditional way of life.

Free entry if you pre-register

Man-made wonders: five of the best

Death of the “long summer holiday”

STI tests not a priority for couples