Obama met with the Myanmar leader at her home, where she was held under house arrest for almost 15 years, along with Secretary of State Hilary Clinton.

Obama made a speech at Yangon University during which he spoke of the progress the country had made and urged it not to allow the “flickers of progress” it had made to be relinquished, as well as talking of how country’s “remarkable journey has just begun”.

The United States lifted a decade-long ban on Burmese imports ahead of the president’s trip, which comes just two weeks after his re-election.

Obama also visited the Shwedagon Pagoda, the spiritual home of Burmese Buddhism on his three day tour to South East Asia which also includes a visit to Cambodia and Thailand ahead of Obama’s involvement at the Association of South East Asian Nations in Cambodia, which will also include leaders from Japan, China and Russia. 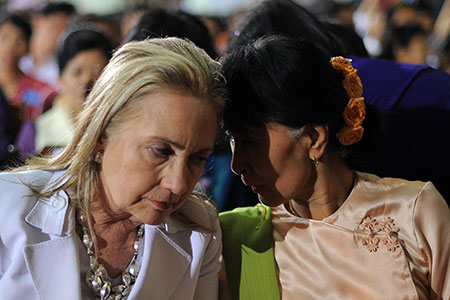