Half-naked, feathered, sequined bodies have acquired a layer of sweat and dust. As the crowd grinds and pulses its way along the road, the odd tassel or headdress is shed and trampled underfoot. The crowd glows with rum and euphoria. I’m allowing myself to be swept through Bridgetown Market on the final day of Crop Over, Barbados’s spectacular annual festival.

This is Grand Kadooment, a word as enjoyable as the event it describes. Kadooment means, in Bajan, “a big to-do”. And a big to-do it is, one that has been getting steadily wilder since it kicked off this morning.

Kadooment is about creating a spectacle and months of preparation have gone into the competitively flamboyant costumes. Anyone can sign up to “jump” with a band, elevating them to the status of carnival participant proper, with dancing space behind a music float and a drinks truck on hand. If you’ve got the stamina and can rock a spangly outfit, then do it. 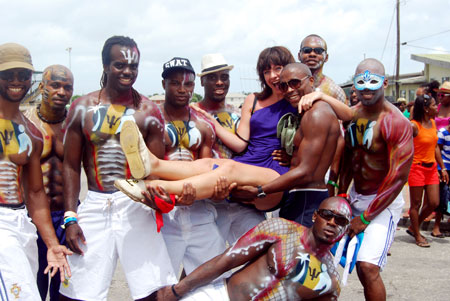 I haven’t signed up with a band so join the less-colourful, but equally enthusiastic, onlookers who line the streets.

I’m in no danger of feeling left out; Bajan people are friendly – so friendly that I am swept into the air by a group of buff, body-painted guys who happen to pass by. This, dear reader, is a very good moment for me.

We travel with the costumed bands from the National Stadium to Spring Garden Highway, where everyone will finally congregate to collapse.

The day starts early and we find a spot on a grass bank near the judges’ tent. Each band parades through to be scored on their costumes and this is the comparatively ordered part of the day. Before the haze of alcohol and elated ikini-clad bodies jump past – by the end of the day their moves seriously raunchy as couples grind and girls booty-shake. The costumes are works of art, some held aloft on poles or gliding on wheels, needing several metres berth to move. The sheer amount of work involved is seriously impressive.

Soca, the musical child of soul and calypso, is the soundtrack of Crop Over and, for months, soca exponents have battled it out to be crowned Calypso Monarch, Party Monarch or Sweet Soca Monarch. 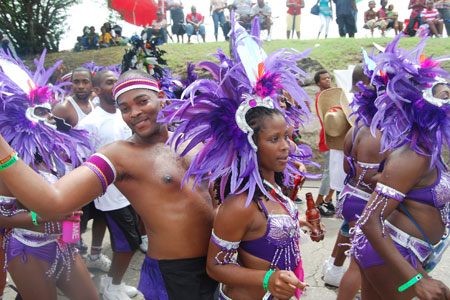 The Friday before Kadooment, Pic-O-De-Crop launches a four-day party marathon that is the climax of several months’ festivities. Fans pack the Kensington Oval stadium to watch the high-energy, often- political soca artists compete for the coveted crowns. Pic-o-de-crop finishes at 1am but that’s not a licence to head to bed. Foreday Morning, one of Crop Over’s biggest parties, limbers up and the streets fill with revellers who, by 6am when the party ends, will be covered in mud and paint.

It takes energy to get through Crop Over; after Foreday Morning, there’s still Cohobblopot – a stadium display of the costumed bands – before you reach the prize that is Grand Kadooment. But in Barbados, Crop Over is bigger than Christmas, so the island puts work on the back burner and expects a sore head this week.

There’s a beach nearby and the sand is soon littered with discarded tassels and empty beer cans while the ocean fills with slightly battered carnival folk. On the streets nearby, soca anthems blare out and, now the bands have dispersed, the fish-folk dance with the iries, and onlookers mix with the costumed dancers.

Rum in hand, I’m definitely part of Kadooment now. I’ve even acquired some smudges of body-paint to prove it.

The history of Crop Over

Crop Over began in the 19th Century when slaves celebrated the end of harvest on the sugar plantations. The earliest mention of the festival was by the manager of Newton Plantation, who wrote in 1788 that he was arranging “a dinner and sober dance” for his slaves. Emancipation came but the festival endured. Free from oppression, ‘harvest time’ became ‘Crop Over’ and the sober dance metamorphosed into something far more fun. 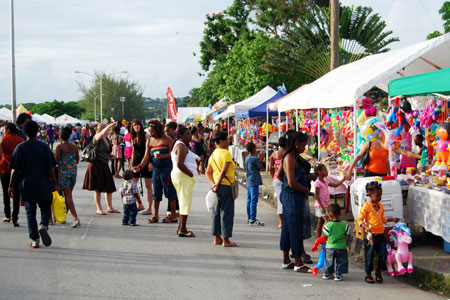 Beaches
Between the Atlantic and Caribbean oceans, Barbados has a markedly different coastline on either side. The southwest, Atlantic side of the island is undeveloped and unspoiled. For postcard-like perfection, hit Crane Beach, a stretch of white sand overlooked by craggy cliffs. You can reach it from the swanky Crane Beach Hotel and it’s worth spoiling yourself with a drink on the ocean-overlooking veranda before taking the cliff-face lift down for a swim. On the west coast of the island, beaches are long and sandy but may be lined with bars, restaurants and resorts.

Swim with turtles
The island is formed mainly of coral and there are both deep and shallow reefs abundant with bright coral and exotic fish. Here you can swim with hawksbill and leatherback turtles in the wild. These graceful creatures were once endangered but, in some monitored areas, have become comfortable enough with humans to make it possible to swim with them.

George Washington house
The house where America’s first president, a slave-owner himself, once stayed has been reconstructed to show how the moneyed classes once lived. Wine-cooling rooms and four-poster beds testify to a cushy existence. which makes the collection of manacles, chains and barbed neck collars which were used as a form of restraint on the slaves all the more shocking.

Nightlife
If you’re not partied out after Crop Over, hang with the locals on Baxters Road, Bridgetown, where you can drink until late. Bars are ramshackle, fun and friendly. St Lawrence Gap is a busy but laidback strip of bars, restaurants and clubs on the south coast. You’ll find karaoke, reggae and jazz bars all within a short block. Eat at Pisces restaurant overlooking the sea and watch the reflection of the lights twinkling.

On Friday night, Oistins is the place to be. An area of the town comes to life as all kinds of fish are fried up at wooden stalls and served with sweet potato, macaroni pie or coleslaw. Eat at an outside table, then either dance the night away or simply nurse your beer and watch others shake it. 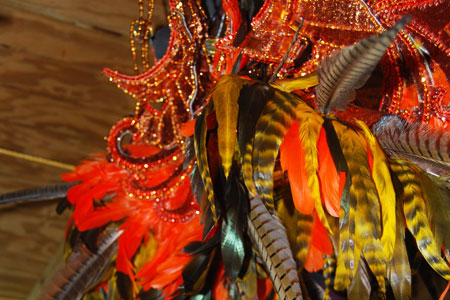 Harrison’s Cave
For total peace and quiet, Harrison’s Cave, with its cool, echoing labyrinth of chambers and tunnels, is your ticket. Fairytale-esque stalactites and stalagmites create shapes that look like people and animals, and in one cave, a 12m waterfall cascades into an emerald pool. A tram will take you through the huge subterranean caverns.

Barbados Wildlife Reserve
Get your camera ready in this haven for Barbados’s most colourful and exotic animals, many of which are endangered. If you’re not a fan of seeing animals in cages, don’t fear – most live freely in the stunning mahogany forest. Expect to meet monkeys, parrots, flamingos, iguanas, turtles and snakes. Get there at the green monkeys’ feeding time for guaranteed entertainment.

Andromeda Botanical Gardens
There are several botanic gardens in Barbados, but Andromeda is hard to beat. On a hillside overlooking the coastline, the gardens showcase a dazzling array of flowers, plants and trees. Don’t miss the ancient, giant bearded fig tree and a hibiscus garden which attracts tiny hummingbirds.

The Scotland District
If you like hiking then visit the island’s Scotland District, so-called by homesick settlers as it supposedly reminded them of their homeland. There are hills, but the resemblance stops there – thanks mainly to the palm-covered slopes, sunshine and distant sparkling ocean. If you’ve danced your legs off, there are several riding schools on the island, so you can hop on a nag to explore.

When to go: Crop Over festivities have already started but the main weekend is from July 29-Aug 1.

Getting there: British Airways and Virgin Atlantic fly direct to Barbados.

Accommodation: Hotel rooms start at £60 a night, but may be more during Crop Over. B&B in a family home from £20 per night. Get a list from visitbarbados.org.

Camilla, Duchess of Cornwall, cuddles Ruby Blue the baby kangaroo during trip Down Under