Barmy barracks: The famed Army of English cricket fans formed when their team was crap – has Ashes success changed them?

It’s a vastly different picture to when the devoted fanbase first formed in 1994-95, and through to the Noughties, when England were largely Australia’s whipping boys. The contrasting results of the eras make no difference to co-founder Paul Burnham.

“It was so normal for the Brits,” says Burnham, 48, who started the Army with mates Dave Peacock and Gareth Evans. “We support our team regardless. It’s always been about looking on the bright side of life and making the most of every little victory – a 50, a hat-trick or a partnership from the tail. The Aussie fans couldn’t understand it. They were so used to winning.” 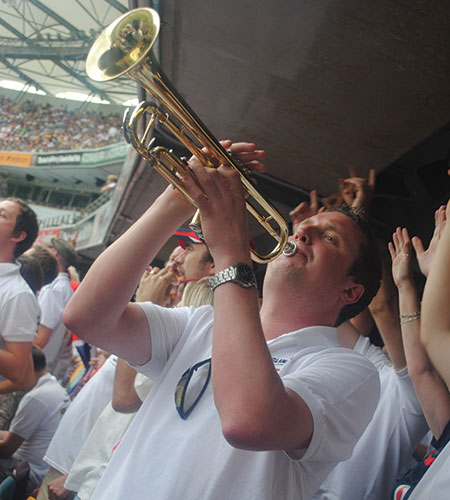 In tune: Billy ‘the Trumpet’ Cooper just wants to add to the atmosphere

The tide turned in 2005 with a two-run win at Edgbaston, which Burnham reckons changed everything. “After then I think England certainly gained a psychological edge,” he says. England could outplay the dominant Aussies.

“I think [the 5-0 whitewash in] 2006-07 would have happened either way, with the amazing side Australia had, but I think in ‘05 we realised that with some positive cricket and the crowd getting behind them, they could be a force. I’ve never known an atmosphere like that – I guess there was something like it in 1981 when [Ian] Botham did his magic, but ‘05 was remarkable for the atmosphere. I will never forget that.”

Whether winning a tight one or getting pasted away from home, the Barmy Army attitude never wavers. “When we go away from an English winter we go to some very nice countries – the subcontinent, Caribbean, Australia. We’ve paid a lot of money to support the team, but wouldn’t let our whole trip be decided by the way they go on the pitch.”

“Everybody’s your favourite. We started supporting a team that was losing and giving 100 per cent, and that’s all we ask of the team, regardless of the result,” he adds. 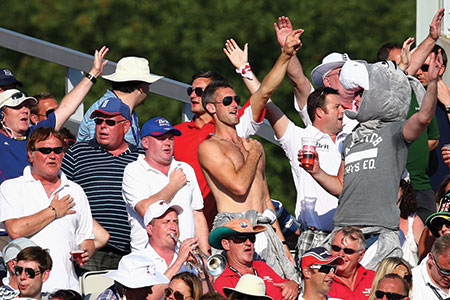 As winners though, and with new blood always arriving as part of what is now a significant business venture as well as a fan facilitating group, some need to be reminded of where the Army comes from. “I get worried about some of the younger guys who are getting too used to England winning, and they’re a bit critical, so we have to remind them what it’s about. On the whole, the Barmy Army ethos is there.”

Their philosophy aside, the Barmies are best remembered by those who’ve shared a ground with them for songs. Their chants of “We’ve got three dollars to the pound” have expired with exchange rates, but they continue to add to their songbook. Unfortunately for them, the best new addition to the repertoire – about Ashton Agar to the tune of Black Lace’s Agadoo – is redundant after the young spinner was dropped and is unlikely to feature at the Oval.

“The songs have got cleverer over time,” Burnham says. “They’re important because no one wants to hear ‘En-ger-land’ any more than they want to hear ‘Aussie Aussie Aussie, Oi Oi Oi’ over and over again. And on tour, six hours a day for five Tests is an awful lot of time to come up with something. I like anything that’s witty, without any swear words in it.”

One member of the group never likely to be heard swearing on crowd cam is Billy ‘the Trumpet’ Cooper. He became a regular fixture when he spotted a Barmy Army member in Antigua with a trumpet he had lost in a taxi in Barbados on England’s tour of the Caribbean in 2004. 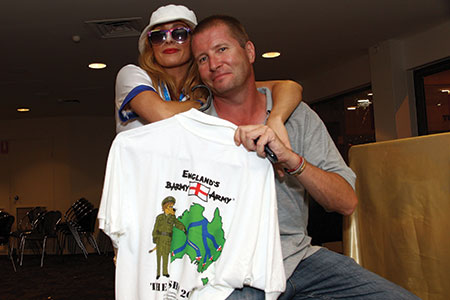 “It was a bit of a novelty one with a blue bell, so I recognised it,” Cooper says. “When I said ‘That’s mine,’ they said, ‘Play us a tune to prove it.’ I played The Great Escape, which is why I always start with that one now. Paul came over and said, ‘That was fantastic, can you come and do it tomorrow?’ And it all went from there.”

Burnham says Cooper’s “an invaluable asset” in getting the crowd going in the same direction. “He’s got comic timing, he’s a very thoughtful guy, Billy,” he says. “He doesn’t rock up pissed playing trumpet, he’s a professional player and takes pride in what he does.”

Controversy rocked the Army when Cooper wasn’t allowed to take his horn into Trent Bridge for the first Test due to “health and safety” concerns, much to the disappointment of Kevin Pietersen, Graeme Swann and Stuart Broad, who were among a chorus of players saying he should be allowed in. And as Burnham says, “the Barmy Army’s not needed at Lord’s”. But at Old Trafford and Chester-le-Street, Billy’s featured heavily. David Warner even praised his choice of the Rocky theme when he came out.

“It’s not about giving a trumpet recital, it’s about adding some variety to the day and helping the singing be a bit more in tune than it might be,” he says. “England crowds like to have a sing-song anyway. There’s nothing wrong with quiet times either, but the times when the energy needs to be picked up a bit present themselves fairly obviously.”

“I’m careful for it not to be all about the trumpet, though. The last thing I’d want is to take anything away from the cricket. That and people having a good time is what matters.” 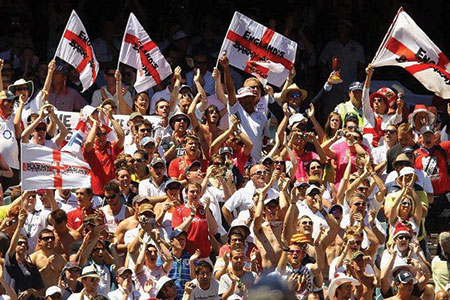 Where’s Billy? The horn among the hordes

Why’s Billy playing that? And other barmy songs

Watching the Ashes at the ground or on TV, you hear familiar tunes but may not have a clue why it’s being played or what the red and whites are singing. Rocky theme: Makes sense when David Warner comes out. Ring Of Fire: He’s Matty Prior, He’s Matty Prior. Only Fools And Horses: For Johnathan Trott. Guess why.

God Save The Queen: They might just be singing the national anthem, or the Aussie specific version, “God save your gracious Queen, long live your noble…”

Rudy: The Specials’ song “A message to you Rooty” for Joe.

My Old Man’s A Dustman: A special occasion when this is sung for Graeme Swann. Features the closing line, “Never cut a spinner or pat a burning dog.”

NRL: Warriors fired up for showdown with Sea Eagles