Basque in the glory of San Sebastian: one of Europe’s top places for surf, food and beaches

There are three things that San Sebastian can reasonably claim to do better than most of Europe: surf, food and beaches.

This jewel of the Basque country, named Donostia in the native tongue, might be home to the proud Catalans – as fiercely passionate about fine food as their separateness from (and superiority to) Spain – but San Sebastian’s ego is borne of a perfectly accurate mirror.

From the continent’s very best city beach on the Bay of Biscay, to the own-brand tapas (pintxos, pronounced ‘pinchos’) that line every bar in town and rival the most haute of cuisine, this northern Spanish beauty has most definitely got it.

As a result, the small city can require a big budget – hotel rooms are in demand and the myriad Michelin fare on offer rarely comes cheap.

But it is possible to indulge in the decadent Donostia’s riches without having to part with too much of your own. First, book early and off-season – or bring a tent.

Second, read on for our guide to a San Sebastian that will suit every taste and leave every bank account balanced. 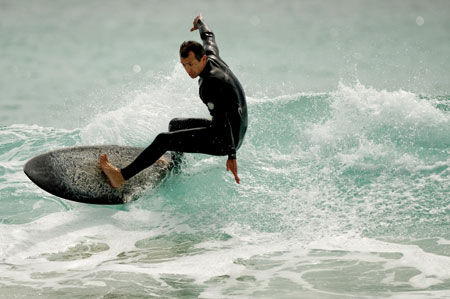 San Sebastian’s beaches border on the comically picturesque. La Concha is widely referred to as Europe’s best city beach,
a golden crescent of gorgeousness smack-bang in the centre of town.

As well as swimming and sunbathing in the shade of historical buildings and churches, with the green peaks of the Pyrenees spreading Francewards in the background (San Sebastian is just 20km from the French border), there is some gentle surf to be had.

For more serious surfers, Zurriola beach is the stuff of legend. A mere hop and a skip from La Concha (you just have to cross over a bridge), the consistent beach break has good peaks and serves up a lefthander at low tide.

The surf school/ surf camp trade is strong here, so if you’re averse to crowds and prefer not to share waves with the odd novice, avoid.

But if a beach break with long sunny days, great views, fast friends and decent surf do it for you, San Sebastian sure is where it’s at.

Top tip: Stoke Travel runs a surf camp in San Sebastian that offers surf lessons, 24-hour board hire, camping and all meals for less than £40 a day. Add on about £4 a day for unlimited beer and sangria. Happy holidays!  stoketravel.com 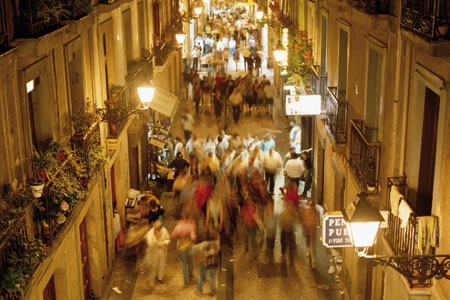 Looking to party? Head into the Parte Vieja, San Sebastian’s characterful old town, which is said to boast more bars than any other neighbourhood in the world.

In typical Spanish style, the nightlife doesn’t really get going until the wee hours, so you shouldn’t hit up your first bar any earlier than 10pm.

Local specialties to look out for are txakoli – a slightly sparkling, pale-green wine best glugged with pintxos – and kalimotxo, a rather odd premise that combines red wine and a cola-based soft drink (hence the reason some call it ‘cocavino’).

It might seem a bit wrong – hell, it’s a lot wrong – but when in Rome and all that. Locally made cider, or sidria, is popular, too.

Top tip: If you’re intent on getting horribly smashed, it’s a local custom to add a shot of Ouzo to your cocavino. It sounds suspiciously akin to pouring sambuca in your snakebite and black down the student union to us. But you’re in the ultra-refined Basque country, so it must be alright. 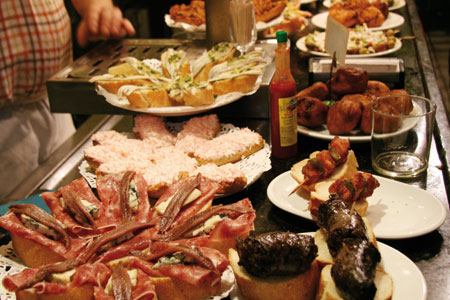 San Sebastian is hog heaven if you’re fussy about food. Though the city is famous for its galaxy of Michelin stars – Arzak, for example, with its three sparklers, has retained its place in the top 10 world’s best restaurants for almost a decade – you can eat top-notch tucker for a fraction of the price at any average-looking bar in San Seb.

Just plough into the scrum at la barra (the bar), where an assortment of pintxos are laid out, and stack them up in a sort of Spanish gastronome’s version of Yo! Sushi.

Some places have their pintxos chalked up on a board, but you can safely play Lucky Dip, because whatever gets served up will be sublime enough to make an alpha male weep.

The best ploy is to embark on a pintxo crawl – so hit up a number of bars and order a dish and a drink at every stop. This way you can try an array of dishes at varying prices.

Top tip: Pintxos generally cost about €3 (about £2) each, but it’s easy to get carried away and let the bill mount up. Decide how much you’re happy on spending before you start, and only take that much cash with you.

The temptation to blow the budget will be too great otherwise – trust us. 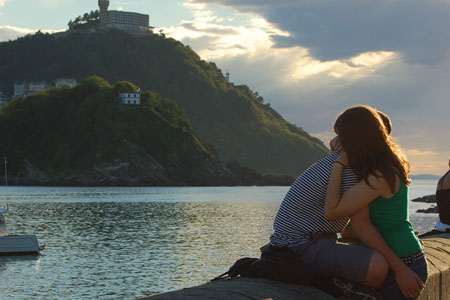 San Sebastian is unabashedly romantic. The scenery – crashing waves on one side, soaring Pyrenees on the other – is made for a sunset. In fact, the whole vibe of the city is an elaborate lead-in to getting busy: sumptuous food, fine wines, beach-based frolics.

We suggest you stroll hand-in-hand up Monte Urgull for incredible views (there’s a path from Plaza de Zuloaga). At the top, get your picture with the giant statue of Christ, then watch the sky’s light dim over the vista.

For the lazier Casanova, take your missus up the funicular (not a euphemism), which starts at Ondaretta beach in the west of town and stops at the top of Monte Igueldo, on the opposite side from Urgull.

Couples can get misty-eyed over yet more heart-lifting views across Concha bay.

Top tip: To really impress, book a session at beachside spa La Perla. Right on La Concha, you can follow up a pamper session with sunbathing. Two hours in the spa costs from £20pp. 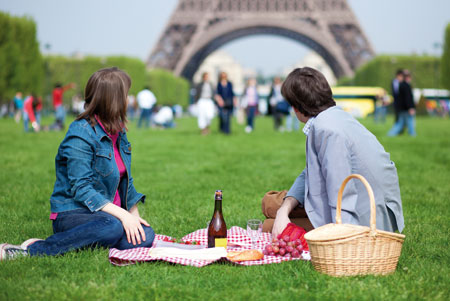 San Sebastian isn’t the only city with a gourmet reputation. Here’s our pick of Europe’s top spots for great grub on the cheap.

Paris
The only European city to equal San Sebastian’s clutch of Michelins, Paris possesses plenty of expensive restaurants. But what’s great about a culture so obsessed with food is that you can pick up high-calibre morsels in any old deli.

Known for being a passionate lot, the Romans lavish this ardour on their cuisine as much as anything else. But while the city’s three-Michelin-star La Pergola restaurant might be on every greedy gourmand’s to-do list, there are plenty of cheap neighbourhood trattorias dishing up pizzas and pastas that’ll stay with you for life.

For a really memorable taste of Rome, seek out Er Buchetto. This three-table hole in the wall serves one dish only – sandwiches stuffed with ecstasy-inducing slowroast pork. Pair with a glass of red for about £3 in all.  erbuchetto.wordpress.com

Chocolate, waffles, buns, frites … Belgium is renowned for its food, and the weight gain it inevitably portends.

Foodies will find a galaxy of Michelins in the capital, but bellies on a budget can be filled at the cavernous Au Stekerlapatte bistro near the Palais de Justice.

This region to the south of San Sebastian is just as crazy about cuisine as its more famous neighbour.

The town of Tolosa hosts the most, including an annual ‘battle of the beans’ to show off the much-hyped Tolosa black bean – best served with Ibarra peppers and blood sausage – and a summer beer festival. Get in. tolosaldea.net

Where in the world? Joanna Barry – Rome, Italy

Want to be a model for editorial, commercial and fashion work?