Get close to bears in Kainuu, Finland – one of Europe’s last wildernesses. TNT’s Janine Kelso hid out in the woods…

A twig snaps in the distance and birds begin to circle ominously overhead. I hold my breath, keeping my eyes peeled for a flash of fur. We are in prime brown bear territory in Kaiunu, Finland’s northern-most region, just 2km from the Russian border.

There are only two inhabitants per square kilometre in Kainuu, which is the size of Belgium. The plan is to spot more bears than people.

The hide in which we’re sitting enjoys a good vantage point in an open wetland area in the middle of a fairytale forest: think bubbling streams, flowing rivers and densely packed spruce and pine trees.

Eight of us are packed inside the hide, perched on the edge of our seats, lips locked together in a charged silence. A sound amplification system allows us to hear every crunch and roar from the forest via headphones, reminding me of one of those spa-like chill-out CDs.

About 1000 bears make Finland their home and thanks to the area’s proximity to the Arctic Circle, the long hours of daylight increases the chances of spotting the nocturnal animals.

Before setting foot in the hide – a 30-minute walk through untamed woodland – we had voiced our fears about becoming a hungry bear’s tasty picnic if we came face-to-face with one of Finland’s largest carnivores. “Brown bears are not as willing to come close to humans as grizzly bears,” says our guide Sabrina.

BOOK A TOUR OF FINLAND

That’s a relief because I didn’t think I would stand a chance against a portly 350kg bear who can run up to 60km/h.

“If you ever meet a bear, don’t climb, swim or run. Clap your hands or jangle keys and it will run away. Alternatively play dead and protect your neck. Or put your backpack on the floor and walk backwards slowly,” Sabrina adds.

In fact, bear attacks in Finland are rare. The last fatality was nine years ago when an unlucky jogger got in between a mother and her cub.

After just an hour in the hide, we hear an unmistakable growl and a bear slopes out of the forest. Our cameras snap away as the bear stretches, snorts and trudges towards us. With a sleek chocolate-coloured coat of thick fur, the bear’s round Mickey Mouse ears give him a comical quality.

He’s soon so close I can see flies buzzing around his fur and see him sticking his tongue out as he munches on the tasty meal the guides have left out for him.  At one point, I swear that furry chops is making eye contact with me. We sit statue-still as he rubs his giant butt on the edge of the hide.

Suddenly, the bear stops, sniffs the air and runs off into the forest. We’ve been well and truly smelt.

To warm the cockles, we’re given a shot of terva schnapps, a smoky blend of honey and pine tar. But it’s not long before another bear strides out of the forest. Sabrina tells us this old girl with matted fur, is known locally as Valeri.

I don’t see any more bears until I’m at Helsinki airport on the way home. I pop into the shop and see a smiley-faced bear staring back at me from a tin marked ‘bear meat’. 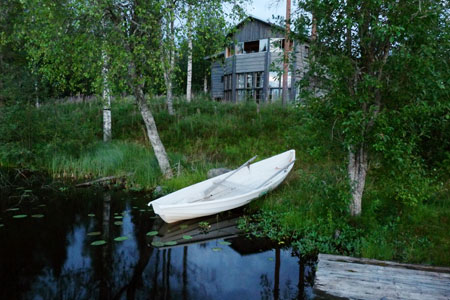 » Janine Kelso travelled with Explore (0844 499 0901, explore.co.uk). The four-day ‘Brown Bear Weekend’ departs regularly between May 27 and August 5. Prices begin at £749, including flights, transport, half board and a tour guide.

Is the Aussie student diet killing you?