Bec de Rosses is one of the most infamous mountains in the Swiss ski resort of Verbier and is the annual Xtreme Verbier is a chance to watch some hardcore pro freeriders. Daniel Landon checked it out for some less extreme skiing.

Looking towards the north face of the Bec de Rosses, a fabled mountain in the Swiss ski resort of Verbier, I ask a friend whether the extreme skiers and boarders zoom down the left- or right-hand side of the mountain. “Neither,” she replies, “they go down the middle.”

‘Simply not possible’ is the first term that springs to mind. How anyone could navigate a slope that’s so steep and so strewn with jagged rocks and cliffs, that it looks more suited to rock climbing than skiing or boarding, is beyond me. But it’s a chance to watch some of the world’s most hardcore athletes taking on the Bec de Rosses – along with the opportunity for some not-so-extreme skiing of my own – that has brought m­e to what’s known as Xtreme Verbier.

Luxury skiing at bargain prices in Morzine
Ski in Scotland

Every March, Verbier hosts the competition, which is the final round of the Freeride World Tour, which since 2007 has brought together the leading top male and female extreme skiers and snowboarders for events around the world. 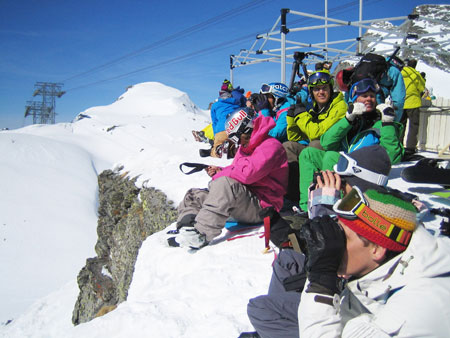 From the safety and comfort of a viewing area opposite the Bec de Rosses, the danger is obvious. Some of the riders jump off 50ft cliffs, others launch blindly off a ridge without seeing their landing point, while others prefer extreme speed. But unlike a regular, groomed slope, a mistake on the Bec de Rosses can be fatal. A mistimed jump could leave the rider splattered on a rock, while the slope is so steep – 60 degrees in some places – that anyone who crashes will simply keep tumbling down.

But there are no such worries in the women’s final, as the riders make their way – after some hair-raising jumps and turns – to the finish area.

Then it’s the turn of the men, the first dozen or so riders leaving myself and the other spectators scratching our heads at the bravery on show. That is until one crashes badly after jumping a 30ft cliff. It seems like an eternity until he raises a hand to show he’s OK, before the rescue chopper arrives to winch him away.

Even if you’re not a wannabe freerider, Verbier has plenty to keep you interested. Made up of four linked valleys, it has has no shortage of places for beginners and experts alike. There’s snow-sure skiing on the 3330m-high Mont Fort, and plenty of challenging black (difficult) and red (intermediate) runs on the higher slopes.

Meanwhile, down low are some lovely blue (easy) runs through the trees that are perfect for novices.

But a word of warning: if you do watch the pro freeriders in action don’t let their skill supercharge your adrenalin the next time you strap on the skis or board.

I try some extreme antics of my own on the run down to the resort and end up having a crash or three. While I didn’t need a rescue chopper, I was sporting two serious bruises that night. Which, embarrassingly, was two more than the event winners sitting across the bar toasting their victory. 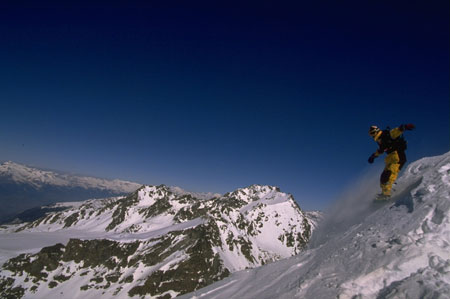 ■ Zermatt. A magnificent, car-free resort that sits under the majestic presence of the Matterhorn. The skiing is excellent, and it links in to the Italian resort of Cervinia.
■ St Moritz. Expect to see plenty
of cash being flaunted in the top-end restaurants, spas and boutiques at Europe’s king of on-snow bling.
■ Jungfrau. Postcard-perfect villages, particularly Grindelwald, Murren and Wengen, set among the majestic peaks of the Eiger-Monch-Jungfrau range.
■ Davos Klosters. These linked resorts are the place to bump into people who are rich, famous, powerful and/or royal.

WHEN TO GO: The Nissan Xtreme Verbier is on March 18-20, 2011. The ski season runs from December to April.
GETTING THERE: Geneva is the closest airport. It’s two hours by train to Verbier.
GETTING AROUND: Verbier is compact and easily explorable on foot.
VISAS: South Africans need a Schengen visa.
CURRENCY: Swiss Franc. 1 GBP = 1.51 CHF.
LANGUAGE: French, but English is widely spoken.
GOING OUT: A beer costs around ¤5.
ACCOMMODATION: There are a couple of lodges offering dorm accommodation (from 34CHF per night), along with plenty of super-swish hotels. Verbier.ch lists the options.
GET MORE INFO: verbier.ch and freerideworldtour.com.

A renter’s guide to French London