I’m getting kitted up, ready for battle. I’m wearing a boob protector, a white overcoat, a heavy metal-meshed helmet and holding a skinny sabre.

No, it’s not for a kinky Star Wars fight, I’m trying my hand at fencing – which is enjoying a resurgence thanks to the 2012 Games.

Weekly lessons with the London Fencing Club have attracted four times as many attendees since the Olympics finished. People have realised it’s a quirky way to keep fit while being entertained during the process.

The classes are held in the basement of an east London leisure centre.

I had expected to walk into a scene like the Three Musketeers doing battle with Zorro, but instead, there are about 20 people lunging back and forth wearing leggings, with one hand on a hip and the other pointing at themselves in a mirror.

“Lunge! Lunge!” instructor Alex Bela barks in my ear as I struggle to hold the pose for a second longer.

He pinches my back. “Stand up straight! After my class, you won’t be able to walk,” he bellows threateningly.

I’ve been crouching for 10 minutes now with my hand on my hip, feeling like some kind of constipated queen. But if I can get past this stage, I’ll be allowed to battle with a real weapon, so I persevere.

At the sidelines, stern-faced fencers are waiting for the advanced class. Some are wearing leotards, white trousers and braces, while others have Ringo Starr-type moustaches.

It all seems a bit Clockwork Orange. I’m worried that these shady looking chaps are about to be handed swords.

“Fencing burns as many calories as running or swimming,” says Tim Gadaski, as he teaches us the correct fencing stance and how to advance, retreat and lunge.

“It’s done in short bursts of activity rather than a continuous hard workout. Research suggests this is better for health benefits.”
After what has been a terrifying warm-up, I’m ready for battle.

Fencing master Silviu Florescu leads me into my first duel.

Hit! I manage to get him. We carry on our fight for about five minutes, and I can feel the sweat dripping off me, but I’m already hooked.

I assume the posture for battle again, ready for the fight – mincing around has never been so demanding but so much fun. 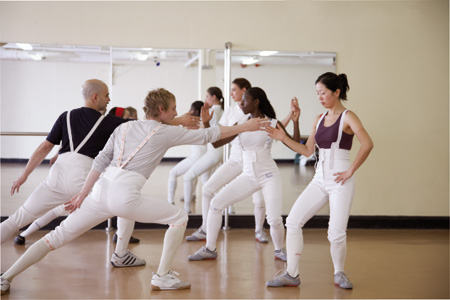 What: Archery has been around for centuries but is back on the agenda after the Games. Offering a target-hitting-buzz, it’s good for toning biceps and forearms plus increasing flexibility and strength. Join London Archers and shoot through winter.

What: Learn how to get medieval on someone’s ass at the Schola Gladiatoria, a historical European martial arts group teaching longsword skills and defence against daggers. Oo-er.

What: Nunchaku (or nunchucks) instructor John Albury will teach you how to use this kung fu movie-style weapon in a one-to-one lesson.

He’ll go easy on you at first, and use foam and pads, then he’ll move on to the real thing. Be prepared.

Where & when: Choose a location and book your lesson. Each session costs from £25.