The first ever Christmas dinner in a tin (the cleverly named ‘tinner’) has been invented by a retail company that is worried about gamers missing out on valuable time with their consoles by stopping to eat.

The Christmas Tinner can includes nine layers of festive food, from eggs and bacon to turkey dinner with all the trimmings, and even a Christmas pudding. There’s also a ‘without sprouts’ version in case greeny goodness from a can sounds like too much to handle.

The Tinner retailers, GAME, believe their invention will be welcomed with open arms due to new research which suggests that almost half of the nation’s gamers plan to spend Christmas Day on their new consoles. And, really, who has time to sit and eat when the Playstation beckons?

Alisa McKnight, marketing director of GAME, said that this Christmas is going to be ‘epic’ for gamers, especially if a new PS4 or Xbox One console is lurking under the Christmas tree. ‘For those who can’t wait to get stuck into their latest goodies, the Christmas Tinner is our gifting solution combining the best of both worlds,’ she explained. ‘Gamers can feast on the latest releases and the finest food at the same time.’

Design student Chris Godfrey, who created the troubling foodstuff, said: ‘I tried to ensure when creating the menu that all the flavours complemented one another.’ Good luck with that, Chris. 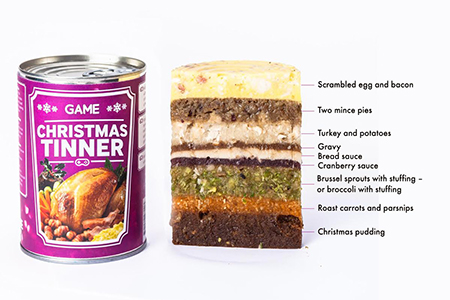