Belfast’s murals: a tour of The Troubles

Belfast has become one of the UK’s hippest cities. TNT’s Janine Kelso takes a tour.

Buoyed by a welcome period of calm, Belfast has emerged from its troubled past as one of the UK’s coolest cities. From its territorial murals to its Peace Wall, many of the legacies of its turbulent history have become star attractions for tourists who are visiting in their droves, drawn by the city’s edgy charm and stellar nightlife.

Wrong side of the fence

West Belfast is a microcosm of “The Troubles”, with a Peace Wall dividing the infamous Shankill estate and Falls Road districts, once the scene of bloody violence during the 30-year conflict in Northern Ireland. Visit the area with Big E’s Belfast Taxi Tour, led by drivers from both the Protestant and Catholic communities to help visitors gain a greater insight into both points of view.

The bleak working-class Shankill estate is a Protestant enclave, its end-terrace walls plastered in pro-British murals: think Union Jacks, gunmen and the face of Protestant hero William III, who triumphed over the Catholic James II at the Battle of the Boyne in 1690.

On the other side of the Peace Wall is the Catholic Falls Road district. Houses that back onto the Wall have wire mesh cages protecting their homes from attack, a design comically referred to as the “Belfast conservatory”. Backing onto the Peace Wall is a garden, which pays tribute to civilians who died in the conflict.

Nearby are murals that praise to the 10 Republican martyrs, including Bobby Sands, who died after going on hunger strike in 1981.

“The murals are a big part of our history and culture,” Eamonn of Big E’s Belfast Taxi Tours says. “The murals used to all promote violence, but now many of them don’t, which shows how Belfast has progressed.”

The legacy of Belfast’s violent past has left its mark in unexpected ways.

This is unsurprising given Belfast’s bloody past where shooting the enemy in the kneecap was a common and brutal means of attack among paramilitaries. 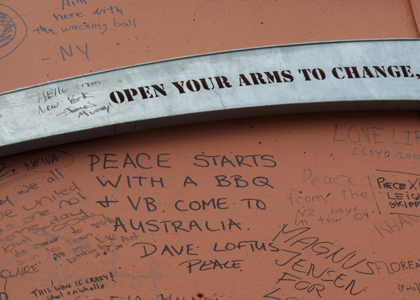 Dividing the loyalists and the nationalists is the Peace Wall, known locally as the “Berlin Wall of West Belfast”. Installed in 1972, it was erected to stop terrorism. When the wall was first erected, paramilitaries would hurl petrol bombs over the top of it, prompting authorities to add razor wire to raise its height.

Although peace has reigned for several years in Belfast, the wall won’t be coming down any time soon. Even today, the wall’s gates are closed during evenings and weekends.

The Peace Wall is coated in art and graffiti, some of which offer solutions to solving Belfast’s troubles.

“Peace starts with a BBQ and beer: Come to Australia,” suggests one visitor.

The Giant’s Causeway is one of the UK’s greatest natural wonders and is an iconic image of Northern Ireland. According to ancient Celtic legend, the Giant’s Causeway was built by Irish ogre Finn McCool to enable him to do battle with a Scottish rival. But scientists say that the honeycomb-like formation of six-sided basalt columns were formed by volcanic eruptions more than 60 million years ago.

Whatever you choose to believe, the Causeway should be included in any visit to Northern Ireland. Those with a head for heights can cross the nearby Carrick-a-Rede rope bridge which swings over a 20m wide chasm, and was traditionally used by salmon fishermen. 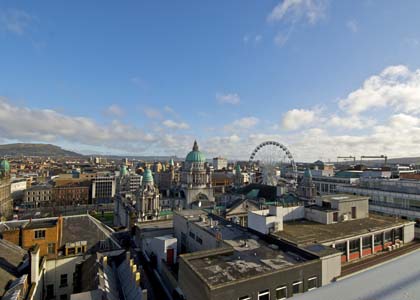 WHEN TO GO: Anytime. Winter is mild, summer is sunny.
GETTING THERE: Fly direct to Belfast with Ryanair or EasyJet.
GETTING AROUUD: Belfast is easy to explore on foot. Go on a black cab tour of the city with Big E’s Belfast Taxi Tours (big-e-taxitours.com).
GOING OUT: A beer is £2.80.
ACCOMMODATION: Dorm rooms cost from £11 a night.
GET MORE INFO AT: gotobelfast.com

Half a million Japanese people evacuated as storm approaches