When: June 10-12
Where: Seaclose Park, Newport, Isle of Wight
The Vibe: IoW has hosted the likes of The Rolling Stones, Bob Dylan And The Band and Jimi Hendrix – go to be a part of rock n’ roll history.
Line-up: Foo Fighters, Pulp, Beady Eye, Kasabian, Iggy And The Stooges, Kaiser Chiefs, Plan B, We Are Scientists, The Courteeners.
Tickets: Weekend ticket with camping £175 (Sold out).
» isleofwightfestival.com

When: June 10-12
Where: Donington Park, Castle Donington, near Derby
The Vibe: No frills, just a good old-fashioned rock show putting some serious power players on the same stage.
The line-up: Alice Cooper, Def Leppard, Pendulum, Korn, Linkin Park, Cult, Darkness, Thin Lizzy, Funeral For A Friend, System Of A Down.
Tickets: Weekend ticket with five-night camping costs £190.
VIP Options: For £380, you can purchase R.I.P. tickets, which grant you access to the best camp grounds complete with creature comforts.
» downloadfestival.co.uk

When: June 22-26
Where: Worthy Farm, Pilton, Somerset
The Vibe: Glastonbury has everything from chill-out jazz zones to upbeat dance districts with plenty more in between, so it will feel like you’re visiting a small kingdom rather than a festival.
Line-up: U2, Coldplay, Beyonce, Anna Calvi, BB King, Big Boi, The Chemical Brothers, Crystal Castles, Elbow, Everything Everything, Friendly Fires, Fleet Foxes, Gruff Rhys, Janelle Monae, Mumford & Sons, Primal Scream and Warpaint.
Tickets: Sold out.
VIP Options: None.
» glastonburyfestivals.co.uk 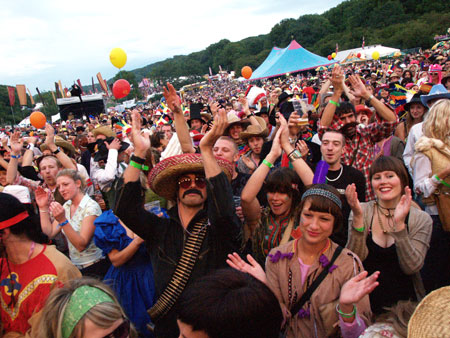 T in the Park

Lounge on the Farm

When: July 8-10
Where: Merton Farm, Canterbury, Kent
The Vibe: A relaxing set of gigs in the Garden of England. Many big-names got their first start here.
Line-up: The Streets, Ellie Goulding, Echo & The Bunnymen, Example, Katy B, Graham Coxon, Devlin, Jamie Woon, Cornershop, Johnny Flynn, Joy Formidable, Caravan, Bob Log II.
Tickets: Weekend passes will set you back £105.
VIP Options: Camp in a stylish tipi or yurt, which are located a comfortable distance from the bustling concert area. Prices start at £500.
» loungeonthefarm.co.uk

When: July 8-10
Where: Knebworth House,  Stevenage, Hertfordshire
The Vibe: With metal’s Big Four together in the UK for the first time, making this year’s Sonisphere a metalfest to end all metalfests.
Line-up: Metallica, Slayer, Megadeth & Anthrax, Biffy Clyro Slipknot, Limp Bizkit, Sisters Of Mercy, Bill Bailey, You Me At Six, Sum 41, House Of Pain, All Time Low, Fozzy, The Mars Volta, Opeth, Killing Joke.
Tickets: £170 with camping.
VIP Options: Rock Royalty passes give you the standard debauchery plus a private campsite, free shuttles to the concert area, hot showers, flushing toilets, a pamper parlour and access to the beer garden. Did we mention there’s also a free goodie bag? Tickets From £330.
» sonispherefestivals.com

When: July 14-17
Where: Henham Park, Southwold, Suffolk
The Vibe: Latitude is more than just a music festival – it’s a cultural experience.
Line-up: The National, Paolo Nutini, Suede, Anna Calvi, Echo And The Bunnyman, Chapel Club, The Vaccines, The Raghu Dixit Project.
Tickets: Weekend ticket with camping will cost you £170.
VIP Options: Leave your camping gear at home and stay in style with boutique camping, which offers pre-pitched tents and pods, access to the best amenities, and a cosy cafe just down the way. Luxury festival packages start at £115.
» latitudefestival.co.uk

When July 15-17
Where Guildford
The Vibe A hippie haven for blues and folk, it’s been called one of the most laidback and friendly festivals of the year.
Line-up James Blunt, Razorlight, Erasure, Public Image Ltd, Peter Andre.
Tickets £130 for weekend tix and camping passes with fees.
» guilfest.co.uk

When: July 29-31
Where: Charlton Park, Wiltshire
The Vibe: A true celebration of the musical arts featuring creative and traditional talents from all over the world. In proper festival spirit, there
are interactive workshops so spectators can get involved.
Line-up: Rodrigo y Gabriela, Baaba Maal, I Am Kloot, Nomfusi & The Lucky Charms, Danyel Waro, Nidi D’Arac, Pacific Curls, Bomba Estereo.
Tickets: A weekend pass with free camping costs £135.
» womad.org

When: July 29-30
Where: Long Marston Airfield, near Stratford-upon-Avon, Warwickshire
The Vibe: It’s as close to a good old-fashioned rave-up in the countryside as you can get. Some 150 DJs in 16 arenas … don’t forget your white gloves.
Line-up: Pendulum, Tinie Tempah, Chase & Status, Underworld, Eric Prydz, Axwell, Labrinth, YasmIn, Steve Angello, Professor Green, Beardyman, Jaguar Skills, Sasha, Joris Voorn, Funkagenda.
Tickets: £99 for early birds.
VIP Options: For an extra £80 you can upgrade for fast-track admission, priority parking, a separate campsite, luxury bathrooms and access to the VIP area at shows.
» globalgathering.co.uk

When: August 5-8
Where: Eastnor Castle Deer Park, Ledbury, Herefordshire
The Vibe: They don’t call it The Big Chill for nothing. Expect a laid-back groovefest with some thorough entertainment.
Line-up: TBC
Tickets: Details TBC.
» bigchill.net/festival

When: August 19-21
Where: Glanusk Park, Brecon Beacons, Wales
The Vibe: It’s known for its unique summercamp feel, with bonfires and festive ceilidhs. Keep an eye out for secret gigs.
Line-up: Fleet Foxes, Explosions In The Sky, The Low Anthem, Bellowhead, Holy Fuck, The Burns Unit, Villagers, Polar, Bear, Robyn Hitchcock, Wild Nothing, Sic Alps, Dry The River, Tweak Bird, The Leisure Society, Lia Ices.
Tickets: Weekend tickets with camping from £135.
VIP Options: Make a long weekend of it with a Holiday Ticket, an extra £40, which allows you to enter the campsight three days before the start of the festival.
» thegreenman.net

When: August 11-14
Where: Standon, Hertfordshire
The Vibe: A themed festival, this year’s being God and Monsters, that encourages the audience and performers to participate. It’s a great chance to see some break-through acts that could be headlining major festivals in years to come. Oh, and there’s a pool.
Line-up: Spiritualized Battles, Penguin Cafe, John Cooper Clarke, Saul Williams, Errors, Caravan Palace, The Correspondents, Born Ruffians, Trophy Wife, Malachai, Brassroots, Raghu Dixit.
Tickets: It costs £120 for a weekend pass.
» standon-calling.com