Bilbao rocks: From music festival BBK Live to the Guggenheim, the Basque city is a seductive mix of the new and the traditional

Well, it is on the same land mass, marked by the same international borders, about 400km from Madrid. It is more specifically, however, in the Basque Country.

This small but pertinent detail has come to define this proud, passionate city and its people. As the playful saying often found in restaurants and bars in the city declares: “Remember, you are not in Spain. You are not in France. You are in Basque Country.”

Bilbao, on Spain’s north coast, is the capital of the province of Biscay. It’s green and enjoys moderate summer temperatures compared to the south.

Even more distinctive is the charged political opinion of 70 per cent of the population who want the Basque’s culture and language preserved and the region recognised as their own independent land.

Bilbao’s previous role as the region’s chief port made it the gateway into the country but, as I find, this docklands past is very much that. I take a boat tour down the river Nervión and see the largely abandoned quays derelict and forgotten.

As is the way with many post-industrialist towns and cities, though, Bilbao has undergone a cultural regeneration. 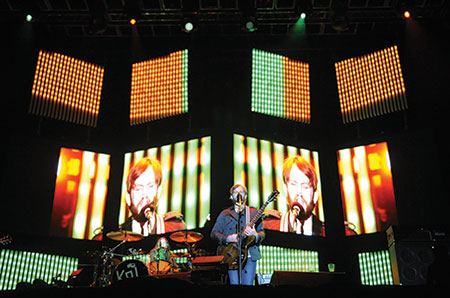 Kings of Leon playing at this year’s Bilbao BBK Live

This extends from the world-class Guggenheim Museum Bilbao to one of Europe’s most exciting new music festivals, Bilbao BBK Live. The latter launched in 2006 and has swiftly become an unmissable event to rival the likes of Glastonbury.

Set on the banks of Mount Cobetas, The Police, Guns ‘n’ Roses and Pearl Jam are among its alumni. I was here last year for Radiohead (grumpy and overly ‘worthy’), The Cure (stunning, showing why pale-as-only-a-Brit-goth-can-be Robert Smith’s band are so revered) and Garbage (back and rejuvenated).

This summer serves up another rock onslaught with the sexed-up Kings Of Leon, punk-rockers Green Day and electro-legends Depeche Mode headlining the bill.

While its panoramic views stun and laid-back vibe permeates, the milder summer here means you won’t bake like at Spain’s other big music fest, Benicàssim.

It also takes place just after the Running of the Bulls festival in nearby Pamplona, making it a convenient stop-off, and is close to a number of top beaches that dot the northern coast, including legendary surf spot Mundaka.

The fact that bands don’t take the stage until sundown also means you can explore Bilbao at leisure by day. This gives you ample chance to visit the city’s other big draw, the Guggenheim. Opened in 1997, its cultural cache is significant. 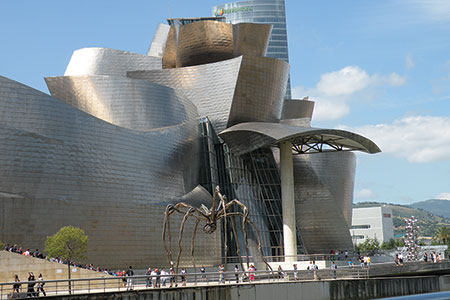 Last year just shy of a million people visited. Sat entrancingly on the river bank, it’s clear to see why the Guggenheim is a global tourist attraction. Its jagged, bulbous architectural exterior makes it a prominent addition to the city.

At one end, I’m greeted by a large, metallic spider, which is New York artist Louise Bourgeois’s travelling Maman sculpture. Its eight limbs arch up into the sky and offer up the perfect holiday snap (I have to wait my turn before stepping underneath it to strike a pose).

Just walking around, it’s clear architecture is a key ingredient in this city’s reinvention. While buildings from the past line the roads, I find modern designs and creations at every turn, not least in the 13 bridges criss-crossing the river.

Where Spain’s known for its tapas, the Basque is famed for its pintxos – traditional dishes of toasted bread on which pretty much anything goes. 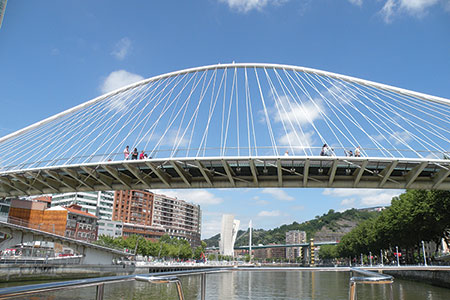 Zubizuri foot bridge near the Guggenheim

Where you’d have a pint and pack of pork scratchings in a London boozer, in Bilbao you’d take a glass of rioja with one of these tasty morsels. It’s a tradition which immediately wins me over.

The atmosphere’s relaxed – take what you want and say how many when you pay. Trust is a given; it’s a welcoming store-client relationship I wish I could take home.

The best place to find gastronomically gallant pintxos, I discover – having sampled a lot – is along the Old City’s steep-sided, narrow streets and the Plaza Nueva in particular.

It’s clear this town is intent on forging a new, globally renowned identity for itself through its art, architecture and an all-the-way-to-eleven rock fest. It’s keen to shake free some elements of its past, but intent on holding on to others with unswaying determination.

It is this mix of past and present I find so enticing, so distinct. And that’s why Bilbao rocks!

Fly direct from London Gatwick to Bilbao from £169 return with Vueling. 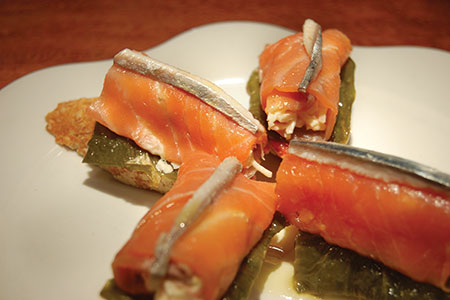 Budget: Take a stop at any of the restaurants in the Old City’s Plaza Nueva and snap up some pintxos with the locals. Dishes start from around £4. They are so affordable and tasty you’ll be going back again and again. Bar Zuga in the square caters for a young, trendy crowd, too. From £4 per dish. (Plaza Nueva, Casco Viejo, Bilbao)

Midrange: Tuck into some pintxos while standing at the bar with the locals at Cafe Iruna, a good value and culture-driven restaurant. Pintxos from £13.75 for a ‘workers menu’ – which we assure you is far better than the name sounds.

Luxury: If you want to try some luxurious, traditional Basque dishes, check out Zortziko, a mighty impressive restaurant in a matchingly commanding 19th-century mansion. Inventive, playful and utterly delicious – you’ll forget eating festival food in no time. Three courses from £51. 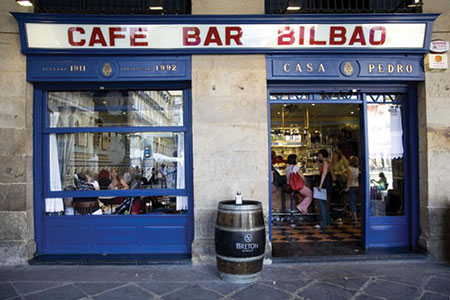 Budget: Cafe Bar Bilbao (above) sits in the corner of Plaza Nuevo and alongside the pintxos – it’s big here, have you noticed? – there are all manner of choice local reds to get to grips with. So grab a glass and get localised! From £2.

Midrange: Proud of its wine list, Old City drinking establishment Taberna De Los Mundos will bowl you over with choice. Its intent on offering wide-ranging drinks extends to its beers too, with a wealth of imported and local brews, and light to dark options as well. From £6.

Luxury: The gastronomic-pushing Irrintzi takes a creative approach to its pintxos and its drinks, with a wide variety of wines and beers, but is even more noted for its thirst-quenching cocktails. From £12. 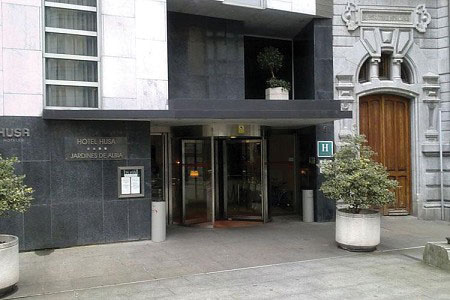 Budget: Want to explore the city and enjoy the fest but don’t want to lay in a hot, sweaty tent or fork out mucho dinero, too? Moon Hostel Bio Bibli has a great central location, and will cost you about as much as a single beer at the fest! From £9pn.

Midrange: Also in the Old City is Hotel Bilbi, which is perfectly placed for getting into the local pintxos – Plaza Nueva is just round the corner. Private bathrooms with all of the amenities you need are part of the deal. Great for exploring the city in comfort. From £29pn.

Luxury: The four-star Spa Hotel Jardines de Albia (above) is smack-bang in the city centre and offers a cut above standard: generous-sized rooms (and bathrooms), ace service and, as the name suggests, spa facilities so you can chill out in style. Great for seeing the Old City and with good transport connections. From £65pn.

Key would have conceded if NZ First held balance