By definition of its victory it can now claim the unofficial title of world’s ugliest animal. The society started life as a science-themed comedy night and came up with the mascot campaign in order to draw attention to more ‘aesthetically challenged’ threatened species.

The winner, the blobfish, was announced at the British Science Festival in Newcastle. Simon Watt, biologist and President for Life of the society said: “we’ve needed an ugly face for endangered animals for a long time and I’ve been amazed by the public’s reaction. For too long the cute and fluffy animals have taken the limelight but now the blobfish will be a voice for the mingers who always get forgotten.”

He added that he hoped the campaign would draw more attention to the threats facing these creatures. “Our traditional approach to conservation is egotistical. We only protect the animals that we relate to because they’re cute.”

He also hoped that the vote would bring a lighter side to conservation. “It’s the most depressing type of science to be involved with. It’s basically working out: What died today?”

For the campaign Mr Watt worked with comedians, each of whom created a YouTube campaign message for their chosen animal. The society then asked the public to vote for their favourite.

The blobfish won by 10,000 votes. It is an impressively ugly creature that lives of Australia’s south-eastern coast and Tasmania, at depths of between 600 and 1,200m. Its gelatinous body is only a little denser than and it mostly spends its life “bobbing around” in the deep feeding on crabs and lobsters. It suffers a significant threat from fishing trawlers and so has earned itself endangered status.

But what other species lost out to the number one blobfish? Here are the remaining animals in the top five: 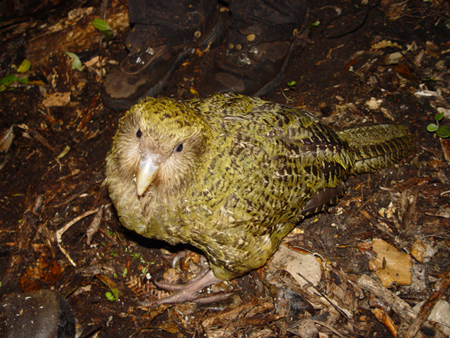 2. Kakapo – The only flightless parrot in the world, its heavy weight and muscly thighs make it a land bird. This was OK in a pre-civilization world. Now they share the ground with predatory mammals. The problem is the sweet and shabby Kakapo hasn’t evolved a fear response. It gets eaten. A lot. 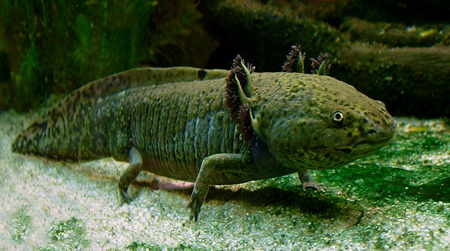 3. Axolotl – An otherworldly-looking type of salamander that remains aquatic its entire life in a perpetual state of larval development and can regenerate lost limbs. This strange ever-young mutant is endangered due to Mexico City’s urbanisation and polluted waters. 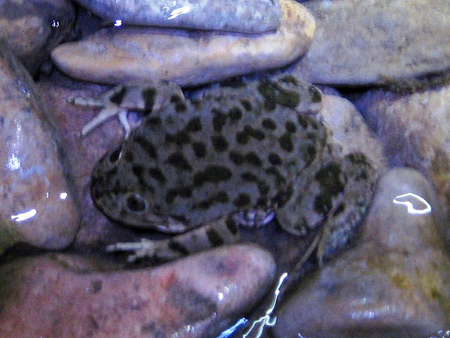 4. Titicaca Water Frog – This is the largest truly aquatic frog, which is a claim slightly undermined by the fact its Latin name translates as ‘aquatic scrotum’. The multiple folds in its skin enable this fascinating little beastie to breathe underwater without needed to surface for air. Its problem? It only lives in Lake Titicaca.

5. Proboscis monkey (top) – Pot-bellied and with an enormous floppy nose – the bigger the nose the more ‘attractive’ a mate – the male Proboscis monkey looks more like a human male who has let himself go. To make matters worse, the species’ diet of unripe fruit makes it quite the flatulent creature as well.

Carly Waterman of the Zoological Society of London’s Edge species programme, which tries to highlight and conserve evolutionary ‘one of a kind’ species, had praise for the campaign saying that raising awareness for less “traditionally charismatic animals” was key.

“A large proportion of the world’s biodiversity is being overlooked. So flying the flag for these species is a really positive thing.”