New Routemasters buses were unveiled today by Boris Johnson and Londoners are up in arms over whether the new bus is public transport gold or simply a massive waste of tax-payers money.

The slinky double-decker is a re-model of the iconic Routemaster which went out of service five years ago.

Original Routemasters had an open back door – meaning those with a death wish could run along behind and jump on – as well as a staircase at the back of the bus.

Boris’s flashy new model sports two staircases as the “open platform” door at the back will be closed if there is no conductor working to collect fares and scan Oyster cards. 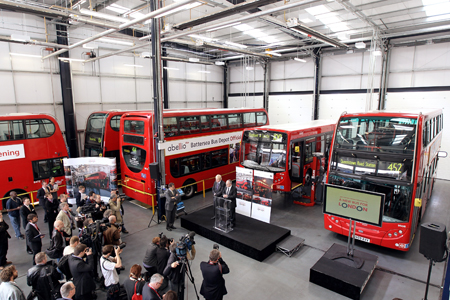 Boris himself is pretty chuffed with his new bus, telling passengers to expect a “greener, light and airy” service when the first buses are rolled out across London in 2012.

“When Londoners are worrying about their jobs going, services being cut, and their taxes going up, this could look like a very expensive bit of folly from a mayor who is out of touch with ordinary Londoners,” said Val.

The first five models of the bus will cost £7.8m. A spokesman for the mayor said the initial cost of the buses included design and development, research, prototypes and testing. The cost was expected to drop to about £300,000 per bus as “hundreds” came into use in the coming years.

London has been Tweeting itself silly about the new Routmaster this morning, with two clear sides emerging.

Yrotitna Tweeted: you seen Boris’s bus what a piece of junk. Retro meets star trek. Fancy wasting all that cash an estimated £300k a bus

While JoineeAnun reckons: what i liked the most about #routemaster buses was the open platform. A lot less smelly than new ones with hardly any windows!!

Are you Team Routemaster?