The BP oil spill continues to flow into the ocean, despite a cap being fitted over the broken pipe.

BP say the device has collected 16,000 barrels of oil in its first three days. However, up to 19,000 barrels a day were leaking from the pipe, so the battle isn’t over.

The leak has now flowed for seven weeks and continues to devastate around 120 miles of the southern US coast, affecting the shores of Louisiana, Mississippi, Alabama and Florida.

The US Coast Guard has warned that “dealing with the oil spill on the surface will take a couple of months” but that the process of getting oil out of marshlands and other habitats along the coast “will be years”.

BP have admitted that its bill for the Gulf of Mexico oil spill disaster now stands at more than £1billion.

Meanwhile, US comedians have turned their wit onto the British oil giant. Here are some of the gems.

“The CEO of British Petroleum says he believes the overall
environmental impact of this oil spill will be very, very modest. Yeah
— if you live in England!”
– Jay Leno

“The BP president said yesterday that the company would survive. That’s like someone running over your dog and saying, ‘Don’t worry, my car is fine.'”
—Jimmy Fallon

“When I went to lunch this weekend and ordered the sea bass, they asked if I wanted it regular or unleaded,”
– David Letterman

“Have you been following the big oil spill in the Gulf of Mexico? Or as we call it now, the Dead Sea”
– David Letterman 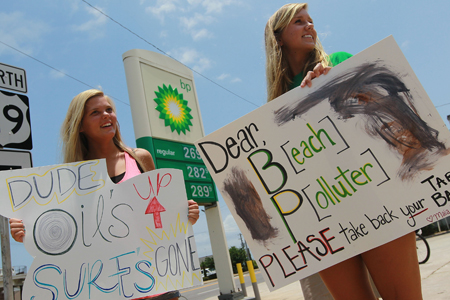