“Just hearing his name makes me stressed,” says the 42-year-old Algerian, straightening her grey headscarf and gripping the hand of her six-year-old daughter Fatima.

Breivik’s testimony this past week about how and why he slaughtered 77 people in Oslo and on the nearby island of Utoya last July has left few unaffected.

For Norway’s Muslims, though, his horrifying account has an added dimension: Breivik says he carried out his killing spree to help clear them out of the Scandinavian country, which he wants reserved for “pure” ethnic Norwegians.

“I think and hope he is alone. Most Norwegians are nothing like him,” says Naidja, who is shopping with her daughter at a large outdoor flea market in one of Oslo’s most immigrant-dense neighbourhoods – one of several described by Breivik this week as “ghettos” and “no-go zones” for anyone but Muslims.

“The Muslim enclaves in Europe will grow as aggressively as cancer until they one day make up a dominant power,” the 33-year-old right-wing extremist told the court on Tuesday.

“We are so sad to hear him. Muslims are not aggressive,” insists Mohammed Naji, 50, from behind a table overflowing with electronic gadgets he is offering for sale at the bustling Groenland flea market. 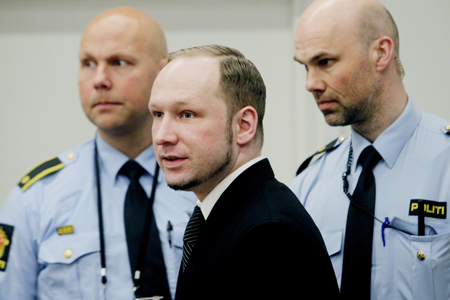 Originally from Ethiopia, Naji wears several thick jackets and a scarf against the damp cold, his hands thrust deep into his pockets.

Breivik “is alone”, he insists, stressing that “Norway is a country of very kind people. It is so strange that this happened here.”

But after Breivik spent days spelling out his Islamophobic ideology, Naji acknowledges: “Now I am worried. There might be somebody who wants to follow his lead.”

Basim Gozlan, who runs the Norwegian website www.Islam.no, insists it is a good thing that Breivik has been given so much time to explain his world view.

“I think it is good and healthy that this comes out,” he told AFP in a telephone interview, arguing that Breivik built his ideology largely on the basis of Islam-critical writings in the media and online and rumours he has heard about violent Muslims.

“This should help show people that this kind of rhetoric can be very, very dangerous. It is a wake-up call, and I think many people will moderate the way they talk about these things,” Gozlan said.

Back at the Groenland flea market, Hassana Mazzouj, 36, pushes a stroller with three children in tow.

Her brow creases with worry under her brown headscarf when asked about Breivik’s testimony. 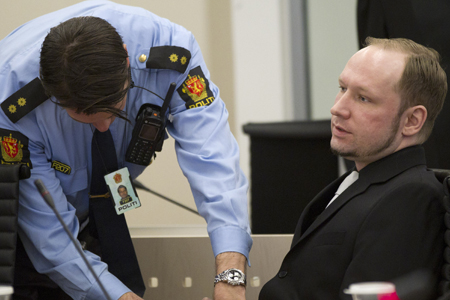 “It’s really frightening the way he talks about Muslims,” says Mazzouj. Originally from Morocco, Mazzouj has lived in Norway since 1995.

She has been following the confessed killer’s testimony through live reports on the internet, but says she had to stop on Friday when Breivik began describing in detail how he had hunted and shot dead 69 people, most of them teenagers, who were attending a summer camp on Utoya island.

“It is very painful following his testimony, and it is very, very frightening,” she said.

Saber Bessid, a 31-year-old accountant originally from Tunisia, flatly rejects Breivik’s claim that he was forced to carry out his bloody attacks because he and those who share his opinions are “systematically censored” in Norway, which he insisted was not a democracy but a “dictatorship”.

“It is okay to be against Muslims,” Bessid says. “But you don’t kill people.”

“I won’t agree with you, but there is freedom of expression in Norway. You can carry a sign saying you hate Muslims all over Oslo if you like. This is a democracy, so that is all right,” he adds. “The people (Breivik) killed were not Muslims, they were simply human beings. Innocent human beings. There is just no excuse for what he has done. It is so gruesome,” Bessid says.

Bessid has warm praise for the Norwegian reaction to the attacks.

“All of Norway really came together after the attacks. Muslims, Christians, atheists, everybody stood together and said ‘No!’ to his actions and everything he stands for,” he says, adding: “I hope God will forgive him.”

The West End Men in Concert – review: Vaudeville, the Strand

Woman mistakes penis for a bag of vegetables